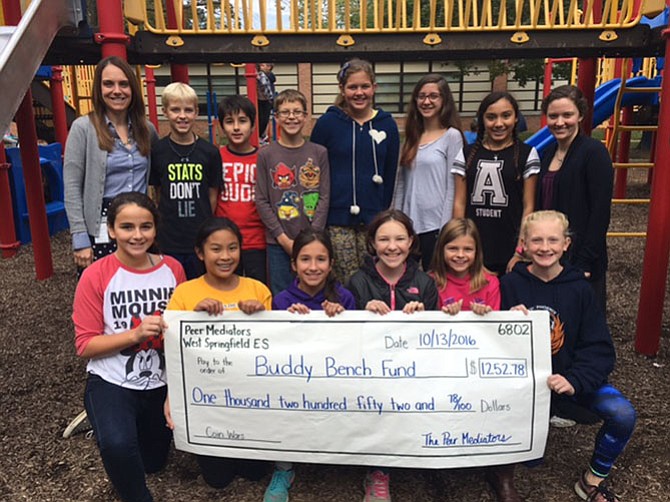 The Buddy Bench project at West Springfield Elementary came up at the end of last school year during a meeting between Dr. Kelly Sheers, Principal and Sara Fairchild, Counselor. They thought that this would be a good project for the Peer Mediators in the 2016-2017 school year.

The Buddy Bench will be located in playground area. Our students will be taught to keep an eye out and include anyone that is on the Buddy Bench.

Fairchild took the idea to the Peer Mediators and it was mentioned that funds were available for the bench but that they could also fundraise money if they’d like. They were so excited to raise money so they began to brainstorm all sorts of ideas. When student, Anne, came up with the Coin Wars, the students agreed that was the way to go. Fairchild and the Mediators worked together to solidify the rules and what the prize should be. The point system was simple. Penny = 1 point, Nickel = 5 points, Dime = 10 points, Quarter = 25 points. They came up with a way to market it on the school news and Facebook page.

The children really pushed their peers to bring in coins and spread the word. The outcome was wildly successful. The grade level winner of the Coin War was sixth grade having 37,346 points. In total the students raised more than $1,200. The bench will be on playground soon for all students to enjoy. For more information see buddybench.org.