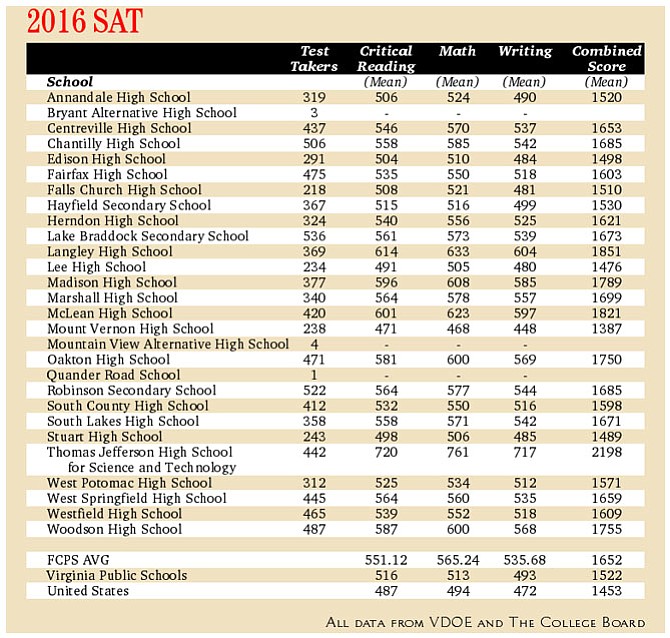 On average, Fairfax County Public High Schools performed better on the SAT college placement exam in 2016 than the Commonwealth of Virginia overall average.

Virginia students also outscored the national numbers, according to data released last week by the Virginia Department of Education and the College Board, the organization that publishes the SAT.

The two groups reported 65 percent of Virginia public school graduates took the SAT. Of that number, they said 45.2 percent earned the College Board benchmark for college readiness.

By achieving a combined score of 1550 — including critical reading, math and writing scores — the College Board believes those students stand a 65 percent chance of holding a B-average during their first year in college.

Virginia’s 65 percent beat the national average of 37.3 percent of SAT-takers reaching the benchmark.

“While the overall performance of Virginia students compares favorably with that of their nationwide peers, the wide achievement gaps visible when we dig deeper into the data remind us that outcomes are not improving for far too many students of color,” Virginia Board of Education President Billy K. Cannaday Jr. said in a statement. “Narrowing and ultimately closing these gaps is the state board’s top priority.”

THE FAIRFAX COUNTY AVERAGES top Virginia in each category, aided by uncommonly high scores from the magnet Thomas Jefferson High School for Science and Technology, which requires its own test and application process for admission.

However FCPS board chair Sandy Evans pointed out that the majority of students at Thomas Jefferson are from Fairfax County, and would otherwise be at their base schools performing at a high level.

Langley High School also posted averages of above 600 in each SAT category.

The majority of Langley’s student body in 2015-2016 was white, with just over 65 percent. Asians were second with 23.47 percent, next Hispanic and other each with about 5 percent, and black with less than a percent.

JEB Stuart High School is an example where in each category it was above the national average but below the Virginia and FCPS averages. Stuart also had about 100 fewer test-takers (243) than the FCPS average (343).

Evans highlighted Falls Church and Annandale High Schools as two facing many challenges, with some of the highest poverty rates, yet still performing above the Virginia and around the U.S. average.

“That’s really a tribute to those schools that those scores are so high,” Evans said.

Evans also observed that the new writing section scores across the board seem to be underperforming the other two sections of the test.

“I’m not sure what that says, but it might be something for us to think about,” she said.

Mount Vernon was the only FCPS school with average scores consistently below the FCPS, Virginia and national averages.

Karen Corbett Sanders, Mount Vernon representative to the Fairfax County school board, said West Potomac has seen a gradual increase in scores thanks to a PTSA-sponsored SAT prep program.

Students have the opportunity to take a mock exam for $20, get an assessment based on their results of which areas they need help in, and then enroll in a prep course through the PTSA.

THIS YEAR is the first cohort at West Potomac that will have had that opportunity.

“You have so many test prep organizations today that are really working with kids to get those scores up but a lot are expensive,” Corbett Sanders said.

The program has expanded and allowed students from Mount Vernon High School to come over and take part as well.

“It’s one of those eye-opening things,” she said. “It’s just not fair for kids who can’t afford it, but the schools and parents together are taking ownership, to make sure our kids get this opportunity too.”