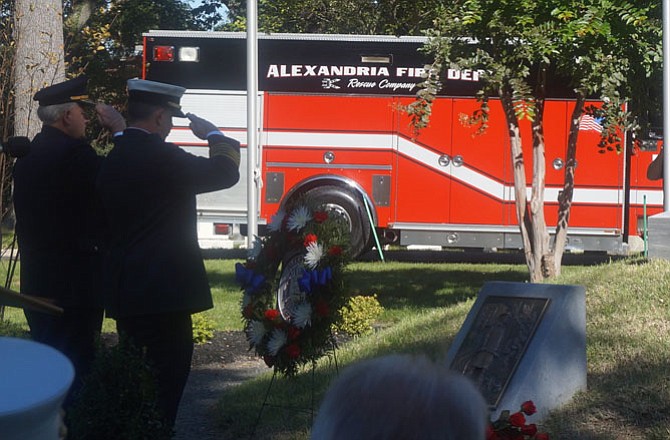 Alexandria — Alexandria’s fallen firefighters and EMS personnel were remembered by members of the city’s first responder and law enforcement agencies at a memorial service and wreath-laying ceremony Oct. 14 at Ivy Hill Cemetery as part of the annual National Fire Prevention Week ceremonies.

“We are here to honor the service, dedication and sacrifice of our first responders and remember those who have recently departed,” said Alexandria Fire Department Assistant Chief David Povlitz in his keynote address. “And we must also recognize the sacrifice and strength of the families who surround them.”

The ceremony, which dates back to 1856, honors those who have died in the line of duty and also marks the passing of members of the department who have died during the preceding 12 months.

The centerpiece of the ceremony is the Roll Call of the Fallen, a reading of the names of fire safety and EMS career and volunteer personnel who have died in the line of duty. Following the Roll Call, Alexandria Fire Chief Robert Dube and Volunteer Fire Department President Jay Johnson placed a wreath at the memorial to fallen firefighters.

Retired fire department employee Callie Terrell opened the ceremony with “The Star Spangled Banner” and closed with “The Wind Beneath My Wings.”

“We are here to honor the service, dedication and sacrifice of our first responders.”

Attending the ceremony was the family of Michael Conner, a retired assistant fire chief and chief fire marshal who died March 23 at the age of 68. It was Conner and his recruit class that first dedicated Ivy Hill’s Circle of Honor in 1970.

“I had no idea how hard it would be to be here today,” said Conner’s widow Linda, who fought back tears throughout the ceremony. “But this department — this city, really — was everything to Mike. And now he’s where he was meant to be — at rest among his fellow firefighters.”