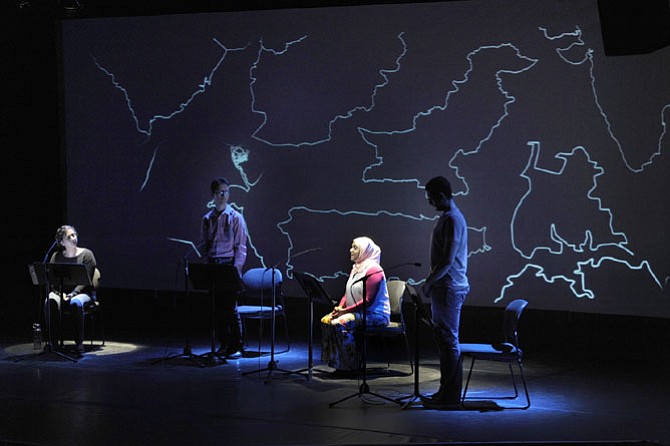 Reston’s CenterStage is bringing a singular theater work called “Beyond Sacred: Voices of Muslim Identity” to local audiences. The production will explore the diversity of experiences in America. “It is intended to make space for people’s voices who are rarely heard in our civic dialogues on local and national levels,” said Ping Chong, founder, Ping Chong + Company. 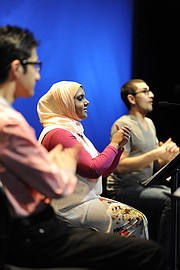 Cast of “Beyond Sacred: Voices of Muslim Identity”

“’Beyond Sacred: Voices of Muslim Identity’ intends to build bridges of understanding between people who might imagine themselves to be very different from one another, but who, in the experience of this production, realize how much we all fundamentally share,” added Chong .

Ping Chong has been honored with the National Medal of Arts, the highest award given to artists by the United States government by President Obama. Ping Chong + Company began in 1992 with productions concerned with “intolerance and xenophobia” in America.

Productions were by local communities with local participants using their own oral history that explored the intersections of race, culture, history, art, media and technology,” said Chong. A final script was developed based on the oral interviews that was then shared with an audience under the general title “Undesirable Elements.”

Ping Chong + Company has evolved to take intense looks at other aspects of inclusion or exclusion. Projects have explored topics such as disability, experiences of survivors of sexual violence, as well as peace and reconciliation work.

Sara Zatz, Associate Director, Ping Chong + Company said that new “Beyond Sacred” performance is “about creating increased understanding of human diversity and commonality—so it’s important that we select a group that brings a wide range of experiences, backgrounds, and stories to share.” In the case of “Voices of Muslim Identity’” the project is about those who came of age after 9/11 which “deeply impacted their experiences of growing up Muslim in the United States.

“Although the show is subtitled ‘Voices of Muslim identity,’ it is just as much about challenges faced by young people of color across the United States,” added Zatz.

Asked about the impact that “Beyond Sacred: Voices of Muslim Identity” performances have had on viewers Zatz said that “audiences have been overwhelmingly positive, and deeply grateful to have the opportunities to hear first-hand stories. This is true for both Muslim audience members who feel they are seeing themselves represented, but also non-Muslim audience members who are finding paths of connection to the experiences shared.”