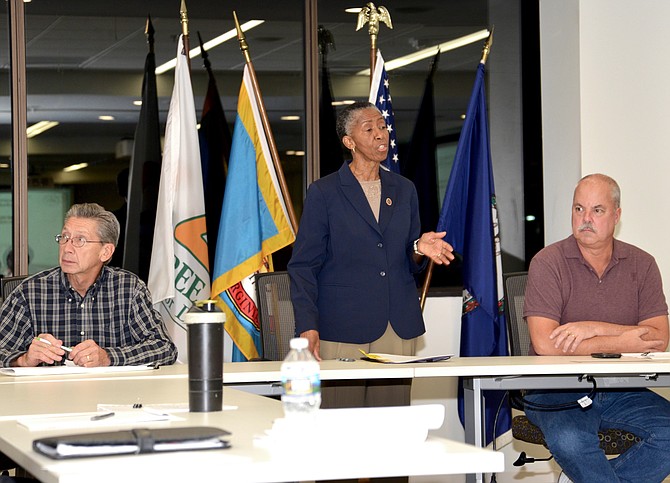 Hunter Mill District Supervisor Cathy Hudgins asked for time on the agenda at the October Reston Planning and Zoning Committee meeting. Hudgins wanted to launch a new step in the Reston Land Use process to address communications concerns that have surfaced at several related meetings over the last several months. Photo by Andrea Worker.

Reston — Things got a bit heated at the October meeting of the Reston Planning and Zoning Committee on Monday, Oct. 17.

The original agenda for the monthly meeting of the volunteer board was adjusted. Discussion of the St. John’s Wood redevelopment – a project which has brought out a cadre of citizens in opposition – was postponed until November, and a request for time by Hunter Mill District Supervisor Cathy Hudgins to “launch a new step in the Reston Land Use Process” aimed at improving communications with area residents was added.

To start, Hudgins gave a brief recap of the history of Reston’s development, the original Master Plan, and the subsequent revisions by the county that have lead to today’s guiding document, the “Comprehensive Plan.”

Describing Reston as a “wonderfully well-planned community, recognized around the county and beyond,” Hudgins stated that Reston was unique in Fairfax County for the fact that its citizens had a voice in its planning, “almost from the start.” Hudgins indicated that there was a “perception issue” regarding some of the opposition to current land use projects, noting that some of them had been approved years ago, “as far back as twenty years and discussed and approved with citizens’ input.”

THE RUMBLINGS from the attendees began at this point, with comments like “maybe things have changed just a bit since then,” and “there’s a new community here that hasn’t been heard,” before the committee called for order.

After making her remarks, Hudgins introduced Regina Coyle, Special Projects Coordinator for Fairfax County, who she had invited to explain the Land Use Application process, all its stages, and where and when the community’s input is sought. Despite the difficulties presented by the configuration of the meeting room which made the viewing of her slide presentation problematic, many agreed that Coyle was able to shed some light on a fairly complex process.

“We urge the applicant to inform the public and get input from the very beginning of the process,” said Coyle, as she described a process that was highlighted by multiple layers of internal discussions and reviews by a long list of governmental departments. The end result is the preparation of a “Staff Report” for distribution to the county’s Planning Commission and the Board of Supervisors for their review and decisions. Acknowledging that the county’s data systems are not up to speed in many instances, Coyle cautioned that not all of the related documents can be found online, but that Land Use Applications and most results are available in that format. She also reminded the audience that they could contact the Zoning Evaluation Division for information in person or by calling 703/324-1214.

Committee member Ron Weber thanked Ms. Coyle for her explanations, but commented that their group frequently did not receive the required information early enough to review before their meetings, and asked “When does the community first hear about it?” Weber expressed concern about some of the projects along either side of the Dulles Toll Road. “There doesn’t seem to be any coordination between the developers.” In some cases, he felt the projects were “putting the cart before the horse.”

Coyle reiterated that the County urges developers to get ahead of problems and concerns by meeting with resident stakeholders. She also referred to the “Supervisors’ Reports” by district, saying that these were a means by which citizens can track projects in their areas. Supervisor Hudgins agreed, saying that her monthly newsletter did include this information.

At this point, the committee invited public commentary – and that’s when the temperature in the room seemed to rise. Wearing her now signature “Reclaim Reston” t-shirt, Arlene Krieger was first up, and immediately called for the dissolution of the Reston Planning and Zoning Committee. “We don’t know you,” she said. “You have not been elected or vetted,” she continued, saying that such a group could not represent the people and that “anything you decide is illegal and null and void. We have lost our voice.”

Doug Pew of Reston next commented that the public is at a disadvantage in any hearing or input session, since the private citizen has to find time to research and make their cases without the benefit of the lawyers and field experts that represent the developers – a task made even more difficult when information is only made available to them with less than two weeks before a meeting.

Pew also expressed concern that his attendance at multiple meetings, and his reading of applications and related documents seemed to indicate a record “of exemptions to the Zoning Ordinances.” He cited projects on Michael Faraday Drive and Sunset Hills, and at Sunrise Valley and Association Drive, in regards to lack of parking, overuse of the available infrastructure and other problems. “Why are all these exceptions being approved?” he asked to a volley of applause.

John Mooney, a former Arlington County Environmental Services staff member, urged the county to be “more proactive” in soliciting citizens’ input. “We were required in Arlington to meet with the public,” he said, noting that the county and the developers often learned from the citizens, gaining win-win outcomes and avoiding costly mistakes.

Tammi Petrine, co-chair of the advocacy group Reston 2020, gave kudos to the P&Z Committee, but declared that the group was basically powerless before the county. “We are being bulldozed” and there is nothing that the Planning and Zoning Committee can do about it, according to Petrine.

Supervisor Hudgins took a moment to again point out that some of these “exceptions” and approvals are decades old, and in compliance with the density standards of the plans. She also disagreed with Petrine about the influence of the committee. Petrine, Pew, and several others asked for examples of the committee’s success in halting or calling for adjustments to applications, but none were provided at the time.

Long-time resident John Lovaas declared that Restonians are finding things out “the hard way.” Lovaas asked repeatedly for clarification about the committee, wanting to know what agency or group was the umbrella under which they operated. Committee members explained that they were once an arm of the Reston Citizens Association (RCA), but now came “under Supervisor Hudgins,” to which Lovaas replied that this arrangement “explained a lot.”

There was a heated exchange between Lovaas, committee members, and Hudgins. Hudgins and the members said that the move was because of the “rollercoaster nature” of the RCA, sometimes being active and sometimes not. Its inclusion in the Hunter Mill District system ensures “the public has this vehicle for its voice” at all times.

When Lovaas exhibited a level of disbelief at this response, committee member Michael Jennings stood to defend the group. “Please stop casting aspersions,” he said. Jennings reminded the audience that they were volunteers and that they simply wanted do what they could to protect their homes and business and way of Reston life.

A FEW OTHER locals added their opinions before the committee called an end to the presentation and the public commentary portion of the meeting and recessed before beginning discussion of the developments on the agenda. Most of the public, as well as Supervisor Hudgins, departed and left them to the business at hand.

Somewhere between the explanations and the debates, the “new step” in the Land Use Process that prompted Supervisor Hudgins’ attendance at the meeting seemed to get lost. A call to her office provided this explanation of the “launch:”

“Supervisor Hudgins will be notifying the community when new applications are filed with Fairfax County Department of Planning and Zoning. After [they] have been officially accepted, she will then coordinate with the Reston Planning and Zoning committee to schedule an informational meeting similar to the meeting held. This will help ensure the community is aware of pending applications very early in the process. Notification will be in the form of the Hunter Mill District monthly newsletter…e-blast and FaceBook.”

The Supervisor’s office says that to be included on the list, the public needs to send an email to huntermill@fairfaxcounty.gov. Information on land use applications and projects can also be found on the Reston Association’s website at www.reston.org and on the Fairfax County website www.fairfaxcounty.gov