Will be held on Labor Day on University Drive. 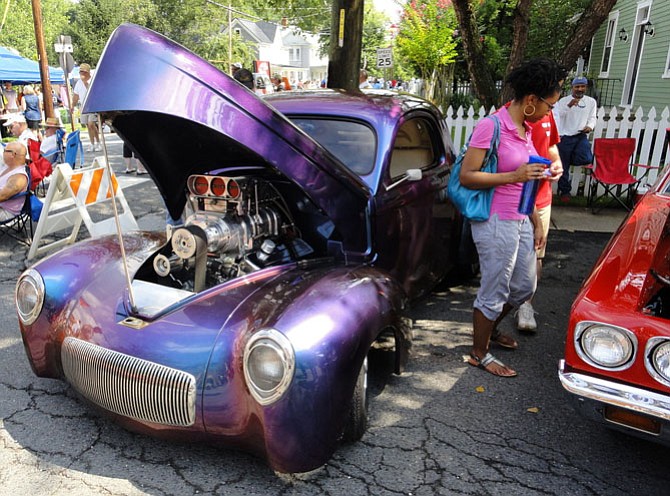 Attendees peruse some of the cars at a previous show. Photo by Bonnie Hobbs.

Cars such as these will be on display in Fairfax on Labor Day.

Two young men marvel at this 1929 Ford in a past show. 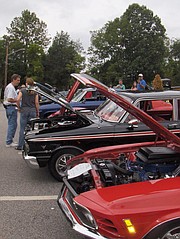 Some of the types of cars that will be shown in Fairfax. 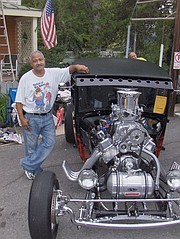 This antique car’s owner proudly stands by his vehicle.

Labor Day in the City of Fairfax will be anything but ordinary. That’s because, for the first time ever, the hugely popular Clifton Lions Club Labor Day Car Show has moved to the City.

The show attracts thousands each year and includes music, food and awards. And besides being lots of fun, the car show will also help two worthy causes. While entry and parking are free, donations will be accepted – and all proceeds will benefit the Northern Virginia Therapeutic Riding Program and Inova Hospital System’s Life with Cancer.

“It’s our 17th annual show and we hope to raise $20,000,” said event organizer Jim Chesley, of the Clifton Lions Club. “If the weather’s good, I’m expecting 450 cars. We outgrew the Town of Clifton and needed more space, and we have room for over 100 more cars in Fairfax than we did there.”

THE SHOW features nearly every kind of car imaginable, including antique cars from the 1920s and ’30s, classic and custom cars, hot rods from the 1940s and ’50s, muscle cars like Corvettes and Mustangs, foreign cars such as Bentleys, and even trucks and motorcycles. To register a vehicle for the show, go to www.labordaycarshow.org or call Chesley at 703-830-2129.

The Clifton Lions Club puts on the show, and some 70-80 volunteers work hard to make it a success. That day, they’ll also have a van on site to check people’s sight and hearing for free.

Show attendees working up an appetite will find some tasty choices for sale. Lions Club members will be serving grilled hot dogs, hamburgers and barbecue, and the Hard Times Café will host an outside beer garden. In addition, Sophie’s Pies will offer pies out of a 1920s Model A Ford truck. And a deejay will provide music.

Pleased to bring the car show to Fairfax, Chesley said, “It’s a big opportunity to grow the show, both in participants and spectators, and that allows us to help the charities more. One hundred percent of everything we make goes to them. And these charities aren’t just local, but they’re free to the people who use their services.”

He said the Lions have been in discussions with the City for about two months to determine logistics, advertising and who’s doing what. “I’ve been working with [Cultural Arts and Marketing Director] Jo Ormesher and [City Councilman] Jeff Greenfield, and they’ve both been a big help,” said Chesley. “They’re doing a tremendous job and are a pleasure to work with.”

A TOTAL of 24 trophies will be awarded, and judging will be done in front of the Fire Station 3 on University Drive. The participants will vote on the top 20 cars in the show, including the Best of Show. The Lions Club Trophy will be chosen together by the Clifton Lions Club and the Fairfax Host Lions Club. The City of Fairfax will also pick a trophy winner, and there’ll be a Lady’s Choice Trophy, too.

Chesley said the change in venue is a new challenge, but one he welcomes. “The show will still be held on the same date as always, just in a different location,” he said. “And no one else has a car show that day within 125 miles of where we are. It’s a free show; all we ask in return is that people help us out with donations to the charities. Anything they want to give is fine; we’ll have donation jars around the event, plus brochures with information about these charities.”

Hoping for a great turnout, “Chesley said, “People like seeing an assortment of vehicles, not just antiques, and we’ll have something for everybody. They’ll also have a great time seeing cars they want to have, should have had, could have had, wished they had and still dream about. And some cars will even be for sale.”