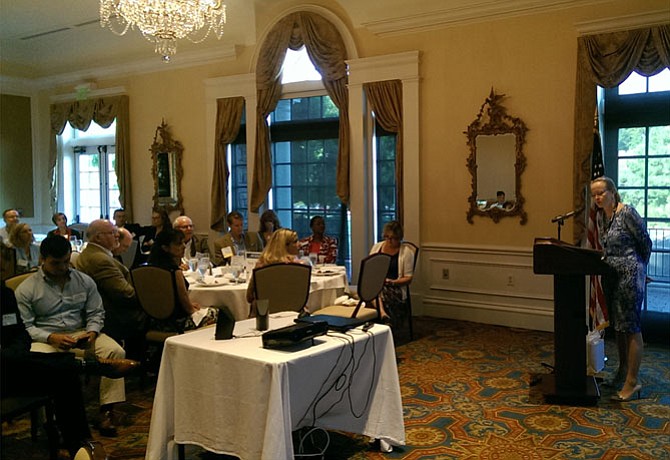 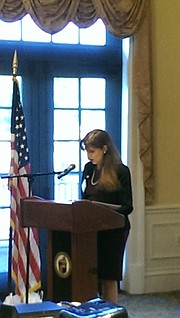 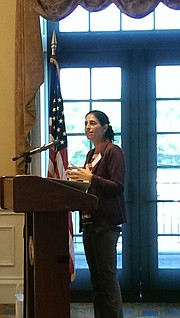 At-large school board member Jeanette Hough, a Fairfax resident, focused on FCPS needing to communicate more with members of the business community.

“I learned about empathy and coding,” was the response from one young Fairfax County Public Schools student who participated in this summer’s Science Technology Engineering Arts Mathematics lab program.

Mount Vernon District representative to the FCPS school board Karen Corbett Sanders highlighted the success of that summer activity as well as “one to one” computer trials at Mount Vernon, Lee and West Potomac High Schools while addressing members of the Mount Vernon-Lee Chamber of Commerce on Thursday, Sept. 8.

A presentation from three members of the school board was preceded by a video showing students in the STEAM summer lab program designing egg drop apparatuses and playing with programmable robots.

MAKING A STRONG CASE for students engaging with technology and the need for businesses to be partners in that process, she cited the Genesys Works organization as well.

The social enterprise Genesys Works now has a national capital region site that has just finished training a cohort of students from six FCPS schools over the summer in technology and professional skills. Each one has earned a paid, part time internship with a local tech company they will hold throughout the school year and into next summer.

“We need to continue to reinvest in our schools,” Corbett Sanders said. “And we need mentoring, internships -- for businesses to get behind our schools.”

She went on to reference last year’s campaign to fully fund the school system’s budget. “We finally made the initial investment of raising teachers’ salaries,” Derenak Kaufax said. “It’s just the beginning of where we need to be.”

From there, the Lee representative and former school board chair voiced her support for the biggest point of contention in the room that morning: the referendum on this fall’s ballot for a proposed tax on prepared foods.

It’s been estimated that the new tax would bring in an additional $100 million annually in revenue for the county, 70 percent of which Derenak Kaufax said would be dedicated to the schools.

“You value a well-educated community,” she said. “We look forward to you supporting our greatest asset, our children.”

At-large school board member Jeanette Hough, a Fairfax resident, steered her presentation away from the “meals tax.” She focused on FCPS needing to communicate more with members of the business community.

“We don’t want to be burdening our taxpayers,” Hough said. “What will help you partner with us? We want to hear more about what we can do, as a board, as policy-makers.”

Following the meeting, chamber president Jane Gandee reaffirmed the organization’s opposition to the meals tax, citing feedback and values of their members.

“I’ve not found one yet that feels this is a good move for the restaurant industry,” Gandee said.

She said some concerns she’s heard are that a meals tax, which Fairfax County could levy up to four percent on top of sales tax, might cut into tips for employees and have other unintended consequences based on diners having to pay upwards of ten percent tax on their meals.

“Great schools have a great impact on the business community,” she admitted, “but we have to be responsible to our members.”

Holly Dougherty, executive director of the chamber, added that the organization will be launching a more comprehensive opposition campaign soon.

“It would be so damaging,” she said of the meals tax, “for retirees, elderly on fixed incomes.”

Dougherty also said there’s potential for the tax to deter catering companies from doing business in Fairfax County that otherwise would’ve chosen it over other areas that already have a prepared food tax.

“You weigh that against the cost-benefit,” she said, “it shows harm outweighs any benefit they would accrue.”

FOR MORE INFORMATION on the “meals tax” referendum, click here. A town hall meeting on the referendum is scheduled for Wednesday, Sept. 28 at 7:30 p.m. in the Franconia Government Center, located at 6121 Franconia Road in Franconia.