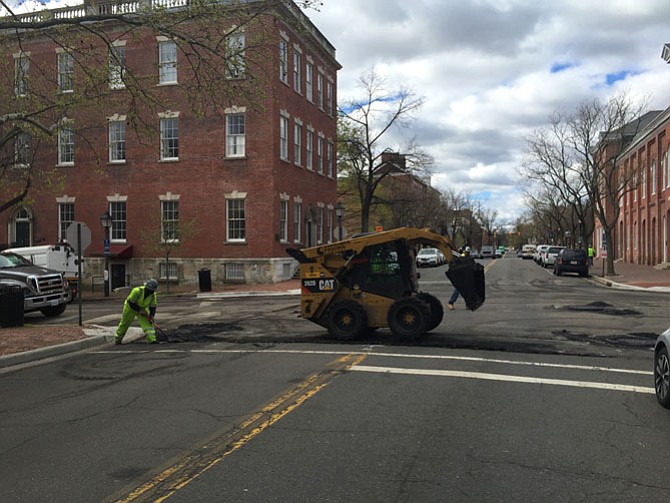 Throughout April, construction work on two Old Town streets could cause traffic trouble, but will leave the city with newly paved and enhanced roadways.

“Work started April 3,” said Carrie Sanders, deputy director of transportation. “It involves resurfacing of Cameron Street from Union Street to Buchanan Street and Prince Street from Daingerfield Road to South Washington Street. Those streets were on our pavement condition index. They were streets that needed resurfacing. We’re pleased that this is taking place and looking to complete the work as soon as possible.”

Like every resurfacing project, Sanders said the repaving work will cause disruptions. Construction will occur between 7 a.m. and 5 p.m. Traffic on the streets will be one lane only in areas where road work is ongoing. Work is expected to last up to eight weeks.

Before repaving, a number of safety improvements were added to intersections along Prince Street and Cameron Street. Six pedestrian countdown signals were added and several high-visibility crosswalks were put into place. Curb ramps were also added in some places to make the sidewalks complieant with the Americans with Disability Act.

According to Jeffrey DuVal, deputy director of operations, the estimated cost for resurfacing Cameron Street is $325,000 and $200,000 for Prince Street.