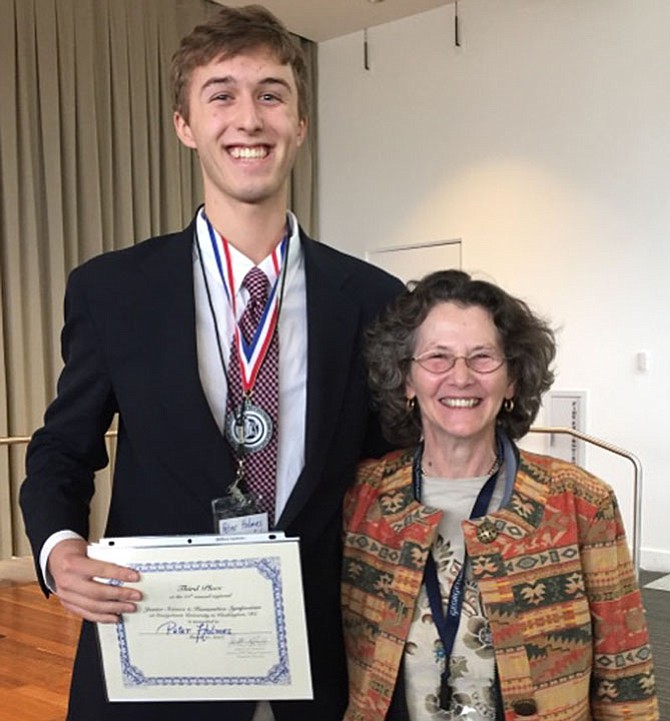 Senior Peter Holmes, a student in The Potomac School’s Science and Engineering Research Center (SERC) program, was awarded third-place honors at the regional Junior Science and Humanities Symposium (JSHS), held at Georgetown University in March. He received a scholarship and the opportunity to present his research, which focuses on a new method for producing ethanol as a biofuel, at the national JSHS in San Diego in April.

This is not the first time Peter has been recognized for this research. In January, he was named one of 300 Regeneron Scholars nationwide, as part of the Regeneron Science Talent Search, a prestigious pre-college competition that also awards scholarships.

Peter began working on his project as a junior. Having read about using algae to make ethanol, he said, “I tried to think outside the box about a new way that could be more productive and more efficient. That would be to have a single organism, or at least one system, that can both ferment and photosynthesize at the same time, making the whole process more effective.” Peter’s research advisor, Dr. Isabelle Cohen, said, “His scientific approach was one of the soundest I have witnessed in my many years of research and teaching.”

Cohen’s support prompted Peter to nominate her for the regional JSHS’s 2017 Teacher Award, which she received at the symposium. In his nomination, Peter wrote,

“I would characterize Dr. Cohen as the most intelligent, hard-working, and considerate person I know. Within her role as an advisor in the SERC program, Dr. Cohen oversees approximately 10 students a year in their independently crafted research projects.

…Dr. Cohen does much more than merely monitor; she becomes a trusted confidant throughout the whole process. …Without Dr. Cohen constantly pushing me to my greatest potential, I would not be where I am scientifically, nor appreciate the field nearly as much.”

Cohen teaches science in Potomac’s Upper School; she has been a member of the school’s faculty since 1997.