Community Gardens Are for Learning, Sweating and Reaping
Votes

Community Gardens Are for Learning, Sweating and Reaping 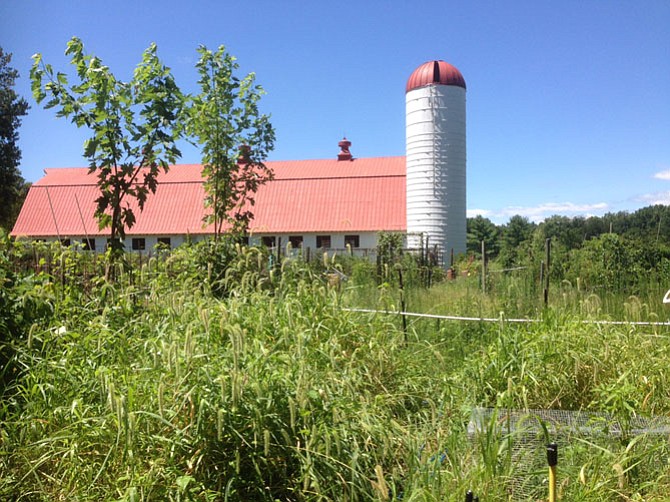 From the community garden at Grist Mill Park in the Mount Vernon area, the barn creates a farming atmosphere. Photo by Mike Salmon.

It looked easy when I leaned over the fence of a local community garden last year, mentally

Under the weeds, there were raised beds.

planning my own garden with several types of tomatoes, corn, beans and a couple of cucumber vines overwhelming the fence, weighted down with “cukes,” that would soon be in my salad. The unseen battle with weeds, bugs, a family of groundhogs and other furry creatures that munch plants down to the nub are part of the deal too, but didn’t dampen the spirit of my community garden. My first year this year will be a learning experience for next year’s garden, and years after that.

The Fairfax County community gardens are available through the park service for $125 a year. On the county website, I read the long list of rules for this project, and then found a plot that is relatively close to my house and got on the waiting list for one to be available. I was finally matched up with a 20x30 foot plot in the Grist Mill Park near Mount Vernon that would soon be my home

In April, the sprouts soaked up the spring sunshine before being transplanted to the garden in May.

away from home for the duration of the summer. In January, the plot was nothing but weeds and grass that was about 3 feet tall. After hours of hacking away, I discovered that there were six beds underneath that would be perfect for my plan. I read books, watched videos on YouTube, talked with other gardeners and came up with a loose plan that wouldn’t cost me too much.

March came around, and I researched the planting process that began with soaking seeds in wet paper towels, putting them in a pitch black closet for a few weeks, then to empty egg cartons and biodegradable pots, and then to the garden. May 1 is the preferred date for the freeze line, and off I went with my shovel and seedlings. Disappointment set in later in May when I discovered my corn stalks nibbled off to the dirt, and the same with my zucchini, sunflowers and 20 tomatoes that were still green. Chatter around the garden pointed the blame at the family of groundhogs that lived in the barn. So out came the chicken wire and soon every plant left had a cage over it. 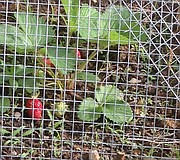 To keep out the wildlife, particularly a pesky ground hog that hangs out here, wire cages were built around the strawberries in June.

During the summer, I watched the weather, the holes in the fence, and the birds that were tough to defend against. The strawberries were the first to get picked for us to eat, followed by a few blueberries, and then tomatoes. The peppers, which I had grown from seed, along with the cucumbers, didn’t come until later in August, but were good to eat as well. The two beds that went without plants became a mass of weeds in a matter of weeks, and it was soon discovered that a layer of newspaper with mulch on top was a good way to fight the weeds, although some in the garden did use weed killer, a practice frowned on by the die hard gardeners.

This fall, when the tomatoes are dried and shriveled, and the weeds have died down, next year’s plan will come together and the work will start all over again. I can hardly wait.

To get your own garden, go to the Fairfax County website, (www.fairfaxcounty.gov/parks/greenspring/plots.htm), find a location near your residence and get on the waiting list. Similar to the whole gardening experience, this takes patience as well, and then a certain level of commitment when taking over a plot.

Early on in this year's garden experience, much activity, weeding and speculating took on the persona of a bumble flying around from plant to plant, so I captured the essence of the bee on a video, click here to see it.