Next: State Final for Westfield Bulldogs 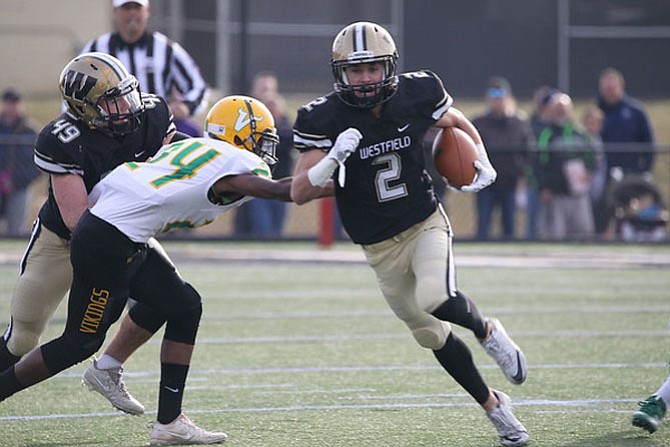 Taylor Morin #2 explodes by a Woodbridge defender on one of his 4 receptions. Will Palenscar

Westfield took an early 6-0 lead with 7:42 to play in the 1st quarter when QB

Matt Cirillo #88 leaps over one of his lineman

Noah Kim hit Taylor Morin on a 35 yard pass for a TD.

In the 2nd quarter, Woodbridge’s Antevious Jackson connected with Andrew Hardin for a 73 yard TD.

With 6:19 left to play in the 3rd quarter, Eugene Asante scored the first of his two rushing TD’s, to give the Bulldogs a 12-7 advantage.

Asante scored his second TD when he leaped over the goal line and gave Westfield a 18-7 lead with :56 to play in the game essentially putting the game away.

For the game Asante carried the ball 23 times for 140 yards and two touchdowns. Noah Kim completed 7 of his 12 passes for 132 yards and a TD to Taylor Morin. Morin would catch 3 passes for 96 yards and a TD. Morin also intercepted Woodbridge QB Antevious Jackson. Defensively Westfield was led by Nolan Cockrill, Saadiq Hinton and Taylor Morin.