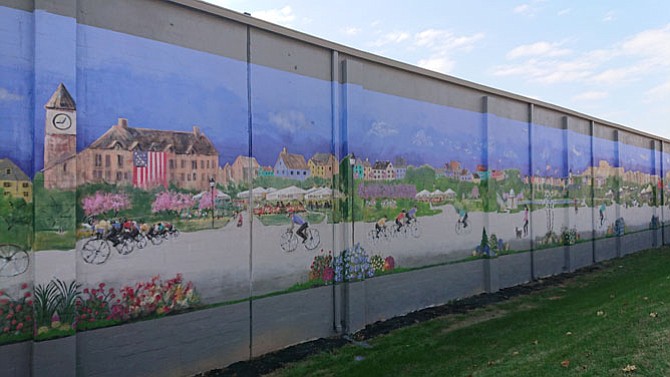 The Mural at Greenhill Properties, located on the Edsall Road side of the building at 611 S. Pickett St., was officially unveiled Nov. 30 by city officials and local artists Cindy Wallace and Len Garon. Called “Time Travel,” the mural is two stories high and 300 feet long and depicts the local history of the area.

Alexandria — If a picture paints a thousand words, then a mural the length of a football field can tell the story of the area’s history as evidenced in “Time Travel,” which was formally unveiled Nov. 30 in the West End of Alexandria.

Local artists Len Garon and Cindy Wallace were commissioned earlier in the year to paint the mural on the Edsall Road side of a warehouse located at 611. S. Pickett St. Measuring two stories tall and 300

feet long, the mural depicts the area’s history from left to right.

“This is a celebration of the renaissance of the West End of Alexandria,” said Wallace as she added her signature to the mural. “We began with American Indians then moved on to Fort Ward and the Civil War and ended with today’s modern times.”

Officially called The Mural at Greenhill Properties, the artists were commissioned by Greenhill developers to help beautify the city’s West End. Greenhill owns the majority of property bordered by Edsall Road, Van Dorn Street and S. Pickett Street, including the Giant-anchored Van Dorn Station. The company has submitted concept plans to the city for Pickett Place, a mixed-use development featuring more than 3 million square feet of residential, retail, hotel and office space.

“We are excited about this project,” said Greenhill Principal Richard Greenberg. “The mural is a way to

“This is a celebration of the renaissance of the West End of Alexandria.”

bring some color and vibrancy to the area as we continue to work with the city on our long range plans for the West End.”

In attendance at the dedication of the mural were art students from Samuel Tucker Elementary School.

“This is a great opportunity to show the students how our community celebrates art,” said teacher Sean Murphy, who organized the field trip. “Hopefully it will inspire them in their own work.”