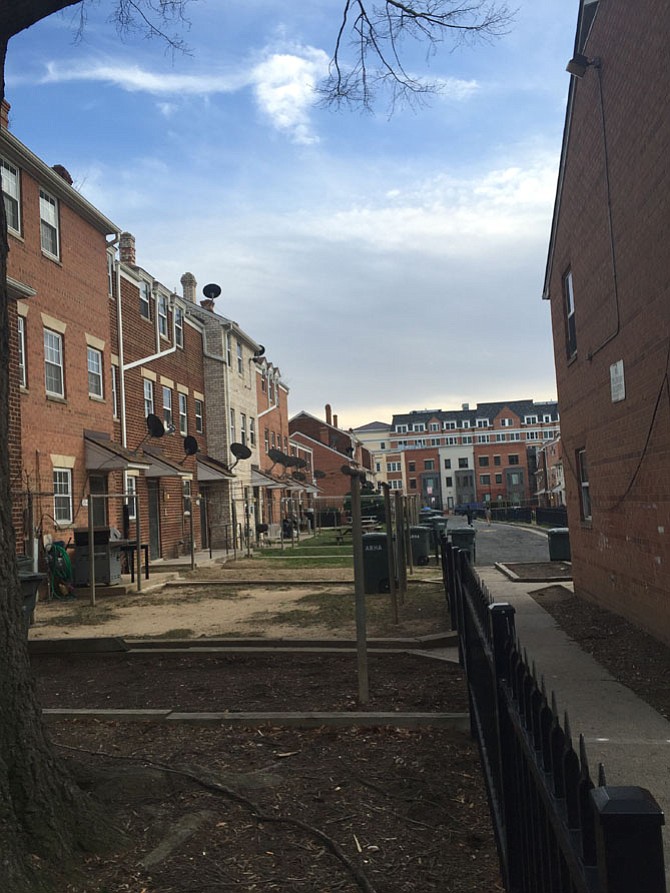 Alexandria — When the sentence was pronounced, Rashad Lonzell “Snap” Adkins had nothing left to lose. For second degree murder of Shakkan Elliot-Tibbs in 2015 and a related weapons charge, the jury gave him the maximum penalty of 43 years in prison with no chance of parole.

His family wailed while friends shouted angrily at the judge and the jury. As deputies were struggling to contain them, Adkins, who had remained stoic throughout the trial, made a break for the gallery. He shoved the deputies out of his way and nearly broke through into the audience. Broken blue wooden beams knocked out of the divider between the gallery and the court marked his progress before four deputies ultimately pushed him to the ground and were able to restrain him.

The courtroom was cleared and Adkins’ family was not allowed to return as the jury finished the sentencing.

The first murder in Rashad Adkins’ life happened months before his birth. In 1994, a car slowed down near Lonzell Adkins as he walked through Del Ray. Court records from the case say the car’s occupants called over to Lonzell Adkins, and, when he came close, Timothy Matthews got out of the car and shot him at point blank range with a silenced pistol.

Danielle Adkins, Lonzell Adkins’ younger sister, was a child when he was murdered. She recalled that Lonzell Adkins was supposed to pick her up from school that day but never showed up. When she started to walk home, she saw a group of people stopped in the street. In the middle of the crowd was her brother, Lonzell, dead in the street. A neighbor who knew her scooped her up and carried her away, but it was Danielle Adkins who had to break the story of her brother’s death to her parents.

Two years later, Johnson vanished on a trip to the store. A week later, her legs were found in Fauquier County. The rest of her body was never found. Constance Adkins said it wasn’t until around 2009 that police were finally able to confirm that the legs belonged to Rashad Adkin’s mother.

Danielle Adkins said the murder of Rashad Adkins’ father scarred him. She described him as highly obsessive compulsive and superstitious. When he turned 16, the age his father had been when he was murdered, she said he became increasingly paranoid.

“Lonzell’s death had an effect on all of us,” said Danielle Adkins. “Rashad was scared and careful. Same way his dad passed, he was afraid he would too.”

Constance Adkins said the death of Rashad Adkins’ parents left him very protective of his family.

“Could you imagine coming into the world knowing someone took the life of your father and then brutally took the life of your mother?” said Constance Adkins. “I’ve seen it exhibited in his life and behavior. His sense of security totally shaken by the [idea that] the things that happened to his father would happen to him … Rashad always had fears. Even as a child, he was always certain to make sure the door was locked.”

In 2014, Rashad Adkins moved into the Andrew Adkins housing projects to take care of his cousin, Brandon “Bullet” Hughes. Dorothy Hughes, Brandon’s mother, said her son was developmentally impaired and people in the neighborhood regularly took advantage of him.

“I asked Rashad to move in and take care of Brandon,” said Dorothy Hughes. “Things changed. Doors stayed locked. Brandon got back on track [with his medicine]. The house was cleaned up. It was a big difference.”

But the harassment by the local teens didn’t stop. On July 2, Dorothy Hughes gave her son $20 to go buy cigarettes from the store. When the money was taken by local kids, Brandon Hughes and the teens got into a confrontation, at which point Shakkan Elliot-Tibbs stepped in.

When Shakkan Elliot-Tibbs was a child, his father James Elliot said he would take a massive lunch to school, but wouldn’t eat it because he divided most of it among other children who didn’t have much to eat. James Elliot said Shakkan’s mother would tell him not to, but that he would anyway. This continued as he grew up. Linda Tibbs, Shakkan’s mother, said Shakkan didn’t ever allowed anyone around him to go hungry.

“He always extended himself,” said Tibbs. “He didn’t allow any of his friends to be homeless or have nowhere to go. His friends who had nowhere to go had Shakkan.”

Even for people he didn’t know, Tibbs said Shakkan Elliot-Tibbs would try to step in and help. She remembered picking him up somewhere and him insisting on giving a stranger waiting there a ride.

Elliot-Tibbs didn’t finish high school, but later went back and finished his GED. James Elliot said it was like something clicked for his son one day, and he started working to get his life on track. He enrolled in Job Corps to train as a mechanic and had plans to travel to Utah to take advance courses.

“‘You get an opportunity to get away from this place, you take that oppurtunity,’” James Elliot remembered telling his son. “I was so proud to see he had become a man of responsibility. What I had told him sunk in. He had no intentions of coming back. If Job Corps hadn’t closed that weekend, he wouldn’t have been here.”

But Shakkan Elliot-Tibbs did come back that weekend. He was staying with his family in Woodbridge but had gone up to Alexandria to visit family. Elliot-Tibbs was on his way back to the Braddock Metro to meet his mother at Springfield and head home when local teens started getting in an altercation with Brandon Hughes. Elliot-Tibbs stepped in and told Hughes to leave the teens alone. Brandon Hughes left to get his cousin, Rashad Adkins.

Though neither of them knew it at the time, Rashad Adkins and Elliot-Tibbs are third cousins; their great grandmothers were sisters. But by all accounts, the two had never met before their fatal confrontation on July 2. When Rashad Adkins approached Elliot-Tibbs, witnesses say the two exchanged heated words before Elliot-Tibbs shoved Rashad Adkins. Several witnesses saw the shove, the physical start of the conflict, which was enough for the jury to charge Rashad Adkins with second degree murder rather than first degree, meaning the act had happened in the heat of the moment and was not premeditated. What happened next is unclear. Witnesses for the defense, both of whom were friends or associated with Rashad Adkins, said Elliot-Tibbs punched Rashad Adkins or at least started charging at him. What all agreed was after this, Rashad pulled out a gun and killed Elliot-Tibbs. He fired four shots from a semi-automatic handgun, two fatally striking Elliot-Tibbs. After the shooting, Elliot-Tibbs stumbled back against the fence and bled out while Rashad Adkins jogged away. Elliot-Tibbs was rushed to the hospital where he died.

“Now I’m all alone,” said Tibbs. “Everything is gone. Everything has been taken from me. I still don’t know how to deal with that … I will always love my son.”

When Tibbs would lift her son up as a child, he would tell her, “Momma, I love you to infinity.” Tibbs said she would joke that she didn’t know how to express how much she loved him when he went straight to infinity. Finally, she would respond: “I love you with all of my heart.”