A hearth is in demand for cold weather. 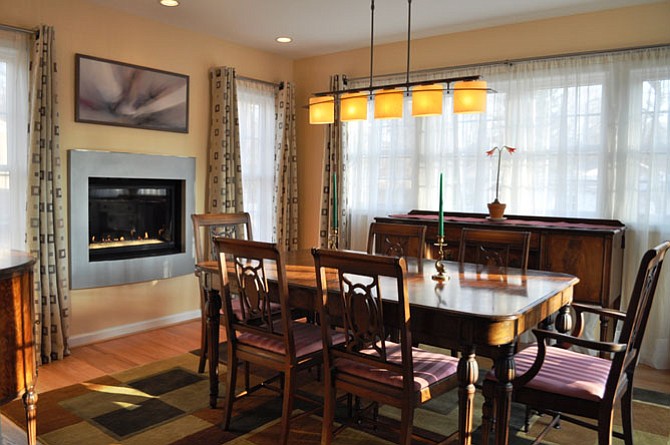 Burke homeowners Dennis Perzanowski and Jack Ellison were looking for a mix of old and new styles in a porch conversion that is now their new dining room. A 42” x 38” gas insert with brushed steel frame suits the wall space between two floor-to-ceiling windows. Photo contributed 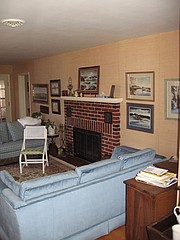 The original brick-facing fireplace was drafty and cold. 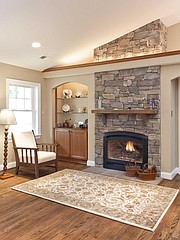 The stacked Ledgestone fireplace designed by Foster Remodeling provides an ascending vertical accent in a remade interior that includes a vaulted ceiling. The gas-fueled flame can be regulated by remote control.

The McLean makeover features an 11-foot cathedral ceiling dominated by a window wall, and a post-modern hearth as the central interior focal point.

Grems (after) — The Grems decided on a formal and traditional look for the fireplace in the family room. The half-brick floor-to-ceiling backwall was replaced by symmetrical built-ins, crown molding and an elevated hearth with a marble surround and an Edwardian-style mantle.

“Fireplaces have never fallen out of favor,” said David Foster, president of Foster Remodeling Solutions. “We may be seeing a preference for gas over a traditional wood-burner, but the hearth itself is hugely popular — with homeowners continually seeking distinctions in style, building materials and, even, where it will be located.”

“A fireplace offers aesthetic and functional benefits at one price,” he said, “so it’s an attractive option.”

Fireplace-desire can also be a spur to creative thinking that stimulates a more engaging and original remodeling project.

Case in point, the new formal dining room created for Burke homeowners Dennis Perzanowski and Jack Ellison. The goal: convert a three season-room into a year-around dining room complete with a gas-fueled hearth on one elevation.

“We were looking for a mix of old and new styles,” said Perzanowski. “We wanted to feature a traditional dining room set with sideboards, but there are modern touches such an industrial-style chandelier.”

In this context, a gas fireplace with an brushed steel frame was a perfect offset. Mounted on the east wall elevation and with an oil painting just above, the stacked geometrical shapes lend balance and symmetry to an otherwise blank wall between two floor-to-ceiling windows.

Chris Arnold, a Foster partner who managed the project, knew there would be challenges in adding a hearth in a somewhat restricted available space, but with a little research found a 42” x 38”gas insert that perfectly suits the spot allocated for an eye-catching focal point.

“This is something of a formal dining room,” Arnold notes, “yet the fireplace design is so understated it's visually compatible the rest of the décor.”

Meanwhile, not far away, the interior design solution to a Vienna great room also depended on profiling an new hearth.

Ted and Wanda Rogers had asked had Foster to renovate the circa-1960’s ranch they had occupied for 30 years.

The remodeler added more than 1,000 square feet of additional living space. But the question that generated really serious discussion was how best to introduce a new hearth.

Wanda Rogers wanted to eliminate the original builder-grade brick-facing fireplace, which was situated in the middle of the house and too drafty and cold.

Ted Rogers agreed in principal, but was attracted to a gas-fueled fireplace alternative, which offers considerable heating efficiencies.

As all soon learned, the existing 8-ft ceiling to the Rogers home was too low to yield much design benefit. That’s when Foster proposed re-working the entire mid-house interior by opening sightlines out and up.

To implement changes that now called for connecting the new kitchen to a front-facing family room, the remodeler replaced an obstructive bearing wall with concealed structural supports.

The new hearth is designed for a gas-fueled insert equipped with blowers and remote control. Vents draw air in from the outside. The couple can adjust a thermostat for the desired temperature. This is a useful since, at full speed, the unit can generate 55,000 BTUs of heat — enough to keep the entire great room toasty and warm even during the dead of winter.

Foster’s architect proposed a wood-trimmed ledge above the fireplace, a simple motif that draws the eye upwards to the accent-lighted vaulted ceiling.

As a housewarming gesture, Foster fashioned a rustic mantle from the rough-sawn oak previously deployed in the rafters of the original structure. It’s a little keepsake of the old place.

Though higher interior ceilings, theoretically, make a room harder to heat, the remodeler re-insulated the ceiling and installed an eco-slate roofing, dramatically improving the thermal efficiency of the entire residence.

The new fireplace is flanked by arches: a recess for shelving and cabinetry on the left; a sympathetically curvilinear entry to the new master suite on the right.

“The effect in all directions is exciting,” Wanda Rogers said. “Looking in from the kitchen, the room opens out and up; it feels really warm.”

The new vaulted wall expanse also doubles as display space for her private art collection, which is now illuminated by tract lights.

In nearby McLean, a Foster client was looking for a floorplan re-configuration that would include a front-facing family-gathering niche — with a window wall and a fireplace.

“We all saw the aesthetic opportunity,” Foster said. “There would be larger windows on all sides. But also a new front-facing family room — with an 11' cathedral ceiling dominated by an extensive window wall, and an appropriately post-modern hearth as the central interior focal point.”

The window wall would help to contextualize a more symmetrical front elevation — one defined by a processional entrance way with double French glass doors and sidelights.

Taken as a whole, however, the floor plan is functionally a “great room” formed by clever variances in room width and ceiling height differentiated as clearly identified “use” spaces.

“The slightly narrower width confers a degree of intimacy on the family room that suits its purpose,” Foster observes. “The hearth, in particular, really defines this.”

A more congenial spot for holiday entertaining is hard to imagine.

FROM BRICK TO ELEVATED HEARTH

Ed and Kelly Grems of Vienna have worked with Foster on a number of projects over a decade, but held off on upgrading the family room because the family's design process was gestating slowly.

“We're particular; we let the look come to us piece by piece,” Kelly Grems said.

One notable piece, was deciding on a formal and traditional look for the fireplace in the family room. In the end, FRS designers created interior elevations that bear no resemblance to the excess of brick that came with the original circa-1990s house.

The earlier half-brick floor-to-ceiling backwall was replaced by symmetrical built-ins, crown molding and an elevated hearth with a marble surround and an Edwardian-style mantle.

“It's an entirely different mood from the sun room,” Grems said, “and perfectly satisfies another dimension of our lifestyle.”