Men said to be detained after leaving Mount Vernon shelter. 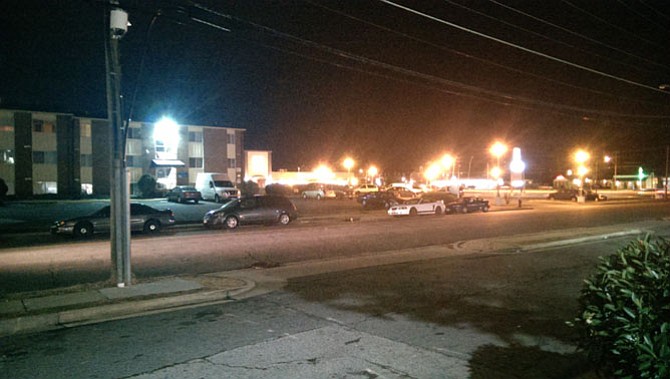 According to an ICE official, two individuals were arrested Wednesday, Feb. 8 near the shopping center on Russell Road in Alexandria, as part of routine enforcement activity. Photo by Tim Peterson.

From left, immigration attorney Nicholas Marritz speaks with Oscar Ramirez, Marvin Roach and Thermon Brewster about their experience being questioned, and in Ramirez’ case temporarily detained, by ICE officers on Wednesday, Feb. 8 in Alexandria.

Around 6:45 a.m. Wednesday, Feb. 8, Oscar Ramirez, Marvin Roach, Thermon Brewster and other men emerged from the hypothermia shelter at Rising Hope United Methodist Mission Church on Russell Road in the Mount Vernon Area of Alexandria. Many walked next door to 7-Eleven for cold beers, they said, to begin planning the day out, as is their routine.

When they began crossing the parking lot towards the Aldi grocery store, opposite Rising Hope, a flurry of at least half a dozen unmarked police cars descended on the group, Ramirez, Roach and Brewster said.

“Like it was a setup or something,” said Brewster.

Officers with uniforms reading “POLICE” and “ICE” (U.S. Immigration and Customs Enforcement) immediately told the men to stop where they were. The officers didn’t identify themselves other than that, the three men said, and weren’t displaying weapons.

Roach and Brewster, both Caucasian, were shown pictures of men on a computer, they said, and asked by officers if they had seen any of them. Neither were asked for any kind of identification or nationality information.

Ramirez, however, was surrounded by officers, along with several other Latino men and told to stand against a wall while keeping their hands visible. Ramirez is a native of El Salvador but said he moved to the United States in 1986, when he was just a boy.

The Latino men were also asked if they had seen the men on the computer screen, said Ramirez, who attempted to help translate for some of the other men. But, after being singled out, they were also questioned about their immigration status.

Ramirez said he wasn’t asked for photo identification, just his date of birth, Social Security number and date when he entered the country. He admitted he isn’t a U.S. citizen, but holds a green card and was granted a suspension of deportation by U.S. Citizenship and Immigration Services because he had been a resident for so long and has three daughters all born in America.

Officers told Ramirez he was OK, and was free to go. Other men, he said, were shackled and shoved into a large white van.

When the van pulled up, all three men said, there were already men inside, some of whom were crying. A number of men from the shelter were put in the van, which drove away. 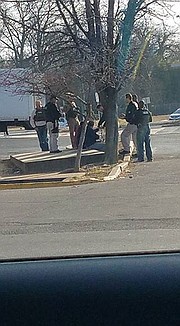 A resident’s cell phone photo captured ICE agents engaging with men near the 7-Eleven on Russell Road in Alexandria on Wednesday, Feb. 8.

Ramirez said he knows some of them have minor criminal records, and one was facing charges for a robbery in Washington, D.C. But he also said he had never seen an incident with law enforcement like this in his life.

Roach and Brewster, longtime residents of the area, echoed Ramirez. “I’ve been here all my life,” Roach said, “I’ve never seen anything like this. It happened really fast, it was like a kidnapping.”

SINCE THAT WEDNESDAY morning, the three said they’ve seen similar unmarked police cars in the area of the church off and on.

According to an ICE official, just two individuals were arrested Wednesday in that area, as part of routine activity.

“Every day, as part of routine targeted enforcement operations, U.S. Immigration and Customs Enforcement (ICE) arrests criminal aliens and other individuals who are in violation of our nation’s immigration laws,” the official said in a statement.

The official could not confirm other aspects of the men’s story, and insisted ICE does not detain people in vans, as the men described.

Though the statement is at odds with the men’s account, Ramirez said there is genuine fear in the Latino community. Businesses including the laundromat usually frequented by Latinos in that shopping center have been barren in the last week.

“People are staying in, they’re scared,” he said.

Kelly went on to explain this is nothing out of the ordinary for ICE. As well, he said, “President Trump has been clear in affirming the critical mission of DHS in protecting the nation and directed our department to focus on removing illegal aliens who have violated our immigration laws, with a specific focus on those who pose a threat to public safety, have been charged with criminal offenses, have committed immigration violations or have been deported and re-entered the country illegally.”

Routine or not, the latest activities of ICE have clearly raised public sensitivity and fear of deportation.

At a Lee District town meeting on Feb. 11, state Sen. Scott Surovell (D-36) said there was like a whole segment of the audience missing due to perception of events like what allegedly took place on Russell Road as raids.

“We have to do more to make people feel welcome,” Surovell said. “I’m going to do everything I can to support them.”

A woman in the audience said students in her English for Speakers of Other Languages class are coming to school scared, some that parents may not be there to pick them up at the end of the day.

“There is genuine fear,” said state Sen. George Barker (D-39), “that little kids should not have. A political decision may sound great until you see the faces of the individuals affected.”

Around 6:45 a.m. Wednesday, Feb. 8, Oscar Ramirez, Marvin Roach, Thermon Brewster and other men emerged from the hypothermia shelter at Rising Hope United Methodist Mission Church on Russell Road in the Mount Vernon Area of Alexandria. When they began traversing the parking lot towards the Aldi grocery store, opposite the church, a flurry of at least half a dozen unmarked police cars descended on the group, the men said.

“At the core of this, it’s about a diverse community wanting to make sure we honor and respect that by not going after people that may be different, look different from us.”

At the same time, Storck said, “we recognize, we don’t want people that are criminals to be out in our community. There’s a balance we always want. I don’t think our President has that balance in what he does.”

Storck said he’s been in touch with the Mount Vernon District police station about citizens’ concerns over ICE activity. He said he was told they “usually don’t know what’s going on,” with ICE or other federal law enforcement operations.

FCPD spokesperson Master Police Officer Don Gotthardt said in an email county police had no role in any “federal raids,” and, “and in fact, have not been made aware of any in Fairfax County.”

TRAFFIC WAS SLOWED significantly Saturday afternoon Feb. 11 on I-66 around Centreville where a number of both FCPD and ICE vehicles had lights flashing and a large van with about a dozen Latino male passengers were pulled over.

In this case, Gotthardt said an FCPD officer made a routine stop for a traffic violation and then, after seeking advice from a patrol supervisor, contacted ICE to assist with interviews.

Gotthardt said he did not know the nature of the conversations, though both he and an ICE official confirmed that none of the men were arrested and were allowed to re-load the van and resume driving.

When asked to give further detail on the FCPD protocol for collaborating with ICE, Gotthardt did not respond in time for print.

Board of Supervisors Chairman Sharon Bulova said she hasn’t been made aware of any more activity by ICE than what other citizens are seeing themselves or on the news.

But, as she said she has asserted numerous times, Fairfax County is a “Very diverse community — people have come from all over the globe. It’s important that we maintain a harmonious community.”

Bulova also said she’s watching carefully “to make sure all members of our communities are being treated fairly.”

After having listened to the story from Ramirez, Roach and Brewster, immigration lawyer Nicholas Marritz of the Legal Aid Justice Center in Falls Church doesn’t believe that was the case across from Rising Hope.

“Stopping a group of people without reasonable suspicion, seems to be on extremely questionable legal footing to me,” Marritz said. “You have the right not to be seized, based on the color of skin. It’s a violation of Constitutional rights.”

Marritz said the men’s narrative underscores the need for more people to understand and assert their rights.

“Everyone is protected by the Constitution,” he said. “You have the right to remain silent, to say ‘I’m not going to tell you about immigration status,’ to ask to talk to an attorney. No one should have to suffer an indignity like this.”

Storck said the stress and fear he’s heard from community members, especially among children, is “not what we want in Mount Vernon, in Fairfax County.”

“This is not the United States of America that I voted for, nor the kind of country in think the vast majority of people really want,” Storck continued. “We need solutions, not more fear. Solutions, by recognizing the millions of undocumented residents, and providing a path to be here legally, protecting their children in the meantime. Protecting our children, frankly.”

Storck said he planned to speak with senior FCPD leadership and find out more about their protocol for interacting with ICE.

The hypothermia shelter at Rising Hope is coordinated by New Hope Housing.