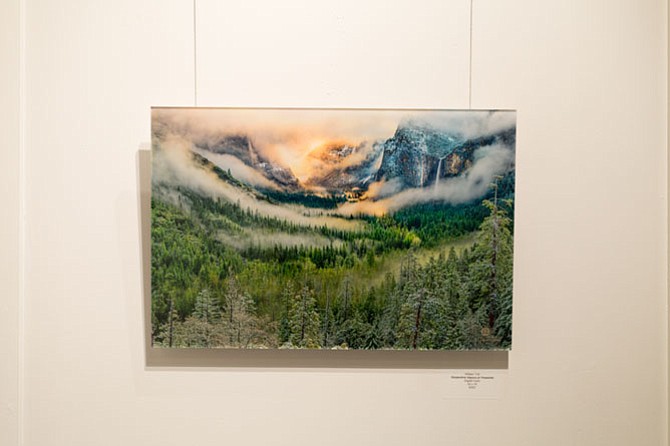 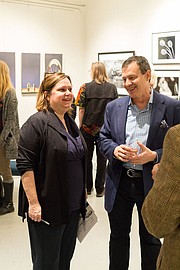 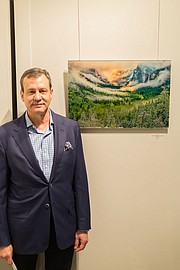 William Toti, who had never before entered a photo competition, stands beside his photo, “Serpentine Vapors at Yosemite,” selected as the 1st place winner in ArtSpace Herndon’s 8th Annual Photography Competition & Exhibit. The call for art drew 225 submitted photos from professional and amateur photographers across the DMV.

According to Exhibit Manager Anna Schoenfeld, the call for art drew 225 submissions from across Virginia, Maryland and the District of Columbia with 75 photographers vying for recognition and the $800 in cash prizes. While many photographers used striking colors, presented strong compositions or went for a reaction, technical competence dominated.

In her welcoming remarks to the audience, Signe Friedrichs, executive director of Arts Herndon, said, “These photographs show how a group of artists with a range of themes and skills can be brought together to exhibit work ranging from realistic black and white to colorful abstract images into one spectacular exhibit."

Carla Steckley, who judged the competition in 2015 and returned to judge this year’s competition, selected 37 photographs to be named finalists out of the 225 submitted images. Steckley explained there were so many excellent works; it took her two weeks to finalize her selections. "I kept coming back to them again and again, changing my mind,” Steckley said. “I re-evaluated until I reached my decision but only due to the deadline.” She added that she judged the images name-blind, meaning the photographers’ names were covered up or omitted.

In making her decisions, Steckley looked first for technical skills. "Exposure, composition, light," she said. "Sharpness where it needed to be sharp.” As she progressed through the images, Steckley looked for photographs that were unique; ones that asked more questions than they answered.

Before Steckley announced the winners of the competition, she cautioned her audience. "Just because you did not get an award, please remember this is my opinion,” she said. “I'm proud of you and your photographic abilities. I wanted to give more awards."

Judith Guenther received a merit award from Steckley who had high praise for Guenther’s black and white photograph, "In the Grid" shot inside a high domed modern structure with arched overhead beams and rays of slanted sunlight directed toward two interior human figures. Steckley said, "Color in geometric forms can be confusing. Black and white was appropriate for this picture. It works very well with the light and lines all directed toward the subjects."

Third place winner was "Protected" by Peter Foiles. As Steckley reviewed the image’s winning characteristics during her remarks to the audience, she said, "I've never seen more creative nudes. Beautifully done. The angle of woman’s glance. The black background, unobtrusive. And the lighting on the woman’s hair is important.” She added: “[The photograph] is so unique and not offensive." When Foiles approached the podium to receive his award, Steckley asked him about the creative process for his photo. Foiles said, "A lot of the credit goes to the models who came up with the idea."

Second place winner was the photograph, "Porch" by Joanne Rojcewicz. Steckley commented that the boy's expression in the image was perfect; if he'd been smiling it wouldn't have worked. Once again she referenced light leading the eye to subject matter, the young boy’s face.

Steckley shared with the audience that she had difficulty deciding between Yosemite and another of Toti's works that was also a finalist. Ultimately she chose Yosemite she said because photography is all about the light. The white serpentine mist crossing the mountains draws the eye back and forth across the photo leading the viewer to the sun and its ribbon of light.

In an interview, Toti explained that this was his first competition. "I thought I'd give it a shot," he said. "I’ve been afraid not to be accepted."

He added, “Art is very subjective. I go for bright, bold, vibrant colors and I build up a color palette."

Ruth Tatlock attended the reception and awards ceremony. She had spied what was to be the winning shot earlier in the evening. "I love this photograph," she said. "I've been there; the fog is beautiful." Tatlock remarked that the photo reminded her of the words of John Muir, a naturalist who wrote considerably about Yosemite and the works of Ansel Adams, known for his landscape photographs of Yosemite National Park.

Toti’s winning framed photo and those of the other finalists will be on exhibit and available for purchase opportunity at the Post Gallery, ArtSpace, 750 Center Street, Herndon, VA 20170 through March 11. The gallery is open Tuesday- Saturday, 11 a.m.-4 p.m. and closed Sunday-Monday.

For more information about ArtSpace Herndon, its classes, rentals, future calls for arts, and how to support the nonprofit organization either through volunteer service or donation to help defray the cost of exhibits and other programs, visit www.artspaceherndon.com.

MERIT, In the Grid by Judith Guenther