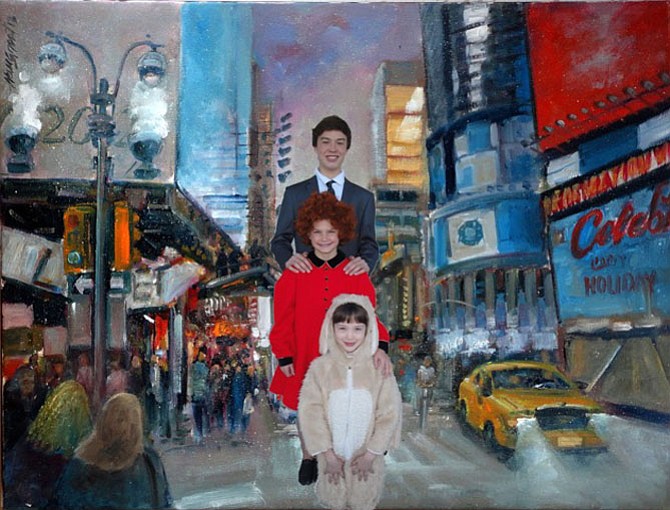 From top are Matthew Milam as Oliver Warbucks, Izzy Alexander as Annie (Hannah Goldberg, not pictured, is the double cast Annie), and Chase Herwig as “Sandy." Photo by Laurie Levy Issembert

Celebrating her 20th year in the business of “show business” — providing school age children an opportunity to perform in musical theatre productions — Bravo Executive Producer Laurie Levy Issembert has chosen to present two shows this season. Both productions have special meaning to her.

Thirty years ago, while working as the director of on-air promotion at WDCA-TV, Channel 20, she developed a working relationship with Charles Strouse, already a Broadway composer and the brother-in-law of WDCA-TV General Manager Milton Grant, a local Washington television personality. Grant had hosted a local dance show on Channel 5, similar to Dick Clark’s American Bandstand. In 1976, Charles Strouse was creating a promotional jingle campaign for WDCA-TV at the same time that he was previewing his show “Annie” at the National Theatre in its pre-Broadway tryout.

Laurie Levy Issembert sat with Strouse in the audio bay at the back of the National Theatre and gave him notes during a dress rehearsal of the show. She has since produced four different versions of the show: the full show at The Musical Theater Center in 2005, “Annie Warbucks,” the sequel in 2006, “Annie Kids,” a 30-minute version in 2014, and now “Annie Jr.,” a 60-minute version.

Her love of music and musical theatre is inherited from her mother, Clarice Leiner Levy, a composer, pianist and piano teacher in the Washington area since 1938 who recently died at the age of 98. Originally from New York, Clarice Leiner Levy was once a guest contestant on an NBC musical show called “Songs for Sale,” hosted by Steve Allen. Allen’s show format was similar to current musical competition shows in that songs were submitted and if selected were performed by a known singer and then judged by a panel of Broadway professionals. Clarice Leiner Levy’s song – “The You That Used to Be” was sung by “velvet fog crooner “ Mel Torme and critiqued by Broadway legends Adolph Green and Betty Comden.

“Legally Blonde Jr.” also celebrates female empowerment and honors the American Broadway tradition of taking on social issues and focusing an entertaining spotlight on them. The location of Harvard University Law School has a special place in Laurie Levy Issembert’s heart as her dad, Arnold Levy, graduated from Harvard, second in his class and on the Law Review Editorial Board. Her dad wanted her to follow in his footsteps but she chose the world of theatre at Northwestern University rather than the ivy-covered walls of academia.

Izzy Alexander who plays Annie said, "Whenever I come to rehearsal, just being with the cast makes me full of joy. I have learned about the life of an orphan during the Great Depression. It was hard for the orphans. And it makes me glad for my life with my family."

Eight-year-old Chase Herwig, who plays the part of Sandy, the dog in “Annie Jr.,” said, “I have learned stage directions and how to sing high notes. And since I play Sandy, a dog, I've learned how to act without saying words."

Hannah Goldberg, who is double-cast as Annie explains that what she learned was "The sun will come out tomorrow — and it's always good to think positive."