Twelve Years from Cub Scout to the Top 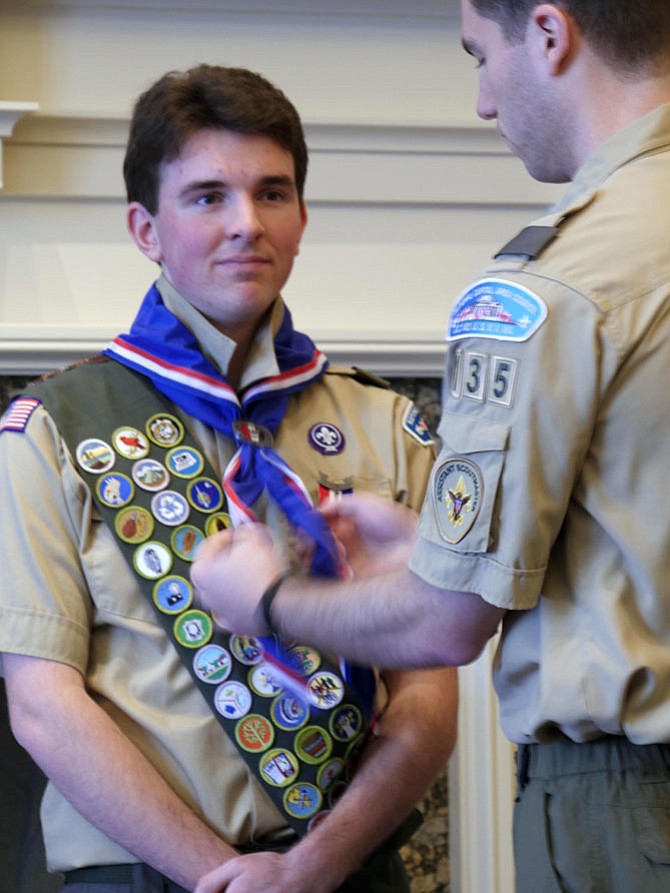 Thomas Pollack receives his Eagle Neckerchief in a ceremony Saturday Jan. 7 at the Army-Navy Country Club. He began Scouting at 6 years old. Photo by Shirley Ruhe. 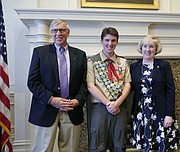 Thomas Pollack stands with his parents at his Eagle Scout Court of Honor after presenting each of them with a pin for their support and assistance on his trail to Eagle Scout. His grandfather Bailey reflected, “You don’t get here alone.” 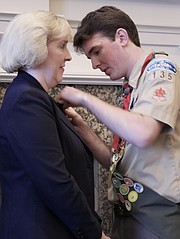 Thomas Pollack presents his mother, Susan, with a pin as a thank you for “all of the hours along the way and keeping my schedule and all of that organization.” Pollack’s father, Mike, also received a pin for “all that camping and those construction projects.”

Thomas Pollack reached the end of a long journey on Saturday, Jan. 7 when he received his Eagle neckerchief in his Eagle Scout Court of Honor ceremony at the Army-Navy Country Club. Pollack said in his Reflections of an Eagle Scout that he couldn’t quite grasp it yet.

He began the journey at 6 years old when he became a Tiger in Cub Scout Pack 614. Now at 17 years old with his sash full of badges, he was receiving the highest honor a Scout can earn. His former Cub Scoutmaster Linda Hill opened the program with remarks on those early days while his later Boy Scout leaders in Troop 135 shared their thoughts on his trail to become an Eagle. While there were numerous humorous memories of camping trips, getting stuck in knee-high mud and other challenges along the way, most of the comments were focused on Pollack’s leadership and accomplishments: “He is that quiet spark that has the ability to deal with challenges and although some have been difficult, there isn’t one he hasn’t met.”

As part of his road to Eagle Scout, Pollack participated in three high-adventure hikes including one to the White Mountains. “He said to Scoutmaster Jim Bower, “You made it look easy … but it wasn’t.”

An Eagle Scout is required to have earned 21 merit badges with 13 Eagle-related. Pollack earned 39 merit badges, served as senior patrol leader, troop instructor, guide, historian, first aid instructor. In May of 2016 for his required Eagle Scout Leadership Service Project he organized and coordinated a group of Scouts, parents, leaders and friends to design and build a Trailhead Information Kiosk for the Four Mile Run Wetlands Restoration Project.

Pollack’s friend Will Gately, who had been with him since the beginning, served as the master of ceremonies for the Eagle Scout Court of Honor Program. Gately is scheduled to receive his Eagle Neckerchief in several weeks. Pollack’s grandfather Bailey Walsh gave the invocation and benediction. Pollack’s older brother, Michael, had been scheduled to present the Eagle Neckerchief but was snowed in last minute at Hampton Roads. And parents Susan and Mike Pollack received pins from their son for their help along the way emphasizing the importance of family and friends. “It’s a tough road to get to this place,” his grandfather said. “You don’t get here alone.”

Pollack lives in Alexandria and attends Gonzaga College High School where he is an honors student and on the Varsity Tennis Team. In addition he has played baseball in the Alexandria Little League for the past 12 years. To round it out, he volunteers weekly for the Father McKenna Center and is involved in social justice advocacy.