The exploits of Col John Mosby are being recounted in a 3-week course.

Fairfax — Many Northern Virginians probably think of guerilla fighting as a relatively modern phenomenon, exemplified by the fighting units of the Viet Cong in Vietnam and Fidel Castro in the Sierra Maestra Mountains as he sought to overthrow the Batista regime in Cuba.

The exploits of Col Mosby are being recounted by CIA veteran Patrick Diehl in a 3-week course beginning Jan. 25 at the Osher Lifelong Learning Institute (OLLI) at George Mason University.

From 1863-65, Mosby led a small (usually 150-200 men) but daring group of cavalry that operated behind Union lines in Fairfax, Prince William, Loudoun, and Fauquier counties, as well as areas around the Shenandoah Valley. Loudoun and Fauquier counties, in fact, known as “Mosby’s Confederacy” because it was so risky for Union soldiers to travel there.

Mosby’s “Rangers” struck isolated Union detachments without warning, and usually captured most of the men and their horses. Then the Rangers would seemingly vanish into the countryside, not to be found by pursuing Union forces. The secret to this successful disappearing act was Mosby’s recognition of guerrilla warfare principles, a perception almost unique in the Civil War era. The most important principle being that sympathetic civilians in Loudoun and Fauquier counties housed and fed Mosby’s men on their farmsteads. Thus the Rangers became virtually indistinguishable from the locals, and the Union soldiers never really knew whom to take into custody. Other Mosby innovations covered in the course include: (1) Relying on revolvers in combat instead of the traditional cavalry saber; and (2) Setting up a network of long range scouting parties along the Shenandoah River and the Potomac River in Fairfax, providing Mosby with early warning of Union troop movements. 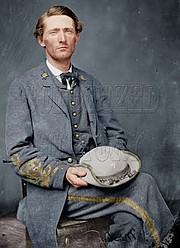 The course also highlights some of Mosby’s most celebrated attacks. These include the nighttime capture of a Union general and other officers at Fairfax Court House in 1863. Then there was the famous Wagon Train raid at Berryville, Virginia in 1864 when the Rangers captured and destroyed over 200 wagons supplying the divisions of Union General Philip Sheridan. Or how about the Great Train Robbery outside of Harpers Ferry, West Virginia, when Mosby captured Sheridan’s payroll of $176,000.

Mosby’s activities were a serious thorn in the side of the Union authorities trying to control the Northern Virginia counties. At one point there were 10 Union regiments pursuing him, and there were approximately 60 military engagements from 1863-64. The Rangers suffered a total of 85 killed in action and 200 prisoners at war’s end. By contrast, historians generally estimate Union losses at around 2900 killed, wounded and captured and a total of 3500 horses and mules stolen.

OLLI provides first-rate educational, social, and cultural opportunities for citizens of Northern Virginia. More information about its program and events can be found at olli.gmu.edu