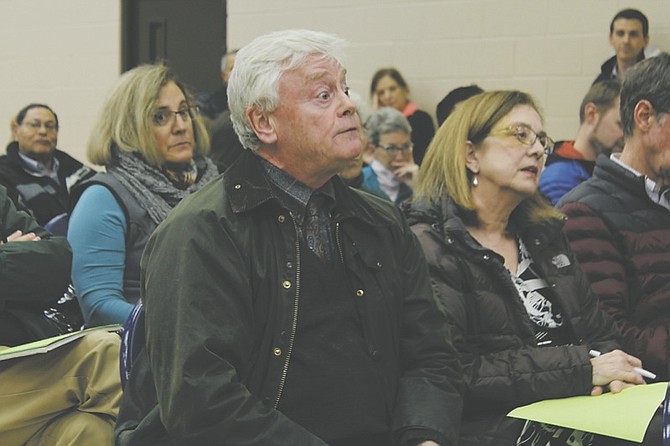 Mike Weatherbee, who does not support the proposal, asked Corbett if he received financial incentive or landscaping deals in exchange for his support of the proposal. Corbett answered by saying, “No, that would be illegal.” Photo by Fallon Forbush.

Abutting homeowner Bill Corbett, who lives in the adjacent Crosswoods community, says that he and most of his neighbors along the property line support the Sunrise proposal.

Nearly 200 people crowded into three rooms of the McLean Community Center on Tuesday, Jan. 24, to voice their opposition or support for the proposed Sunrise Senior Living development on land at the northwest corner of Kirby Road and Westmoreland Street.

There were far more opponents than proponents at the meeting.

The proposal would build a 73-unit assisted living facility that could accommodate up to 90 residents and would also provide a memory care unit for residents with Alzheimer’s disease and dementia.

This was the second time the McLean Citizens Association invited the public to discuss the proposed development. The meeting was organized by the group’s Planning and Zoning Committee.

The developer is seeking what is known as a special exception from the county to build the facility in the residential area. This is because the county requires such facilities in residential areas to be built on parcels that are a minimum of five acres. The proposed location is only 3.7 acres.

Sunrise Attorney Stu Mendelsohn says that Fairfax County has waived the five-acre rule every time an assisted living facility has been proposed.

“They’ve acknowledged that you don’t need five acres for this kind of facility,” he said. “The bottom line is, we meet the requirements of the zoning ordinance,” says Mendelsohn.

ONE COMMUNITY MEMBER spoke in favor of the proposal at the meeting.

“I’m feeling lonely,” Bill Corbett, who lives in the adjacent Crosswoods community, said during the meeting. He and most of his neighbors whose homes are along the property line next to the proposed facility support Sunrise.

“We would rather have their building 100 feet away from their fence than a mansion 25 feet away,” he said.

According to Mendelsohn, abutting homeowners like Corbett are supporting the proposal because there will be a 100-foot buffer between the properties. By right construction could be much closer.

“The people who are most impacted are the ones who are supporting us,” Mendelsohn says.

But homeowners in other surrounding communities and other homeowner groups voiced concerns during the meeting. Their primary concern is the traffic at the intersection, which community members say already experiences severe congestion.

Due to these traffic concerns, Sunrise moved the proposed entrance to the facility from Kirby Road to Westmoreland Street. The company also committed to providing a shuttle to and from the metrorail for its employees.

Community members had also objected to the facility’s proposed three-story height. With this feedback, Sunrise lowered the height of the building to 35 feet. It did this by moving one the building’s proposed floors underground. The newest version of the proposal also moved 33 of its 55 parking spaces to an underground parking garage.

“We heard very loud and clear that they didn’t like the height,” says Mendelsohn.

In July 2016, the MCA approved a resolution that opposed Sunrise’s proposal, but that was before the organization made all these revisions to its application.

Throughout the process, Sunrise has advocated that there is a need for its facility in the area.

In May 2016, the Fairfax County Health Care Advisory Board sent a memo to the Board of Supervisors stating that Sunrise had demonstrated a need for the development of an assisted living and memory care facility in the McLean community.

This letter cited Sunrise’s own analysis, which found that four nearby facilities were experiencing high occupancy levels:

At the HCAB’s May 2016 meeting, Sunrise also told the board that as of February 2016, the memory care units at nearby facilities were at full occupancy and other assisted living services were at or near full capacity. Sunrise also said demand would continue to grow.

NEARLY 19 PERCENT of McLean’s total population is aged 65 or older, according to the 2015 American Community Survey by the U.S. Census Bureau.

Still, this is Sunrise’s second attempt to build the facility. After receiving significant push back from the community for its first design years ago, Sunrise withdrew the application, according to Mendelsohn.

He says the company’s latest revisions have addressed the community’s concerns, but some opponents cannot be satisfied because they just don’t want the Sunrise community at the location.

The MCA Board of Directors will be voting on a follow-up resolution at its next meeting on Tuesday, Feb. 1, after deadline for this paper.

“We wouldn’t be having this conversation if Sunrise could simply build on that property by right,” says MCA President Jeff Barnett. “The question is whether that modification would be appropriate. We’re going to be taking the law and community values into consideration.”

The draft of the resolution, which was circulated to the community on Sunday, Jan. 29, resolves to remain opposed to the project and urges the Board of Supervisors to deny the application.

“Historically, the MCA has supported citizens,” Mendelsohn says. “The ultimate decider is going to be the Board of Supervisors and they’re going to be faced with a decision that could have ramifications on whether our seniors can continue to live in this community.”

The Fairfax County Planning Commission is scheduled to consider the application on March 8. The county’s Planning and Zoning Department will publish a staff report some time in February.

A hearing with the Board of Supervisors has not been scheduled yet.