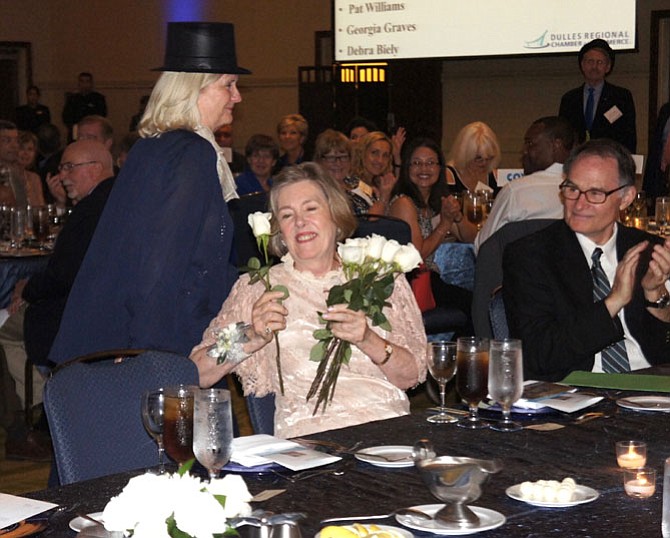 At her retirement celebration, Dulles Regional Chamber of Commerce President and CEO Eileen Curtis was honored with a parade of former Chamber Board Chairpersons, wearing top hats and each presenting the honoree with a rose. Photo by Andrea Worker.

From left: Richard Thoesen, former mayor of Herndon, Virginia Del. Jennifer Boysko (D-86) and Bill McKenna, Herndon Town Council Member, all turned out to honor Eileen Curtis on her retirement. “She gave amazing support to Herndon,” said McKenna. “There were so many changes during her 23-year tenure, and she adapted to all of them.”

From left: Fairfax County Board of Supervisors Chairman Sharon Bulova, and supervisors Kathy Smith (D-Sully) and Pat Herrity (R-Springfield.) “She is a tremendous advocate for business in our area. I am particularly grateful for her partnership in my annual job fairs,” said Herrity. 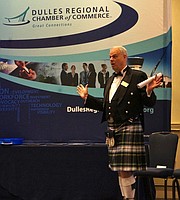 James Lawson, Chairman of the Board, Dulles Regional Chamber of Commerce conducts the business of electing the organization’s new officers and the new President and CEO, John Boylan, at the celebration of outgoing leader Eileen Curtis.

Twenty-three years later, addressing the sell-out crowd at her retirement dinner at the Hyatt Regency Dulles on July 12, Curtis said she is still amazed and incredibly grateful to have received that job offer. “I still don’t know why they hired me. I had no experience or credentials for the job. But I think it turned out ok.”

“Job-seeker Curtis” brought with her a resume where she served as the Director of Music and Cultural Affairs for WGMS Radio. She had a background in broadcast journalism and special events, helping to produce the event on the Washington Mall to welcome home the Iran hostages. Helming the Chamber may have been a second career for Curtis, but it seems she was the perfect fit for an organization that was also preparing for new responsibilities, new priorities and a new place in the community.

UNDER HER LEADERSHIP, the Herndon Chamber grew into the Dulles Regional Chamber of Commerce (DRCC), establishing itself as an engine for economic growth in the community and becoming an important partner in the transformation of the area into a thriving high-tech hub.

Twenty-first century issues, opportunities and challenges faced Curtis and the Chamber, and Curtis was instrumental in directing the organization to face them all head-on. During her tenure Curtis helped the Chamber become a renowned advocate for STEAM (Science, Technology, Engineering, Arts, and Math) education, innovation and business and workforce development. Curtis also developed partnerships with six area high schools to mentor students and help prepare them for the changing skills demands of today’s businesses.

Curtis launched the annual Innovate Conference, where the works of today and the ideas for tomorrow are discussed by business leaders and innovators from around the Commonwealth. At last year’s fifth edition of the event, Gov. Terry McAuliffe was the keynote speaker.

Curtis and the Chamber also worked toward making the Silver Line Metro expansion a reality, realizing that transportation and infrastructure were critical to the success of area businesses small and large, and of importance to the community as a whole.

Controversial issues didn’t stop Curtis, either, as she persuaded the Board to adopt a platform of immigration reform. The DRCC is the only chamber in Virginia or within the metro area to have done so, with the exception of the U.S. Chamber of Commerce.

At her retirement dinner, accolades poured in, both from those present, and via video submissions of congratulations and thanks from McAuliffe, Sen. Mark Warner (D-VA) and Sen. Tim Kaine (D-VA), U.S. Rep. Gerry Connolly, Herndon Mayor Lisa Merkel, and many more. In attendance at the affair were Fairfax County Board of Supervisors Chair Sharon Bulova, Supervisors John Foust (D-Dranesville), Pat Herrity (R-Springfield), Cathy Hudgins (D-Hunter Mill), and Kathy Smith (D-Sully). State senators and delegates were also on hand, as were other officials and business leaders too numerous to name.

“Eileen has meant so much more to this chamber than being its president,” said DRCC Chairman of the Board James Lawson. “We are all better people for knowing her as both a colleague and a friend.”

AFTER ACCEPTING certificates, and proclamations, and other tokens of appreciation, Curtis took to the podium to make her farewell remarks – and she still had one last surprise in store for her audience. “Bet you didn’t know I used to be a singer,” she said, before breaking into a re-lyricized version of the song “Memories” from the musical “Cats” – and bringing the audience to their feet with her operatic talents and the witticisms of her revised lyrics.

Curtis already has plans for “what’s next.” There’s travelling and volunteering on the agenda, as well as a turn as an author. Her first book is almost ready. “Chamber Tales” will “answer the burning question of what a chamber actually does,” said Curtis. A few of her colleagues responded with exaggerated looks of alarm and laughing requests to “please be kind” when recounting some of those tales.

Mixing business with pleasure, Lawson also oversaw the votes approving the new officers for the coming year, and for the installation of John Boylan as the successor to Curtis. “They are big shoes to fill, but we are looking forward to further success and further community service under John’s leadership, but Eileen, know you will be missed and remembered.”