If you mess up, there's a brand new box. 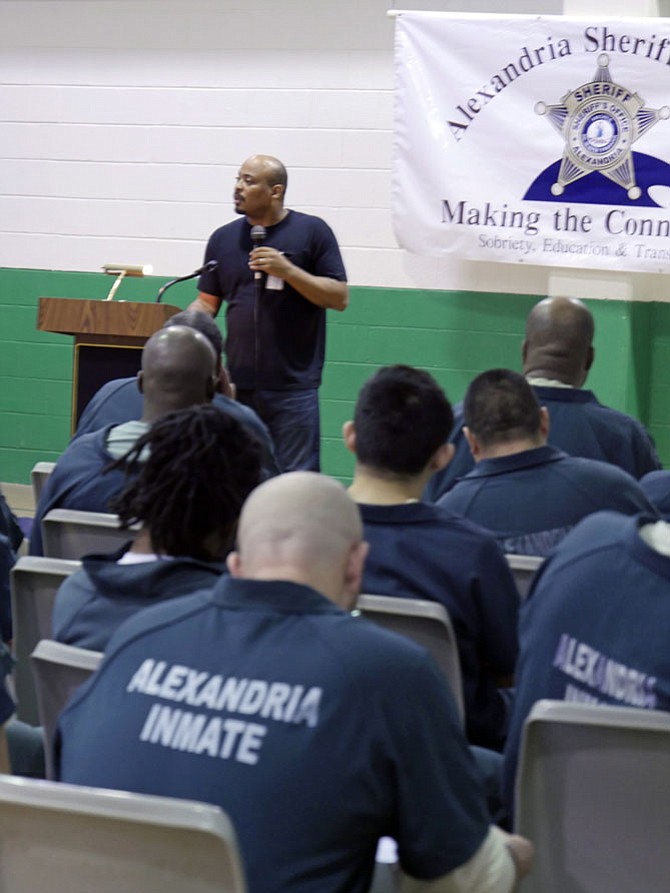 Eddie Ellis, arrested for first-degree murder at 16, tells inmates at the William G. Truesdale Adult Detention Center that one has to want to change. Photo by Shirley Ruhe.

Alexandria — Forty-five inmates sit in rows in the gym at the William G. Truesdale Adult 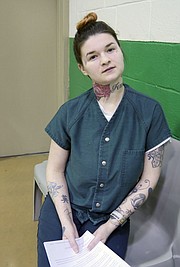 Rebecca Hamilton says a lot of the girls in the Detention Center don't want to change like she does. She says they plan to go out and do it again but not get caught.

Detention Center with men in front, women in back. Some have come to get the cookies and soda, others have come for something to do. But as the program progresses, eyes are riveted on Eddie Ellis who was clearly more than a motivational speaker. He had been where they are, and he understood what they felt.

Ellis had been arrested for first-degree murder when he was 16, and the recommendation was that he spend the rest of his life in prison because he was irreparable. He was found guilty of manslaughter and sentenced to 22 years in prison but he said at least it gave him a second chance. He was moved from prison to prison and state to state. Along the way he spent 10 years in solitary confinement. Ellis was released in 2006 after serving 15 years which was half of his life. When they called him to be released he said he thought it was fake. "I didn't know how to do anything but what I was told. You know like a baby has to crawl before he can walk, I was working my way up to a different job." He said in jail "we believe we can do all of this stuff. But you need to make a list of things you can do and things you 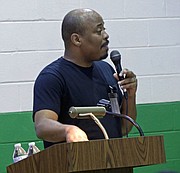 Eddie EllIs says that some inmates may not be at a place where they want to listen but it's important for him to try.

Ellis said that some people just don't want to listen but he was going to try today. He said the inmates may not be in a place where they can relate to everything he had planned to say. He explains he went through a lot of different phases and he didn't always accept or hear what people said to him at the time. He just didn't want to hear it. "But I went back and told people 10 years later that they said something to help. It is important to try." He explained his change came "when he got tired of it, of being locked down and not able to see my family." His wife sat along the wall as he spoke. She said, "We stick by each other. Everybody has struggles." But she added that these are more difficult than most.

Ellis explains his own story to the group. He had been locked down for 10 years and when he got out they wanted to send him to a "program" and his mind was to go straight to the streets. He said he bucked the program for 25 days. "The counselor said, 'you don't have a drug problem; you have a life problem.'"

He struggled with panic attacks and insecurity. The only job he'd ever had was in prison.

"I wanted to be a taxpayer, go the Redskins game, all that stuff. Now," he said, "I live my life as a person who is free. I don't want to go back." He says he tells people, "If you can't do the time, don't do it. I don't want to hear it no more." He says you have to save yourself.

The theme running throughout his presentation was "don't be afraid to change. You are the only one holding yourself back. People just make bad choices. Move on; try something different. It's time." He added, "I want to raise my kids and enjoy life. If you mess up, there is a brand new box."

This program, held May 28, is part of a monthly series offered by the Alexandria Sheriff's office for inmates at the County Detention Center.

Rebecca Hamilton says Ellis' comments touched home with her. She has been in the Detention Center for three months. She is facing a mandatory 10-year minimum sentence for sex trafficking. She was 16 "and I had nobody. This pimp found me and told me he loved me and would take care of me." She said she didn't want to prostitute herself the first time but after a while it became normal. "It was just my life."

Then she said that the pimp got sent to prison but it didn't matter because there was a large group of others, and his brother was still there. When she found out "they were laying hands on" some of the younger girls, "I told the girls I would protect them and that's how I got caught." Hamilton had been locked up in Henrico State Prison for seven months and she says when the Federal agents picked her up from state prison to detain her at the Detention Center, "My heart broke. I couldn't do nothing but cry." She will be sentenced July 14.

Hamilton says that she likes it when the person who is a motivational speaker like Ellis has been there."So that was a good thing." She explains that a lot of the girls who are in the Detention Center are there for stealing or crimes that are not too serious. Hamilton says the girls aren't serious about changing; they just talk about doing it a different way next time and not getting caught. For instance, instead of sex trafficking, maybe selling drugs — switching up the trade — maybe stealing because if you get caught, you do less time.

Hamilton said she is focusing on what she needs to do to change so that she doesn't go back to the same ways. She said, "Nothing changes. People are still doing the same things. Your friends try to get you back doing what you were before and you have to say, 'I'm more important than you.'" Hamilton says that for people to be reached they have to have the mindset for change.

She points to the tattoos curling up her arm and around her neck. "I used these as an excuse not to get another job. I said nobody would hire me with all of these tattoos."

Matthew Belland is 31-years-old. He has been in and out of the system since he was 13 and at the Detention Center since October 2016. He was sentenced for a parole violation related to his earlier armed robbery charge. Belland says Ellis was very inspirational and very accurate because Belland is at the self-preservationist stage in his own life instead of what everybody else says or does. "Preparing myself to do something different, I thoroughly understand." He stressed, “I need a change." He is determined not to come back here one more time. And he knows he needs to change his old ways of thinking.

Belland says he has been in and out of a lot of the same places as Ellis. But he says if you have to be locked up, this is the best place to be. He has been using his time to reestablish family relationships and do a lot of reading. He says his 14-year-old daughter comes here to visit and he doesn't want this for her. "She understands I got caught up under something old and when you make mistakes you pay. She is a good girl and has a GPA of 3.5.”

Belland could relate to Ellis' message about the necessity of being willing to change. He says this isn't the best place for that because a lot of the people in the Detention Center are set in their ways and expect to return to their former lives. He says he doesn't feel he is falling back but he still wants to do everything to make sure he changes and doesn't come back here again.