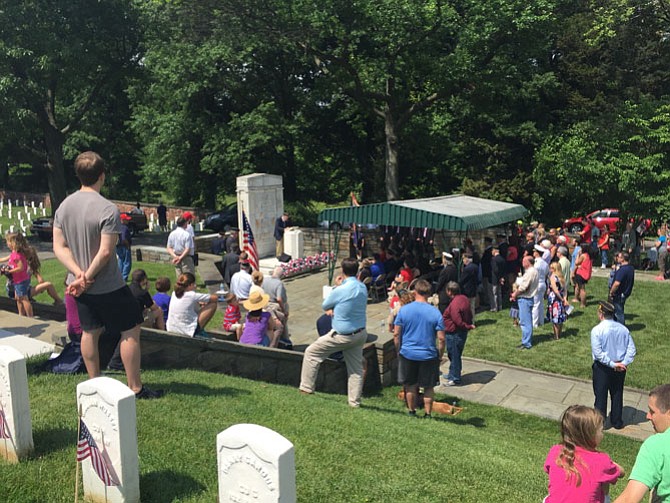 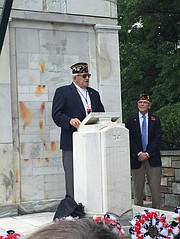 Regis Monahan recalls the military service of both of his fathers.

Alexandria’s National Cemetery is smaller than Arlington’s, with a little over 4,500 interments. On Memorial Day, May 29, there’s not as much of the ceremony and tradition as at other military cemeteries. It’s quieter. It’s old soldiers telling war stories: stories about fathers, stories about friends. As they disperse afterwards to find a grave of someone they knew, or to head back to the American Legion Post in Old Town, it’s a reminder that behind each flag and under each grave is a story.

For some, the day was a remembrance of the generation that preceded them. Richard Evans served in Korea and Vietnam, and said he and the other veterans present had warm hearts when they looked out and saw the people gathered to honor their fallen comrades. Evans said as he was laying his wreath, he thought back to Bedford, Va. Bedford had the highest capital loss of life in WWII of any town in the United States. Over 95 percent of those were lost on Omaha Beach at the spearhead of the landing. Evans said that as he was looking out across the field of graves, he couldn’t get that little town near Lynchburg that suffered so heavily out of his mind.

In 1943, Regis Monahan’s father was in a P-38 crash. A mechanic from another squad rushed over and pulled Monahan’s father to safety. His father’s savior was a black man who was working as a mechanic for the Red Tails squadron. The mechanic lost many of his fingers and was badly burned by the crash. After he was discharged, he came back to visit see the family at their 12,000 acre peanut farm. Monahan said the man helped take over operations, helped raised the children, and even taught them to fly airplanes before they earned their drivers’ licenses.

Because his family was Catholic and had a black man helping to raise the children, Monahan remembered his family being harassed by men in white sheets, most of whom had gotten exceptions from the draft because they were growing crops.

“I considered him a father,” said Monahan. “He made sure we all went to college and drove us 60 miles each day to take us to a parochial school.”

“We may look like anyone else, but deep down, there’s still a lot of emotions,” said Glassman. “We may look good on the outside, but inside we’re tearing up. For months I wanted to be by myself. I told my wife to leave me alone. I told them they wouldn’t understand.”

Glassman said he’s been surrounded by a band of brothers and that when he got home, he couldn’t stop thinking about them. He worried about them constantly.

When he reflects on Vietnam, Glassman said there were fun times as well, like seeing Vietnamese rock groups playing American songs at the enlisted club. At the end of the night, the last song they played was what Glassman called Vietnam’s national anthem: the Animals’ “We Gotta Get Out of This Place.”

Glassman said that if anyone sees a Vietnam veteran, give them a long overdue welcome home.

For Mike Mixon, it was a little bit of both. His father served in the Pacific during WWII. Mixon said as he looks around the graveyard he’s awestruck by the great love shown by the millions who served. Mixon also thinks of his friend Lt. Col. William H. Northcutt, called Billy Jack by his friends. In the 1960s, Mixon said Northcutt dropped out of college to serve in Vietnam. When he returned, he continued his career in the military and married his dream girl. Mixon said Northcutt had a great sense of humor. They would be in line together to get meals and the cook would ask what kind of eggs Northcutt wanted.

In 1989, Northcutt was piloting a KC-135 strato-tanker over Canada when a defective fuel pump caused an explosion, killing all four crewmen. Northcutt left behind a wife and two daughters. Mixon said he called Northcutt’s wife on Memorial Day this year and it was still very emotional.

“On this Memorial Day I think of his great sacrifice on that dark day in 1989,” said Mixon. “God bless Billy Jack.”