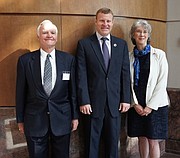 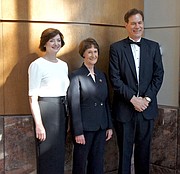 The 2017 honorees were feted at a reception at the County Government Center on the morning of June 6. Following this gathering, the Lords and Ladies were escorted into the board auditorium where their accomplishments were publicly acknowledged and each received a certificate declaring their status.

In announcing the visit by Lord and Lady Fairfax (the originals), Bulova laughed that the noble guests seemed a bit confused by the fact that there were more peers in Virginia whom they would be meeting. “Only here in Fairfax,” she told him. “We’re special.”

Lord Fairfax: John J. “Jeff” Lisanick is a former client at New Hope Housing’s Eleanor U. Kennedy Shelter. Desiring to give back to the homeless community, he joined the Consumer Advisory Council (CAC) as an original member in 2012. Since being elected chair of the CAC in 2013, he has been a member of the Governing Board with a goal of preventing and ending homelessness. Lisanick took his passion to end homelessness to a new level in July 2015 when he was hired by New Hope Housing as the residential coordinator of the same shelter in which he was once a client. He now serves as the coordinator of residential services, overseeing seven different sites.

Lady Fairfax: Jane Miscavage has been an asset to both Fairfax County Public Schools and the community at large. In 2007, she began serving as a founder and manager of the Food Allergy Support Group of Northern Virginia, where she helped over 400 families access up-to-date allergy research and health care professionals. Her commitment to children and families continued through her service to #IamFCPS, a grassroots organization that advocated for a fully funded 2017 FCPS budget, and later, as the Vote Yes Meals Tax Campaign Manager. Currently, Miscavage continues to serve the schools as vice president of the Fairfax County Council of PTAs.

Lord Fairfax: Richard Knapp is a dedicated citizen of Fairfax County, working to reinvigorate and preserve Fairfax’s past while also bettering the future of the Route 1 Corridor. This is demonstrated by his work on the Old Mount Vernon High School Reutilization Task Force and its Steering Committee, helping bring a landmark back to life. His co-chairmanship of the Embark Advisory Group has revealed a guiding hand in easing transit in Lee District, and his continued work with the Pinewood Lake HOA and as the Lee representative on the Southeast Fairfax Development Corporation shows dedication to his neighbors.

Lady Fairfax: Michele Duell’s commitment to improving the standard of living for the residents of Lee District is hard to match. Her service with the Friends of Richard Byrd Library saw the creation of Educators’ Night, a program that helps teachers get free books, while her dedication to pedestrian safety led to the installation of Fairfax County’s first HAWK Signal. Her work with the Springfield Civic Association helped give a voice to residents and their needs within local government, and her active support of her FCPS neighborhood elementary schools contributed to student enrichment initiatives.

Lord Fairfax: Over his 33 years as a teacher, activities director, assistant principal, and principal, Dale Rumberger could always be found in the hallways talking with students, attending school plays or concerts, or cheering in the stadium stands. As a principal, he guided the opening of two new high schools, a task that earned him the Washington Post's Distinguished Educational Leadership Award. In his spare time, he is a community leader and advocate, most recently as the South County Federation president. Since retiring, Rumberger returned as a consultant to FCPS and serves as an interim principal wherever he is needed. He is currently the acting principal at West Potomac High School.

Lady Fairfax: Mattie Palmore, Mount Vernon’s “Wonder Volunteer,” is a trailblazer for women’s rights and human service issues. For over 30 years, she has worked as an advocate for housing the homeless, assistance for the physically and mentally challenged, and on behalf of youth and senior citizens. She is a former director of Good Shepherd Housing and Families Homeless Transition Program. She co-founded the Women’s Group of Mount Vernon, which provides a safe environment for victims of abuse. She now serves as the Mount Vernon representative to the Fairfax-Falls Church Community Services Board. She has made a difference in the lives of hundreds of persons in need.