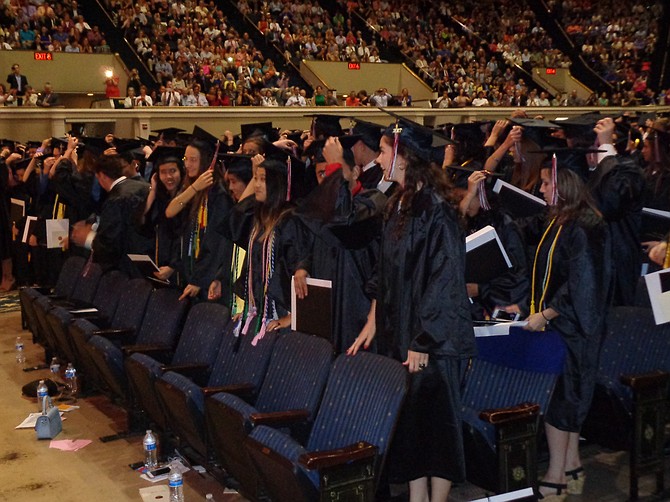 Graduates entered to thunderous applause from those gathered at Constitution Hall. Photo by Thomas Kendziora/The Connection

Director of Student Services Tim Buckley delivers his speech to the senior class.

Timothy Buckley stood on the stage at DAR Constitution Hall in Washington, D.C., looking out over a sea of black caps and gowns.

“It has truly been an honor to see you grow into the mature men and women that you have become,” he said to the 475 students gathered.

The director of student services at James Madison High School was chosen by the class as its commencement speaker; he said he was honored to receive the invitation in February. Buckley was a counselor at Thoreau Middle School for two years before returning to the same position at Madison. The now-seniors were seventh and eighth graders those two years, so Buckley has been around several of them for their entire time in secondary school.

“This will be a very unique opportunity,” he said afterward. “I would say 75 percent of those kids, I have seen and known since the beginning of seventh grade, so this class will always be a special one for me.”

THE GRADUATES processed into the arena at 11 a.m.; several county school board members and a plethora of elementary and middle school principals were on hand for the ceremony. Buckley was front and center on the stage.

While senior awards were handed out at convocation, three students received honors Friday. Nick Conforti and Sarah Franklin won the school’s citizenship awards. Daniel Gerke won the Faculty Award, the highest honor the staff can give to one of its students.

Neil Going was the student speaker at the ceremony. Students were all invited to submit speeches to a committee, and a select few were invited back to audition.

During his speech, Going told the story of his brother, who left community college to become an electrician. Going said that this story is often met negatively because it goes against the norm of graduates continuing their education, and he challenged his fellow students to do what they feel is best for them and for those around them.

“Each of us should have the courage of our convictions to dedicate to a personal and impactful cause,” he said. “Whether wiring the electricity for buildings that provide shelter for the homeless or mending foreign relations, every contribution matters.”

A hefty portion of this class is indeed attending college; scattered cries of “Blacksburg,” where Virginia Tech is located, could be heard upon exiting Constitution Hall. A majority of students are indeed making college the next step, Buckley said, but some are joining the military or taking a gap year.

Before the graduates all head their separate ways, though, Friday was a chance to reflect on what they accomplished together. This senior class won more athletic state titles than any in school history, including one last week, and several other programs have received high honors during the last four years.

“Madison is our stomping grounds,” Going said during his speech.

DURING THE CEREMONY, Principal Gregory Hood referenced the school’s 1967 class, which graduated in the same building. He noted the drastic difference between the years — they didn’t have cell phones or laptops or even Slurpees back then — but said that this class’s impact on Madison will be remembered in time.