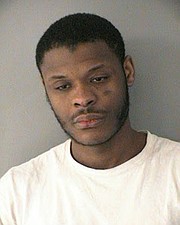 Martin Walker, 25, of Largo, Md. was sentenced on Friday, March 3, in the Arlington County Circuit Court to 17 years in prison for his role in a shooting on Columbia Pike in 2016.

Judge Daniel S. Fiore imposed the sentence for the charges of attempted murder, malicious wounding, use of a firearm during the commission of a felony and possession of a firearm by a convicted felon.

On April 20, 2016 at approximately 10:30 p.m., Arlington County Police responded to a report of a dispute in the 3600 block of Columbia Pike. Arriving officers located one male victim suffering from a gunshot wound to the leg. He was transported to the hospital with non-life threatening injuries.

The initial investigation revealed there was a dispute between several subjects and a business owner over the sale of a vehicle. One subject brandished a firearm and shot multiple rounds towards the victim who was sitting in his vehicle. Following the shooting, the subjects fled the area. Officers observed the subject’s vehicle and initiated a short pursuit on northbound I-395. The pursuit was terminated in Washington D.C. U.S.s Park Police assisted the investigation with the use of their helicopter.

Detectives from the Department’s Homicide/Robbery and Tactical Units developed suspect descriptions. Members of the SWAT Team took Walker and Joseph Thompson into custody from a residence in the 2400 block of S. Lowell Street. Thompson, 27, of Manassas, previously entered an Alford plea to the charge of attempted malicious wounding by mob and was sentenced to serve one year in jail.

Through the course of the investigation, detectives determined that the initial male victim suffering from a gunshot wound had been an aggressor in the dispute. Gregory Porter Jr., 22, of Triangle Va., previously pled guilty to the charge of attempted malicious wounding by mob and was sentenced to serve one year in jail.

Detective S. Roeseler was the lead detective and the case was prosecuted by Commonwealth Attorney Josh Katcher.