Rise to the Occasion
Votes

Rise to the Occasion 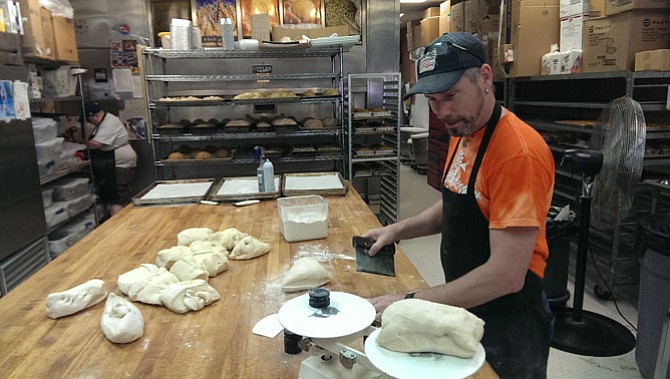 At 4 a.m., while most people sleep soundly, Jeffrey Connelly is up baking bread in Burke. Here he’s cutting white bread before the sun is up. Photo by Tim Peterson. 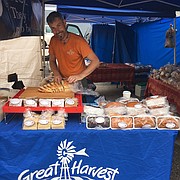 During the summer, when Great Harvest Burke and Lorton have a presence at 13 farmers markets weekly, their daily count rises to 600-800 loaves. 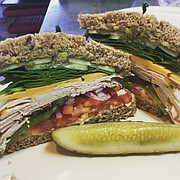 From the main bakery in Burke, Connelly typically makes three bread deliveries daily to Lorton, a satellite location that bakes some of its own bread and also functions as a cafe making sandwiches, espresso, etc., where people can sit and read, and meet socially or professionally. 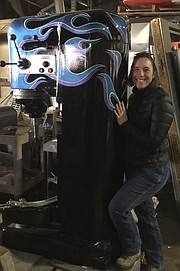 Owner Jeanette Scott Moler of Woodbridge poses with the mixer at Great Harvest Lorton. The paint scheme was inspired by her custom Harley Davidson motorcycle.

At 4 a.m., while most people sleep soundly, Jeffrey Connelly is up baking bread in Burke. The Woodbridge resident said starting from scratch all the way to cutting a slice for someone to sample motivates him to perform at his best.

“You’re creating something people put into their body,” Connelly said. “It’s providing nourishment, plus he said he’s looking for that “wow experience.”

Connelly’s team at Great Harvest Bread Co. Burke mills their own wheat in the bakery. With a set of mixers ranging up to a mighty 140-quart Hobart, as well as a cavernous 48-sheetpan oven, the bakery produces around 150-200 loaves in the winter. During the summer, when they have a presence at 13 farmers markets weekly, the count rises to 600-800 loaves.

They craft at least seven bread varieties daily, then add specials for holidays such as St. Patrick’s Day and stuffing bread for Thanksgiving, as well as scones, muffins and even treats for dogs.

Aside from the company’s proprietary Honey Whole Wheat bread, Connelly said he’s free to bake whatever else he wants while still under the Great Harvest banner.

From the main bakery in Burke, they typically make three deliveries daily to Lorton, a satellite location that bakes some of its own bread and also functions as a cafe doing sandwiches, espresso, etc, where people can sit and read, meet socially or professionally.

Connelly’s business partner Jeanette Scott Moler purchased the franchise package of both Burke and Lorton locations from original owners Jules and Nicky Verster in January 2010. They run the business together. The Burke site was built in 2004, and Lorton was opened in 2007 and relocated in 2010, Connelly said.

In Virginia, there are 10 locations of the national Great Harvest chain.

Connelly said he and Jeanette are now looking for someone to buy and continue Great Harvest in Burke and Lorton while they prepare for a new adventure.

“We want people with the same passion for food, for people,” Connelly said. “Someone who can do what we do, maybe do it better.” Maintaining a passion for the bread and great treatment of the community are goals in looking for a new owner, he said.

BRAD LAPISKA OF LORTON is senior pastor of Engleside Baptist Church located in the Woodlawn area of Alexandria. He spends anywhere from 90 minutes to two hours at Great Harvest in Lorton he said, six days a week, for morning coffee and sometimes breakfast including sandwiches, scones or yogurt.

“It’s a tremendous place, because of the varied seating they have there,” Lapiska said. “Anywhere from one to four people can gather together for a meal or for a meeting.”

The pastor has used Great Harvest in Lorton for many meetings, both social and for the church.

“It seems like no one wants to come to the office anymore,” Lapiska joked. “The family feeling they have, the atmosphere, is conducive to relaxing or having a nice quiet meeting with someone.”

More than just appreciating the friendly vibes and sense of community at Great Harvest, long-time customer Peggy Brookshire of Springfield said she also has great respect for people who can regularly turn out great quality bread of various kinds.

Decades ago, Brookshire remembers her grandmother and aunts in northwestern North Carolina would bake their own bread, waking at four in the morning to start it from yeast.

“[Baking bread] is a very beautiful thing to do,” she said. “It’s time consuming, takes a lot of energy, love and attention to pay to bread as it rises.”

Brookshire says she doesn’t have it in her to follow in their footsteps, especially when she can depend on a local shop to have the product. Cranking out loaves including her favorite cinnamon raisin walnut bread weekly “is no small undertaking,” she said. “And it’s worth every penny. If I can have that and peanut butter, I can live for years.”

Regardless of their new adventure, Connelly said “bakery is like family,” and they intend to keep up years-long friendships with customers and former employees, many of whom they’ve seen go off to college, start other jobs and get married.