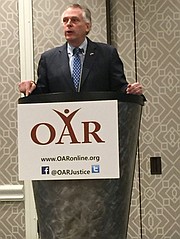 Gov. Terry McAuliffe addressed the Offender Aid and Restoration (OAR) annual Second Chance breakfast on March 1. The audience applauded as he described his efforts in 2016 to restore voting rights to 206,000 Virginia felons who had completed their sentences.

Although his executive order was overturned by the Virginia Supreme Court, he reminded the audience he has so far restored the rights of 151,000 individuals on a case-by-case basis, as the court required.

The OAR event drew more than 500 people to the Crystal Gateway Marriott to hear how the organization works and hear first person stories of people it has helped. OAR provides reentry services for men and women returning from incarceration, both pre- and post-release, and manages the community service function for the Arlington and Falls Church courts.