The Sound of Heaven Touching Earth 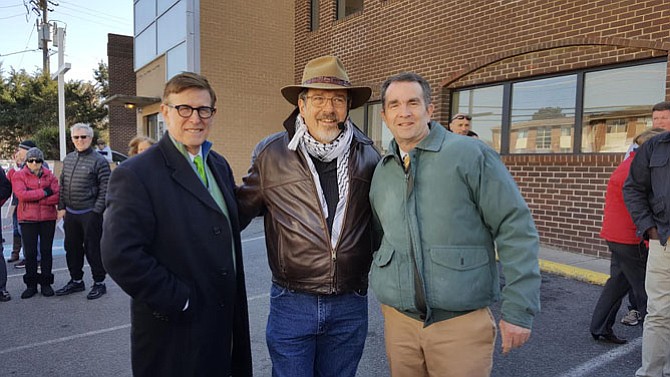 Vigil for the Immigrant 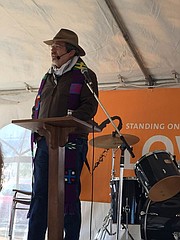 Keary Kincannon speaks at the March 4 Vigil for the Immigrant & the Homeless.

Mark 1:14-15 — Now after John was arrested, Jesus came to Galilee, proclaiming the good news of God, and saying, “The time is fulfilled, and the kingdom of God has come near; repent, and believe in the good news.”

Anyone who knows the work of contemporary Gospel singer William McDowell, knows he has a way of lifting the gathered congregation to such heights of praise you can feel heaven and earth touch! One of my favorites of his songs is called “Spirit Break Out.” The lyrics are simple and repeat themselves in a building crescendo of praise.

He starts by singing:

Our father, all of heaven roars your name,

Can you hear it, the sound of heaven touching earth!

The sound of heaven touching earth!

Then the song moves to a plea:

Spirit Break out, Break our Walls down

Spirit break out, Heaven come down

Finally the song ends with:

Your glory, shaking up the earth and skies,

We wanna see your kingdom here.

I cannot remember a time where I have wanted to see God’s kingdom here more than I do now.

On the morning of Feb. 8, seven or eight Latino men left our hypothermia shelter — a shelter that operates through the combined efforts of Ventures in Community, New Hope Housing and Rising Hope Mission Church. As soon as the men got across the street, ICE agents swooped in on them and pounced on them.

Congresswoman Linda Sanchez (chair of the Congressional Hispanic Caucus) recently met with the acting director of Immigration and Customs Enforcement (ICE) concerning the recent removals and the scope and breadth of the new executive order. She said the takeaway from that meeting is that under the new executive order the universe of people that are priority for removal is greatly expanded and now all are at risk. ICE told her that we can and should expect many more arrests and removals this year.

Tuesday word leaked that President Trump’s address to Congress would offer a compromise on Immigration Reform. But we soon discovered that his “Merit Based” immigration proposal is code for “cream of the crop only.” If you are like us and already have an education, established businesses and skills, then you have merit. There was no recognition that those who come with nothing, are fleeing a life of poverty or even violence, can come to our great land and build a life of merit.

On Wednesday, Daniella Vargas, a 22-year-old dreamer, was arrested after a press conference where she was telling the story of how her father and brother were arrested on their way to work. As a family they have been in the United States for 15 years, working hard and creating a productive life for themselves; contributing to the community. Daniella is in school to become a math professor. But because the family overstayed their 90 day Visa Waiver 15 years ago, ICE announced they are now pursuing immediate deportation without a court hearing or bond.

When Jesus started his ministry he started it saying: “The Time has come; the Kingdom of God is at hand. Repent and believe the Good News!”

Jesus is telling us that this is the time! Don’t wait! Act Now! Another world is possible! The Kingdom of God is at hand, it is within reach, in our grasp. But we have to repent and believe the Good News to receive it. To repent means to reorient our values. Turn away from the self-serving values of the world and toward the inclusive love of God.

When the son of God is telling us that “Another world is possible” we need to listen. And instead of acting in fear of each other, start figuring out how to work with each other to make it happen.

Our life together in the United States is not a “Zero Sum Game.” Jesus teaches us that if we seek first the Kingdom of God and his righteousness then all we need and more will be added to us. Another world is possible. In the words of the Gospel singer William McDowell, “Can you hear it, the sound of heaven touching earth?”

The time has come, the kingdom of God is at hand. Repent and believe the Good news.

To repent and believe the good news means we have to start living it and acting on it now. There is no time to waste. Don’t agonize, organize.

When I was asked to join a prayer vigil and press conference at ICE Regional headquarters, I did it to stand up as a witness to the truth of God’s love for all. Yet I was not sure I wanted to take this to another level. When I arrived I was encouraged to take this action because my District Superintendent (who I report to) was there to support and encourage me.

And again I was encouraged and emboldened because an old friend and mentor, Jim Wallis, from Sojourners magazine, a progressive Christian voice for spiritual renewal and social justice, was there to encourage me to speak boldly for God.

Later that afternoon my Bishop called to say, “Well done good and faithful servant.” She too encouraged and lent her support. It is important that we support one another in standing for righteousness. Today she contacted me to lend her support and encouragement before our prayer vigil.

Governor McAuliffe, Senators Kaine and Warner, have all issued letters asking Homeland Security Secretary John Kelly to explain what’s going on with the ICE Raids. Governor McAuliffe asked “why are they detaining Virginia residents without cause or allegations of specific criminal activity?” Kaine and Warner have issued statements that they are not getting satisfactory answers.

Senator Warner invited me to be his guest at President Trump’s first address to Congress. Seventeen other members of Congress invited others to the speech who are either undocumented, dreamers, or immigration advocates, as a way of saying Trump’s vision of America is not our vision.

Congressman Don Beyer, Senator Tim Kaine, Congresswoman Linda Sanchez, and Congresswoman Michelle Lujan Grisham and a host of our local elected officials show up at a press conference at Rising Hope to say we will not stand for this kind of treatment toward immigrants.

Can you hear it? The Sound of heaven touching earth!

On Wednesday the Chicago Catholic Cardinal tells his priests if federal immigration authorities knock on the doors of their parishes without a warrant, priests should turn them away and call the archdiocese’s lawyers.

On Thursday the Cardinal from the Archdiocese of Washington issued a statement that the church’s values compel it to oppose the deportation of people already living in the United States.

The Rev. Jeff Mickle, the United Methodist District Superintendent for the Alexandria District, issued a letter to Methodist clergy quoting Christian activist Jim Wallis, “If the choice is between honoring a president’s campaign promise or honoring the commands of Jesus, the Church has no choice but to follow Jesus, even if it leads us to stand up against the actions of the government.”

Today! Look around you. Look at you here; hundreds coming out today on a very cold day to show support to the immigrant in our community. Saying we stand with you. We pray for you. We will work for your safety and the safety of our community. We are one. We welcome you in our community.

Another World is possible but we have to repent and believe the Good News. We have to live it. We have to act on it. We cannot take it for granted. The time to organize is now. The Kingdom of God is at hand.