And worrying about cost of losing coverage. 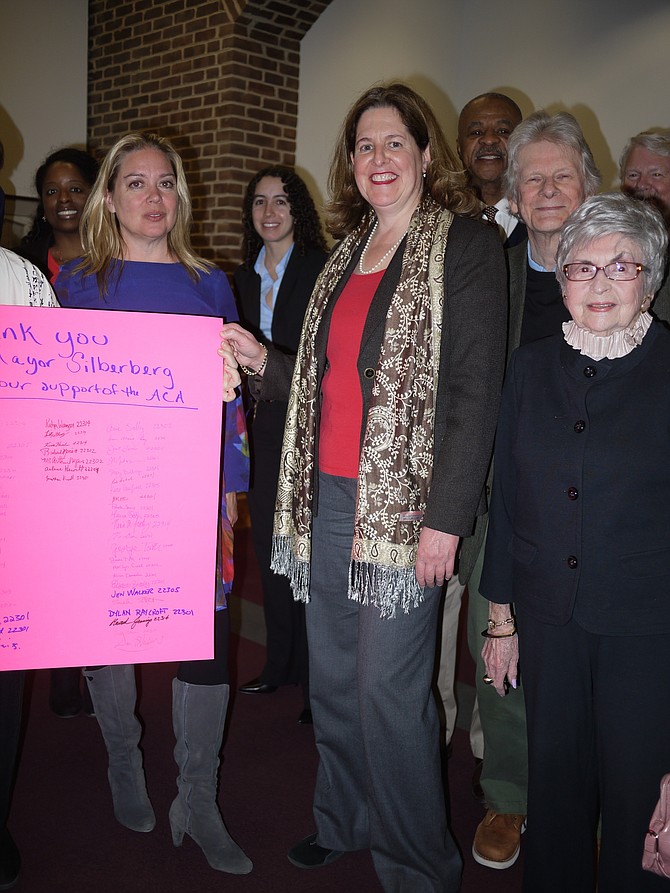 Laura Toth from Alexandria joined the small group of healthcare activists in the lobby of Alexandria’s City Hall on March 21 because she is very afraid of losing “Obamacare.” For Toth, it is a matter of life and death. She spoke about the “invisible illness” shared by millions: depression. “One medication alone costs $300 a month. People max out on health costs, they have to go into their 401K. I live with my parents to make ends meet. I lost my job as an EMT B (Emergency Management Technician Base) a while back and will need to self-insure now. The American Health Care Act (ACHA) plan doesn’t cover mental illness. People don’t understand how scary it is to think you won’t be able to pay for medications that are keeping you functional.”

Toth is one of 24 million Americans who risk losing their lifeline: the ability to afford high-cost prescription drugs that keep them in jobs, out of hospitals, and off welfare. Mayor Allison Silberberg, Councilman Timothy B. Lovain, McArthur Meyers, Richard Merritt, Dan Hawkins, Arlene Hewitt, Sarah Stott, and other interested Alexandrians speaking out on behalf of their fellow residents met to talk about the impact of the ACHA as envisioned by the GOP, and to support the mayor’s signing of the “Cities Thrive” letter to Speaker of the House Ryan, which she did on March 18.

“How many Alexandrians will lose health care?” asked SIlberberg. “I’ve seen the number 5,000 but I am pretty sure it’s double that. The budget would be cut $150 million. We need to raise our voices, but we also need as many voices as possible to bring to the table. We need to avoid the partisanship and speak in one voice in favor of health care access.”

The Congressional Budget Office (CBO) estimates that under the AHCA, 24 million Americans will lose mental health coverage by 2026. Of these, 14 million fewer people would be covered by Medicaid, according to the website for the National Alliance on Mental Illness (NAMI).

Lovain told the crowd that no matter what, Alexandria was one of the communities that would stand by the uninsured. It’s annual health fair will now be spearheaded by Neighborhood Health, but continues to be supported by local residents who volunteer time and money to make it happen.

Toth asked the group: “How can an ordinary citizen help support your effort? I'll be one of those who loses health care. I want to do what I can.” Silberberg suggested those who want to help can work at the health fair, and support efforts of politicians to tweak the ACA, not repeal it. “We need to tweak it,” said the mayor, “How can we improve it? What do doctors want it to look like?”

“Stay involved or get involved,” said Lovain. “We have a three front war going on here: we need to support the nonprofits, find funds, find volunteers, support legislation for medicare expansion,” he said.

“The Health Fair we hold annually now is important; but we can’t support it with just one agency,” said Merritt. “Support ‘Spring2Action,’” he urged, referring to Wednesday, April 5, Alexandria's Giving Day. Spring2ACTion is a 24-hour online event that provides a way to connect donors to the charitable causes they care about most and encourages them to take action. In 2016, 8,613 donors raised $1,337,493 for 152 nonprofits serving Alexandria. To learn more, see: to: https://spring2action.razoo.com/story/Alexandria-Cares- For-