Goal is to name the Shenandoah Salamander as state amphibian for the Commonwealth. 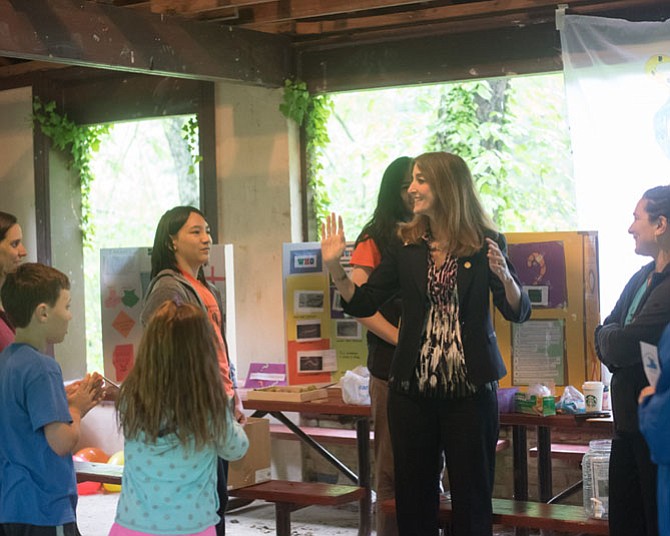 Virginia Del. Eileen Filler-Corn (D-41) expresses pride May 6 in her constituents who advocate for causes in which they believe at the Salamander Saturday 2017 public awareness event in Springfield at the Hidden Pond Nature Center. She said she was impressed by Salamander Savers 4-H when they visited her office in Richmond last winter. Beckha Drake 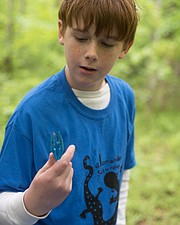 Ben Drake of Burke studies a critter he found May 6 in Pohick Creek at Salamander Saturday 2017.

Saturday morning as they showed visitors of a county nature preserve how a small amphibian helped the environment.

Brothers Gabriel, Jonah and Samuel Kim — plus members of their conservation club Salamander Savers 4-H — held their second consecutive Salamander Saturday event in Springfield May 6 as an annual public awareness initiative about these small lizard-like creatures.

Participants gathered in a pavilion overlooking Hidden Pond and looked at information boards designed by club members. A Spotted Salamander and Marbled Salamander, rescued in the larval stage and raised by Hidden Pond Nature Center site manager Mike McCaffrey, were guests of honor.

Jonah Kim, 13, has been interested in salamanders since early childhood. Two years ago, he witnessed a fish relocation at a neighborhood lake in need of dredging and rehabilitation. He noticed county parks officials saved the fish but no one did anything about the amphibians left behind.

“What about the salamanders,” is the question he asked, then formed a new environmental cause. He leads the group as president of Salamander Savers 4-H.

THE BROTHERS KIM did their homework and built a website at www.savethesalamanders.weebly.com to show pictures and share papers they wrote to explain the purpose of this amphibian and why its habitat should be protected.

Their journey as Salamander Savers 4-H is part of their home school education. So far, they have learned community activism is hard work and a long process of creating public awareness.

Their club — chartered last year by the 4-H youth development organization — welcomes children ages 8-18 and meets each month at various locations. The group traveled recently to Richmond to meet with lawmakers about their organization. They also meet in the field to clean up local lakes and conduct stream monitoring of Sideburn Run in Fairfax — a dirty stream they cleaned up and helped maintain for the county.

Besides working with his older brothers, Sam enjoys his job as treasurer.

“I like doing the funds,” the 11-year-old said at Salamander Saturday 2017. His duties include filling out forms and processing paperwork, including a $100 donation they received last winter from the Woman’s Club of Fairfax.

“It’s just math,” he simply states. Sam also is the graphic designer behind the annual Salamander Day event poster and the club T-shirts that sport a spotted salamander logo he illustrated.

His older brother, Gabriel, 15, is club secretary and prefers to run the education program of Salamander Savers 4-H.

“Just basically teaching people about it” is his favorite part. He says the club will lobby Virginia General Assembly again next year. Their objective is simple: Name the Shenandoah Salamander as the state amphibian.

THIS EFFORT has helped club members learn the nature of politics in that all decision makers do not agree on one particular species to call state amphibian.

“Everyone we go to has a separate choice for salamander,” explained Anna Kim, of Fairfax, Feb. 15 at her sons’ club meeting. She says state wildlife officials want to name the Marbled Salamander as the state amphibian and a lawmaker prefers the Eastern Hellbender of southwest Virginia.

The Virginia Herpetological Society posts a “Shenandoah Salamander for Virginia State Amphibian” logo on their website. The group lists 56 species that call the commonwealth home.

Two of them are state endangered species: Mabee’s Salamander of Southeast Virginia and the Eastern Tiger, found in only three counties.

The Shenandoah Salamander is the only species endangered at both state and federal levels. Anna notes the natural habitat of this species is protected land at the Shenandoah National Park in Luray.

The fact this species is unique to Virginia is what appeals most to Salamander Savers 4-H, she admits. Another fact is this popular national park is visited by thousands of people each year.

Anna reports Salamander Savers 4-H has 135 supporters, who signed their online petition at change.org to name the Shenandoah Salamander as the state amphibian of the Commonwealth of Virginia.

Sign their petition online at www.change.org/p/virginia-state-house-nominate-the-shenandoah-salamander-as-va-s-state-amphibian or simply type

goo.gl/pQrf2V to get there faster.