From Virginia Run to Surrey, England 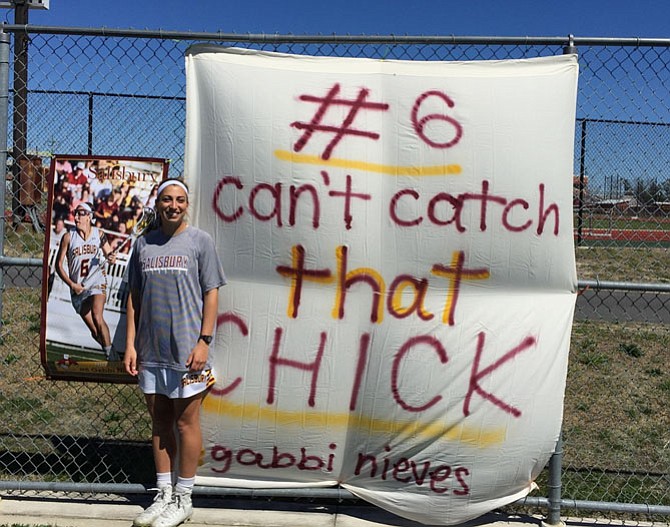 Gabbi Nieves in front of the banner her college teammates made for her in April. Photo Courtesy of Gabbi Nieves

All-American lacrosse player Gabbi Nieves is a local girl making her mark in the world of sports. From Centreville’s Virginia Run community, she played lacrosse for SYA and then for the Nova West and Capital Lacrosse teams.

A midfielder, she continued her lacrosse pursuits at Paul VI High School, playing all four years there and graduating in 2013. Now 22, she’s a senior at Salisbury University in Maryland and has been invited to play this July in the 2017 World Cup Lacrosse Festival in Surrey, England.

“I started playing lacrosse in seventh grade; I’ve always loved the sport,” said Nieves. “And I think it’s incredible to be asked to play in the World Cup.”

She hopes to attend; but with her sister’s upcoming wedding, plus unplanned family medical expenses, money is tight. And players must raise their own funds to support the trip for the entire team and coaching staff. So she’s started a Go Fund Me page and hopes the community will help provide the $5,300 she needs to make this dream come true for her. Go to www.gofundme.com/gabbis-European-Lacrosse-World-Cup.

As a child, Nieves played soccer and basketball, but focused on basketball and lacrosse in high school. “I was better at lacrosse than the other sports, and it combines all the sports I’d played,” she said. “It has the speed of soccer and the offensive and defensive sets of basketball – meaning you can play either a zone or a man defense.”

Nieves has also played lacrosse all four years in college, including her freshman year, when Salisbury won the national championship. But she especially shined as a junior, when she was named a first team All-American in May 2016 by the Intercollegiate Women’s Lacrosse Coaches Association (IWLCA).

Her college team plays Division 3 NCAA lacrosse in the Capital Athletic Conference (CAC), but didn’t make it to the final four this year. However, the IWLCA remembered her stellar performance last season when she was named to the first team All-CAC, IWLCA first team All-Region and the CAC All-Academic Team. She was also honored as CAC Offensive Player of the Week.

The season runs January through May; and last season, Salisbury finished with an 18-3 record. And during the NCAA playoffs, it lost to its rival, F&M (Franklin & Marshall), by one point. This year was rockier; but last October, Nieves and her team’s goalie, Gianna Falcone, were both invited to play in the World Cup Lacrosse Festival, July 15-23, in England.

“We were two of just 30 players chosen out of 7,600 candidates,” said Nieves. “It’s a huge honor. I think I was chosen because of the accolades I received last season. I’m aggressive and I play on both ends of the field. I’m also a leader, determined and motivated, and am a captain this year.”

The U.S. has both a North and a South team, and she’s on the latter. “I’m very excited,” she said. “I’ve never been to England or Europe before, and I’m looking forward to playing other countries. And I’m really glad that Gianna is invited, too, so I’ll have a friend there who I already know. Only having two days to practice with girls we’ve never played with before will be challenging. But other than that, it’ll be a fun experience.”

At Salisbury, Nieves majored in journalism and public relations, with a minor in marketing. She’s graduating May 25 and can’t wait to see her family again. “I’m a homebody and I haven’t been able to go home during lacrosse season, except for Easter,” she said. “I just love being home with them.”

She’s not yet sure what career path she’ll take, but she does have some advice for other young, aspiring athletes. “Just do your best every day and have fun with your sport,” said Nieves. “When you’re relaxed, you do your best; and even if you lose, it’s not the end of the world. You have to think of the bigger picture: It’s a sport — it’s meant to be fun.”