It Belongs in a Museum in Alexandria
Votes

It Belongs in a Museum in Alexandria 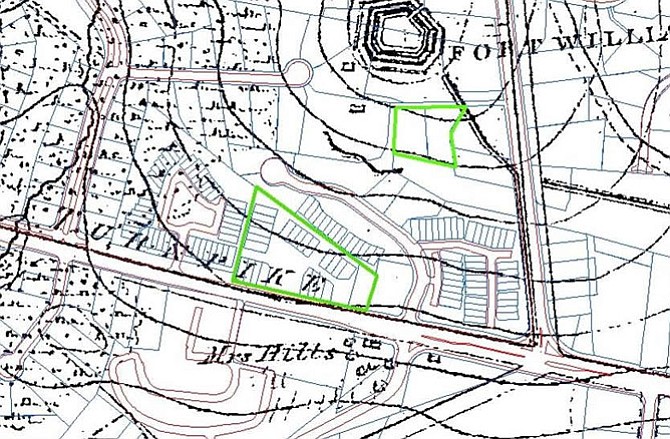 An example of an overlay map, with a plot of land outlined over a Civil War map titled Environs of Washington from the National Archives. Photo contributed

The Hopkins Company’s fire insurance map from 1877, showing properties along the waterfront.

A 1927 aerial photograph with a GIS overlay.

Garrett Fesler isn’t one of the bad guys.

Alexandria is an old city, so when a construction crew starts to dig into the ground, there’s a chance they might stumble on an item of historical significance. That’s why Fesler and other members of the City of Alexandria Archaeologists get involved with projects, sometimes before digging starts. When they meet with landowners in the city, Fesler says there can be one of two reactions.

“Some are excited and happy to work with us,” said Fesler. “Others have little interest in doing so. People often assume it’s going to cost them money if Alexandria Archaeology comes in to do work.”

But Fesler says while challenges can arise, the goal isn’t to stall construction or add to costs.

“This is at no cost to the landowner,” Fesler said. “It can potentially be a hinderance to a project, but if they let us know their timeline and resources we will do everything in our power not to delay anything.”

“We have a bank of paper records still,” Fesler said. “We’re trying to go more digital. I will check back references to the address. I have other data sets I can check. One of the most powerful ones is a GIS system that is loaded with 100 historic maps overlaid on the city.”

These maps show layers of the city’s history beneath what exists today. If the maps or records indicate that there could be historic significance to the site, Fesler and his team can do a preliminary archaeological assessment to let the developer know what to expect when they start digging.

According to the city’s Archaeological Protection Code, site plans for land designated as a potential resource area must include archaeological evaluation reports and resource management plans. Fesler says some of the archaeological reports that come back from these developments can be a big asset to Alexandria Archaeology.

“The reports we get on properties throughout the city are enormous and terrific,” said Fesler. “The one on Ramsey Homes is just terrific. Those are being digitized and being released to the public.”

Members of the Board of Architectural review suggested that Alexandria Archaeology work to improve their public image among developers.

“I understand the fear and concern, I would too if I didn’t understand how the project works,” said Fesler. “We’re not the baddies. We’re not going to come in and cost them money and shut them down. We just want the opportunity to work with them.”

“Probably the most difficult situation we have in the city is a fairly aggressive group of bottle hunters and relic hunters who go door to door asking if they can dig people’s old wells and cisterns in their backyards,” said Fesler. “They post their findings on Facebook and sell the artifacts they find, supposedly they agree to give finds to owners, but I know several where they don’t show owners the loot. These guys are the real threat to the archaeological record in Old Town. I check their site regularly, have to steel myself before I do that. Have to brace for ‘what have they done now.’ It’s really just three or four people, but they’ve done a lot of damage.”

“They’re going into people’s yard and digging big holes and then they disappear,” said Cox. “They have undermined concrete block walls. There was one in our neighborhood in a concrete block wall. There’s no liability there. You really don’t want these guys hunting for belt buckles in their backyard. And they’re not going to show you what they find, they’re going to pocket it and say they didn’t find anything.”