If a Tree Falls on the Road …
Votes

If a Tree Falls on the Road …

Although drivers and trees avoid each other, a fall could be fatal. 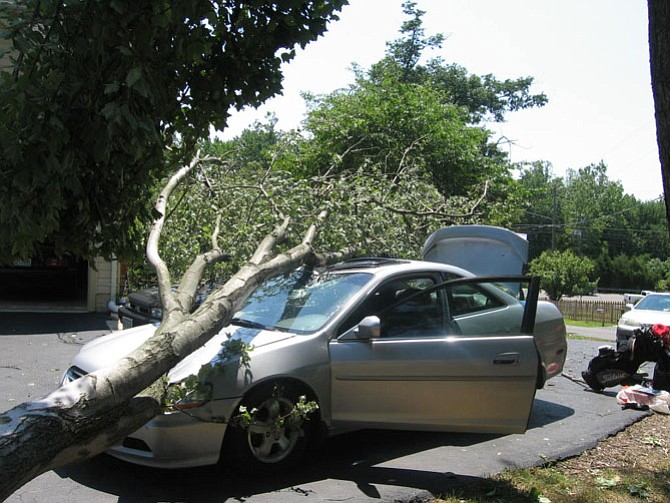 This car was not so lucky during a past storm that roared through Fairfax County. Photo by Mike Salmon.

Drivers using the Newington cut-through, from I-95 to Telegraph Road in 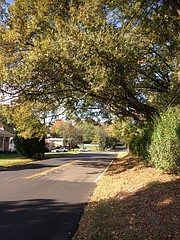 This branch on Newington Road could pose a problem.

southern Fairfax County, pass under a branch that could cause some serious damage if it fell. Although the tree looks healthy, wind or ice could put extra stress on this branch, and the results could be fatal.

All around Northern Virginia, there are probably dozens of situations like this, so it conjures the “what if,” question. Paranoia?

According to John Townsend, the manager of Public & Government Affairs at the Mid-Atlantic division of the American Automobile Association, it does happen.

“In September 2016, a Northern Virginia man was killed when a tree fell near his pickup truck in Woodstock after a mighty gust of wind knocked the tree down. The three passengers were outside the truck when the tree fell onto them, killing the victim,” said Townsend.

Is it an “act of God?” in the insurance world, or is anyone responsible? According to Townsend, tree limbs that fall on a house or other insured structures on the property would be covered for both the damage the tree(s) inflicts on the house and the cost of removing the tree(s), generally up to about $500. In addition, if a tree fell on a house or car, and the owner is insured, in most cases they’re covered. If a tree falls on a house, homeowners insurance will cover removal of the tree and home repairs. However, if a tree falls in the yard, but doesn't hit anything, the homeowner would pay for its removal in most cases.

The county and state have an eye on trees too, along with drivers, said Jennifer McCord at the Virginia Department of Transportation (VDOT). If a driver or resident sees something alarming on the roadside, they can report it to VDOT at my.vdot.virginia.gov, or 800-367-7623.

Also the assorted VDOT maintenance teams that are out on the road every day report issues as they ride the roads, said McCord. “We also have an arborist who examines and marks trees of concern for maintenance or tree contractors to address,” she said.

There are eyes on the trees on the county level as well, said Keith Cline, director of the Fairfax County Urban Forest Management Division. In the county code, 46-1-1, “trees or parts thereof in danger of falling” are listed under health or safety menaces. “We do investigate it if it’s threatening to the public at large,” Cline said. The county also addresses tree danger “on a complaint basis,” said Cline, and works with VDOT to remedy the situation near roads.

If the tree is on private property, they work with the property owner, and on rare occasions, call in a contractor to cut it back, and then they bill the homeowner. “This doesn’t happen very often,” said Cline.

James Donegan at Donegan Tree Service has worked with Fairfax County to take care of roadside tree hazards, and cited the ash tree problem with the emerald ash borer pests that have decimated the ash tree population in the county.