A story of redemption. 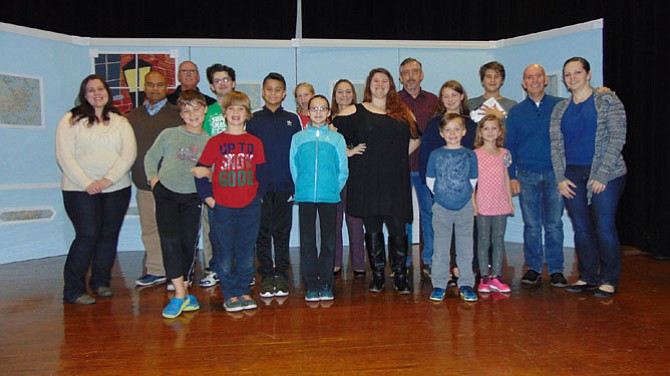 The cast of Alliance Theatre's production of "A Christmas Carol" during rehearsals last week. Photo by Steve Hibbard.

“A lot of the people in this show are people who have been with Alliance for a very long time.” — Maggie Swan, President, Alliance Theatre

The Alliance Theatre is presenting the Charles Dickens' classic, “A Christmas Carol,” from Dec. 8 to Dec. 17 in Centreville. The story follows Ebenezer Scrooge, a man well-known for his miserly ways, who is visited by a series of ghosts and learns how his meanness has affected those around him. It is a transformative tale that teaches that it's never too late to change.

"In my mind it's a sort of redemption story. It's about a guy who is selfish, miserly, and only cared about money and material things versus people. In the process of the ghosts who come to visit him, he sees a new way to be. He becomes a new person and changes," said Maggie Swan of Chantilly, president of Alliance Theatre.

With a cast of 20 people in the play, Swan said this is the fourth time Alliance has done "A Christmas Carol." Alliance Theatre was founded 15 years ago by Elaine Wilson and Pat Kallman and meets at Mountain View School.

"We do about two to three plays a year — musicals, straight plays, original shows. It's mostly for families, we have kids of varying ages, all the way to seniors. A lot of the people in this show are people who have been with Alliance for a very long time," said Swan.

Mike Cash, 63, of Oakton plays the role of Bob Cratchit in his 16th Alliance show. "Bob Cratchit is a man who has borne a lot of strain of carrying the family on a very meager wage. He is beaten down at work but manages to shed most of that at home with his family. This is tough for me because I usually do the comedic stuff," he said.

Anna Marie Carbaugh, 25, of Dumfries is playing the role of the Spirit of Christmas Present. "She is a lot of laughs and she's trying to spread Christmas cheer, in a nutshell," said Carbaugh, who majored in theater at Emory and Henry College. Having been in 10 productions, this is her second role out of college.

She said her challenge was that she's only seen the role played as a man before, "So it was fun to do this as a woman," she said. "I didn't feel like I had many challenges because I could go at it in a new angle. I didn't feel bound to the way it had been done before."

Ed McGee, 53, of Potomac Falls is playing the dual roles of Jacob Marley and the Ghost of Christmas Future. "Marley is Scrooge's deceased business partner who comes back to hopefully change Scrooge's opinion on life so he doesn't suffer the same fate as Marley on earth. Marley is doomed to wander eternity carrying the chains he forged in life," he said.

He said the challenge was to be scary. "Both of my characters are the only scary ones, essentially in the whole play. I've generally played kinder characters — I played Bob Cratchit in a different production in a different company."

Noah Fraize, 21, of Chantilly plays the role of Fred, who is Scrooge's nephew. "He's very infected with the holiday spirit. He loves Christmas and the holiday season and all of its forms. He's basically trying to reach Scrooge and improve his view of Christmas," he said.

He said the challenge was his limited connection to Christmas because he was brought up Jewish. "It's not a subject matter I connect to deeply. I'm usually not playing a very positive character. The closest to a character like this has been with children's theater so it's been a bit of a difficult transition," he said.

Noah Tajudeen, 12, of Fairfax plays the role of Narrator One. "Basically I'm a towns boy, a turkey boy — he gets the turkey for Scrooge in the end. He's telling the story of the show from his perspective and how he sees everything. It's subjective to him because everyone sees Scrooge as a mean person, but he evolves," said the Frost Middle School seventh-grader.

He said the challenge was learning the complex Dickens-style lines. "But when you get entuned to the character, it became easier because you understood how they flowed and it just clicked," he said.

Jack Abidin, 9, of Fairfax is having a lot of fun playing the role of Urchin. "I don't really have any lines; I just basically sing songs. I do have a few lines. I'm in a group of urchins. We sing together," he said.

The Alliance Theatre is presenting "A Christmas Carol" from Dec. 8, 9, 15, 16 at 7:30 p.m.; and Dec. 10 and 17 at 2 p.m. at Mountain View High School, 5775 Spindle Court, Centreville. Tickets are $18 general; $15 for seniors and children. They're planning to have Santa visit after all the shows so children can visit and sit on his lap. Visit the website at www.thealliancetheatre.org.