Planning ahead for Jennie Dean Park. 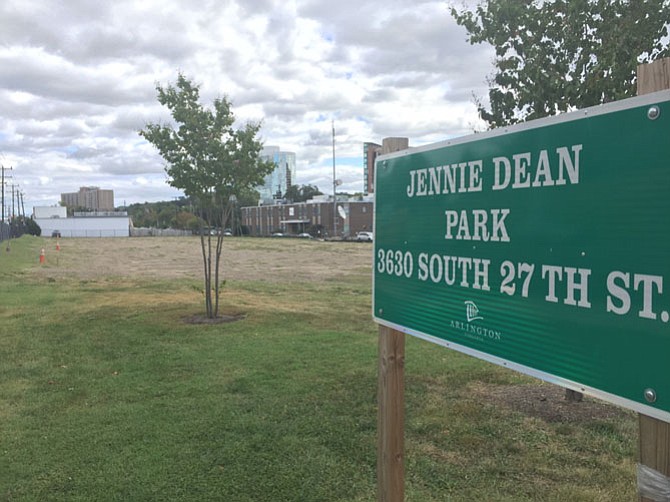 The Jennie Dean Park sign on the lot north of 27th St. S is optimistic at best. Parks generally denote areas of green space and play fields. The main section of Jennie Dean Park on the other side of street would fit. But behind this sign is a wide gravel field that earlier this year housed Arlington’s bus fleet. Those buses have since moved to a new facility, but what comes next?

Throughout the fall, a series of work sessions will meet to decide how to shape the future of Four Mile Run. At a meeting in May, County Board Chair Jay Fisette described the area of Arlington north of Four Mile Run as one of the last large unplanned areas of the county. Fisette warned local community members that the process may not result in the the conclusion they'd hoped but urged them to work together to reach a compromise.

Both parks and art spaces have been dwindling in Arlington over the last few years. New developments throughout the county have led to gradual encroachments on many of Arlington’s green spaces. Meanwhile the demise of the Artisphere two years ago has left Arlington without a major venue for public art. Both groups have been pushing for the spaces along Four Mile Run.

Details about how each of those plans would take shape remains vague. At the meeting in May, one of the alternative plans for that section of Jennie Dean Park suggested that the planned arts hub to the west could be extended onto the former bus lot.

But the idea has gotten pushback from local residents and green space advocates.

“I believe government should fulfill its commitments,” said Michael Grace, one of the working group members. “Arlington County government has said ‘look citizens, we spent some of your tax money and investor and bonds tax money to expand Jennie Dean Park.’ It’s very important for transparency for government to follow through on those commitments, to taxpayers and to bond investors.”

Susan Kalish, director of public relations for Arlington’s Department of Parks and Recreational activities, said the site is currently undergoing a concept plan as part of the broader Parks Master Plan. Once that plan is approved in early 2018, specific designs will be brought forward in July/August 2018. The Four Mile Run Valley Working Group will meet again on Oct. 3 with additional concept designs for Jeanne Dean Park listed as an agenda item.