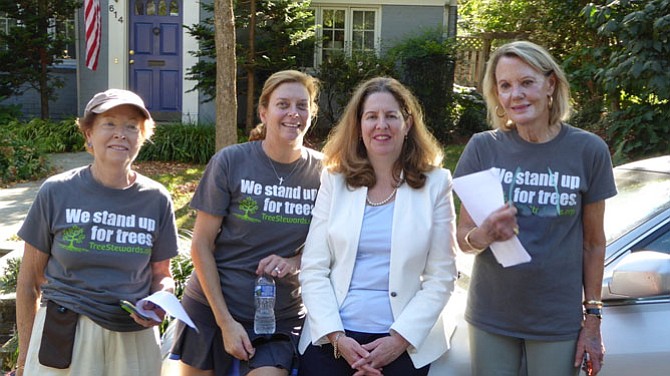 Beverley Hills used to be a shady neighborhood. Located in Northern Alexandria, just south of Four Mile Run, the hilltop used to boast a rich forest of tall canopy trees that made the area notably cooler during the hot summer months than the rapidly urbanizing Old Town. The first non-indigenous inhabitation of the hill was Alexandria residents who rode their horse and buggy in the 1800s to cabins on the hill to escape the city during the summer. But in an ironic twist, over the years those residents who came to the hill gradually led to the slow death of the forest. Among other natural factors, like gypsy moths and warming temperatures and after the Derecho, some of the tall canopy trees fell onto people’s homes and cars. Some residents began cutting down the trees out of fear. But now, two local women are spearheading an effort to re-green Beverley Hills.

Jane Seward and Lynn Gas are neighbors on Beverly Drive, sharing a yard and a mutual dismay at the loss of the neighborhood’s tree canopy. Over 50 percent of the neighborhood’s tree coverage had been lost over the last 20 years. While the local North Ridge Citizen’s Association had formerly coordinated successful tree sales, Seward and Gas decided to take the concept a step further. The newly dubbed Canopy Tree Restoration Campaign included delivery, planting, and mulching the largest tree sizes possible. The campaign also offered lessons in tree care.

Planting grown oak trees in a yard can typically cost between $600 to $800. The Canopy Tree Restoration Campaign offered planting and maintenance services between $250 and $325, just enough to recover maintenance costs and the price of the trees gotten wholesale from Country Springs Nursery.

One hundred thirty-nine trees were sold. Of those, 20 were donations to have trees planted in neighbors’ yards.

As they worked through the process, they said they had to be careful to not get the dregs of the tree lots and find good trees. It’s a process that took time and extensive education on tree types. Seward and Gas, along with their representative to the North Ridge Citizen’s Association, Meghan Rainey, enrolled in Arlington’s Tree Stewards’ spring course on tree care.

“Buying a tree isn’t like buying something off the shelf,” said Seward. “You have to plan that far in advance.”

“This is the time to do it; right now,” said Silberberg. A longtime advocate for greater tree canopy coverage. “We do this because we inherited so much of the beauty we see now and we want to do this for future generations to come. Now we’re going to take this to the next level and take this to other civic associations.”

The two are scheduled to visit the Alexandria Federation of Civic Associations to talk about their process and how other civic groups can replicate it.

“We can help make the process easier for others with what we’ve learned about whole sale,” said Gas.