The Elusive Trail of the Bunnyman Urban Myth
Votes

The Elusive Trail of the Bunnyman Urban Myth 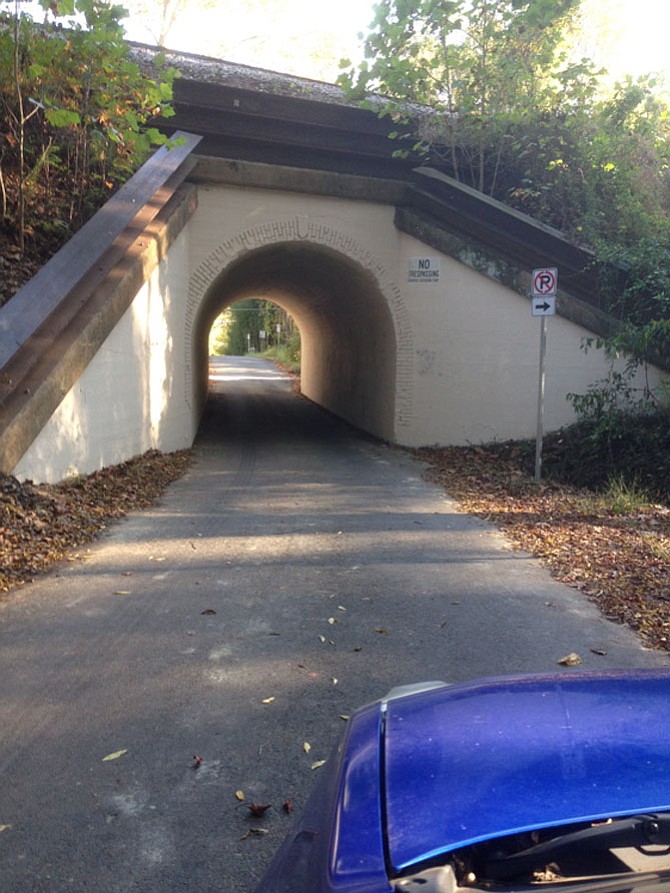 The railroad underpass on Colchester Road is the site of the urban myth known as Bunnyman Bridge. Photo by Mike Salmon.

Fairfax historian Brian Conley has looked into the legend of the bunnyman bridge extensively.

Station has earned a reputation through the years from a story involving dead rabbits, an insane asylum, escaped prisoners, and unexplained deaths, The story, which dates back to 1904, is as roving as the single lane roads that lead to the bridge, but doesn’t have any verifiable facts to stand on, said Fairfax County archivist Brian Conley, who has made the legend of Bunnyman Bridge a focus in recent times.

“First time I heard of it was as a teenager,” he said in a recent “Forgotten Fairfax,” presentation at the City of Fairfax Regional Library on Saturday, Oct. 14.

One of Brian Conley’s slides shows one of the first real references to a bunnyman in a 1970 headline.

Clifton, and rambles to 1904 when escaped convicts were on the run and “they found one of the inmates dead, hanging from the bridge,” the rumor mill reported. In 1905 there was a group of teenagers killed in the area, a murder in 1976 near the bridge, and another in 1987. These reports were all summarized by Timothy J. Forbes, but according to Conley, “this guy doesn’t exist.” The dates and incidents were reportedly from the archives of the Clifton Town Library, which does not exist either, and the “names never check out,” his investigation concluded. It was the magic of the urban legend, helped by the internet that made the legend bigger.

IN CONLEY’S INVESTIGATION, there were a few unsolved murders in the Burke-Fairfax Station area, which added to the intrigue, which included the Holober murders involving the Green Forest Nudist Colony in February 1949, the Ridgeway murders in 1927 where a man named Louis Boersig was executed for killing his wife and daughter, and then the murder of Eva Roy in Burke, where she was strangled and tied to a tree but it was never solved. “To this day, they have no idea what happened to this woman,” Conley said. None involved the bridge though.

In October 1970, there was a story in the Washington Post, with a headline “Man in Bunny Suit Sought in Fairfax,” where a guy with a hatchet attacked a couple in a car on Guinea Road. According to another Post entry “he did appear about a week later right on Guinea Road,” Conley said by a guy with a white thing over his head. That seems to be where the “bunnyman,” part of the legend started. “I can find no evidence that the story was ever told before 1970,” Conley said.

But folks have heard it. Ivy Mitchell, a teenage resident of Clifton, heard it from her babysitter. “An escaped man, he was hiding in the woods eating rabbits, he started to kill people,” she said.

Springfield resident Barbara Evans, who attended Conley’s presentation, heard it from her two sons years ago. “We actually went out to find the bridge,” she said.

There was a story in the Fairfax Globe, dated Oct. 29, 1970, about the police report from the couple on Guinea Road. “I’m convinced this was the genesis of the story,” said Conley. In the Globe story, the man had a white covering on his head, which could have been a pillowcase or a Klu Klux Klan hood, which was mentioned in one of the reports Conley looked at, but “they didn’t say it was a bunny suit, somebody else added that to the story,” Conley said.

IN THAT REPORT, the action was close to a house owned by Lloyd Aylestock, and the house is still there, and someone named Bennet has a wall hanging with the actual hatchet mounted to it. One of the slides had a picture of the actual hatchet mounted on someone’s plaque that was used to break the car’s windows. Conley did track down two of the Aylestock children, who are now adults, and “they backed up the newspaper account,” Conley said. But this was in Burke, and miles away from the bridge. Conley examined 1970’s era photos of the bridge area and there were only three houses remotely close to the

Next in ‘Forgotten Fairfax’ - ‘Night of Terror’

The Next “Forgotten Fairfax,” lecture is on Saturday, Nov. 4, 11 a.m., when Lynne Garvey-Hodge speaks about the “Night of Terror,” with 33 female protesters were incarcerated and tortured at the Occoquan Workhouse for picketing the White House for the right to vote. The lecture is at the City of Fairfax Regional Library, Room A/B, 10360 North Street, Fairfax.

bridge at that time and not much else. One of the houses had ties to a motorcycle gang back then.

In recent times though, there have been a few books written about the bridge, four “low budget horror films,” made about a bunnyman, a rock opera and a bunnyman quilt available on an art website, continuing the urban myth. “It will not die,” Conley said of the story.