With the opening of The Wharf, the Potomac River gets a little more crowded. 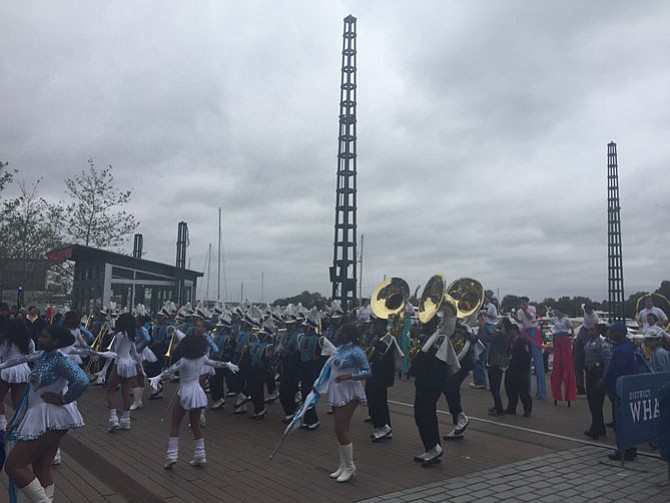 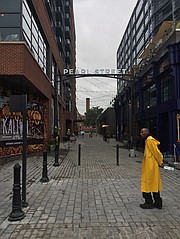 One of the side streets connecting the waterfront of The Wharf to retail. 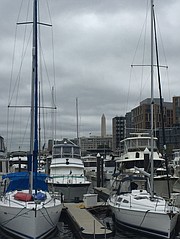 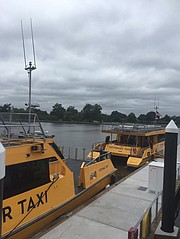 The new fleet of Potomac Taxis parked along The Wharf. 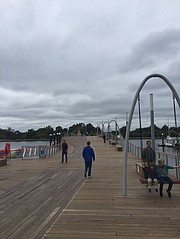 Visitors enjoy amenities and open space on The Wharf.

Despite the rain, the mood at the Wharf was celebratory. On Oct. 12, years of planning and development had culminated in the grand opening of a waterfront boardwalk in southwest D.C. Fireworks were set off in the river. Performers on stilts and a marching band paraded along the waterfront. In a few hours, the Foo Fighters would be arriving at The Anthem, D.C.’s newest music venue and one of the new attractions at The Wharf. But among all of the celebrations, there was one group of revelers a little more bittersweet than the rest: Alexandrians.

Old Town is hurting. While sales tax revenue across the city is on the rise by two to three percent, in Old Town sales tax revenue has declined by two percent between 2014 and 2016. While there was still excitement for the new development on the Potomac, in Alexandria there’s widespread concern that The Wharf could slowly begin to exacerbate Old Town’s economic woes.

“I think it’s a game changer,” said Patricia Washington, CEO of Visit Alexandria. “It’s an anchor of the regional waterfront that raises all the boats. It also raises the bar for what visitors will want to experience. Alexandria will want to work on its waterfront to meet that.”

Washington pointed to things like the opening of Fitzgerald Square at the end of King Street next year as a hopeful sign of Alexandria’s waterfront to come.

Victoria Vergason, owner of The Hour on King Street, said she took the water taxi over to The Wharf on its opening day and was impressed with the atmosphere and festivities.

"Even though a miserable day outside, [there were] so many people out and places for people to hang out and engage with all sorts of activities,” said Vergason. “My sense is there is going to be a lot more of that: continuous activities on that waterfront. Hopeful our City Council and community takes that into account for our future planning. We’re looking at what our city could also be like. We’re different in that we’re more charming and historic, but there’s a sense of newness that I think Old Town is starting to get a little tired for people that would otherwise come here to dine and shop. People are looking for experiences. The Wharf is a great experience.”

“There’s a number of things you can do for not a lot of money,” Vergason said. “You can have things like battleship games and Connect Four. Things like tall chess sets. People just want to do something, and having a nice beautiful space that brings people throughout the town to engage in activities that don’t cost a lot. The Wharf had all sorts of wooden benches and places just to sit. On King Street, from Metro to Market Square, there’s no place to sit down. That’s a problem from a business standpoint. We have an opportunity to observe what’s going on at the Wharf and take the good things and try them out here.”

For Scott Shaw, part of the Alexandria Restaurant Partners that own Vola’s, Virtue Feed & Grain, Majestic and others, the Wharf represents an opportunity and a threat.

“They’ve built into that project real public space and a program to activate that,” said Shaw. “There’s everything from kayak and canoe docks to different live music venues. They’re giving people a reason to go to the Wharf and spend the day. It’s a well conceived project. The threat is if you’re in Bethesda and thinking of taking the kids out for the day, you might go to the Wharf instead of Alexandria. It’s new and there’s more stuff to do there. That’s true for out-of-town tourists, local tourists, regional tourists.”

But Shaw said there’s still opportunity for Old Town to take advantage of the new development through things like the water taxi.

“If you take the Wharf, National Harbor, Alexandria and Georgetown, you have an ecosystem on the river that is compelling,” said Shaw. “It gives people a reason to do any of those things. That’s opportunity-lite, because it’s real but we would be an indirect beneficiary. It strengthens activity on the river, so we gain some benefits, but going back to point one the Wharf is a standalone attraction with more compelling [options].”

Shaw said there were a few big pieces to the Wharf that help put it over Alexandria: the ability for the public to dock boats on the water, a public promenade, and a healthy activities budget.

“When people come down for the weekend, what is there to do?” Shaw asked. “You can only ride the Scottish walk parade for so long. Those parade events are four times a year. This is an opportunity to up our game. I think on top of that list is that we will have new Fitzgerald Square park, so what are we going to do with it?”

But others say the threat the Wharf poses to Old Town business is a little overblown. Robert “Bob” Tagert, publisher of the Old Town Crier, was at the opening of the Wharf. Tagert grew up just across the river in Oxon Hill and said he’s seen a lot of changes to the area over the years, but Old Town was still there.

Lani Gering said she remembered when people were first talking about National Harbor.

“They were talking about how it was going to be taking business away from Alexandria,” said Gering. “But people actually come from the Gaylord over here for the history. I think it’s the same here. It’s a symbiosis for all of this. This place doesn’t have the same history that Old Town does.”

“The Old Town waterfront lacks the size, infrastructure, and uncommitted open space to create anything comparable to the Wharf,” said Ely in an email. “First, the Alexandria waterfront really is quite narrow — from Union Street to the river's edge. Second, the area west of Union is entirely developed, with the exception of the west parcel of Robinson Terminal North; most of that development is comprised of residential properties occupied by folks who are not enthralled by the idea of additional commercial activity along the waterfront. The only remaining development sites along the waterfront are at Robinson Terminal North (which has soil contamination issues that are delaying its development and is isolated from the rest of the waterfront area by Founders Park) and at Robinson Terminal South, where a large restaurant and other crowd-attracting facilities are already planned.”

Ely also noted that while The Wharf was built specifically with attracting mass tourism in mind, Old Town doesn’t have the same infrastructure to support a sharp increase in tourists.

“The Old Town waterfront area lacks the infrastructure, specifically street and sidewalk capacity and off-street parking, to accommodate a substantial increase in visitors,” said Ely. “Old Town, and especially its waterfront area, are unique and not reproducible. Instead of trying to mimic the ersatz appeal of the Wharf and National Harbor, Alexandria should be trying to polish the jewel it has along and near the waterfront. However, the last thing the Alexandria waterfront needs are even more visitors and the traffic and congestion they would bring.”

Shaw said he was aware of resistance to the idea of a more developed waterfront, but said that Old Town faces the risk of being left behind if it rests on its laurels.

“Any discussion of doing new things or doing things differently tends to reignite concerns about development,” said Shaw. “People should be mindful that what’s historically worked for us in the past may not always work for us in the future. We have to be open about that.”

Frank Shafroth, director of the Center for State and Local Leadership at George Mason University, said the truth was somewhere in between.

“I would not describe the D.C. Wharf as a threat to Alexandria’s waterfront; but it certainly represents new competition for Old Town restaurants and retailers — just as National Harbor did when it opened,” said Shafroth in an email. “This new competition is one of the reasons to consider establishing a BID. No matter what, the Wharf will not ruin Old Town’s businesses economically; it will, without question, draw some tourists to the other bank of the river and seek to withdraw from their purses and wallets. So there will be some negative impact, but hardly catastrophic .… Nevertheless, the Wharf project underscores the need for Alexandria to continue its planning and engineering to revitalize the public areas along the waterfront, as we await the next step for the Boat Club to move to its new site, and for the city to then revitalize the Boat Club property at the foot of King Street: no more barbed wire parking lot on the water at the foot of King!”