People At Work: It Takes a Village in Alexandria
Votes

People At Work: It Takes a Village in Alexandria 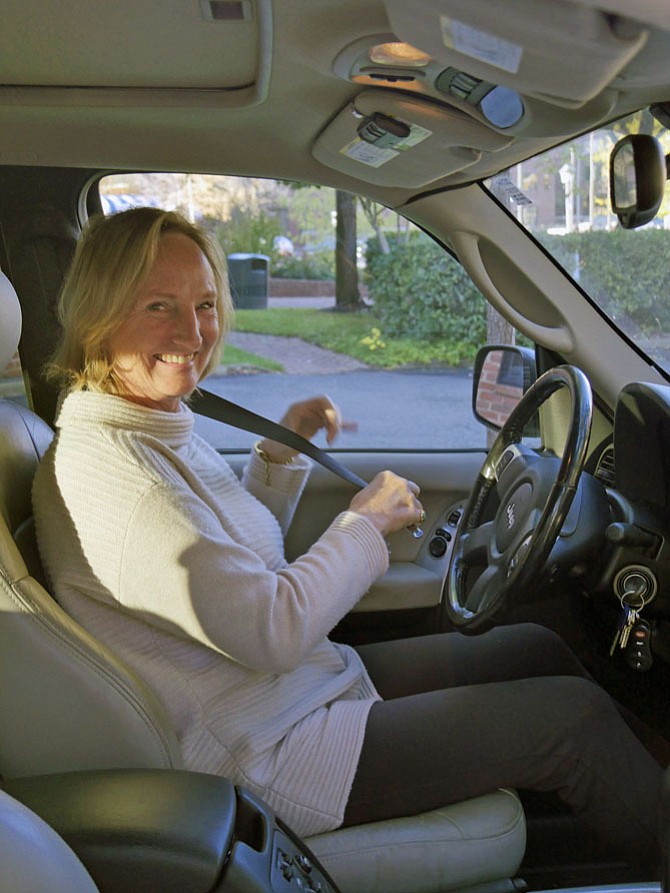 Christena Nielsen, volunteer driver for At Home in Alexandria. Photo by Shirley Ruhe. 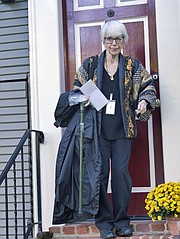 Pat Clopper catches a ride on her way to the National Gallery for her weekly volunteer duty.

Christena Nielsen (Chriss) leaves her office at Peabody Associates on Duke Street at 8:15 a.m., as she does nearly every Tuesday morning, to pick up Pat Clopper. They will be headed to the Braddock Metro station where Clopper will board the train for the National Gallery of Art where she works one day every week.

Nielsen is a volunteer for At Home in Alexandria (AHA), which began in April 2011 as a "village" organization on a neighbors-helping-neighbors model. Members of AHA must live within the City of Alexandria service area and be at least 55 years old. They pay an annual fee and are able to call AHA for assistance as many times as needed. Transportation is the most requested service although other services are provided such as snow shoveling, grocery shopping, errands, dog walking and, in one case, teaching a member to play chess.

Nielsen drives the 10-15 minutes to S. Fairfax Street and points to a red door. "She'll be coming out right over there in a minute. She is usually very prompt." Nielsen says Clopper is the only person she assists with transportation. "I would do more but I am also the treasurer of AHA so I don't have any more time." She says that sometimes Clopper goes to the National Gallery two times a week because she also likes to attend the lectures there. This Friday she plans to attend a lecture by the man who created the new Vermeer exhibit scheduled to open Oct. 22.

AHA volunteers take members to doctor's appointments, their salon or barber, chemo treatments, the grocery store or the gym — anywhere within a 15-mile radius of their home in the City of Alexandria.

Clopper opens the door and heads down the steps toward the car. A quick hug and she and Nielsen spend a minute catching up on details of their lives since last week. Clopper will spend the morning working in art information at the National Gallery and an hour in the afternoon in the print department. She says no one else wants to work with paper anymore. Clopper started with the original group of volunteers in 1984. "I'm the only one of that group left." Then she worked at the gallery as an employee where she answered visitor comment cards. "They found out I could write."

She recalls one harebrained remark from a woman who complained the guards had been staring at her. She wasn't wearing underwear and crossed her legs while sitting on a bench in the Gallery. “My response to her was 'the guards have been found and reprimanded.'" A common question on the visitor cards was why didn't the Gallery have the Mona Lisa. "The answer is that Leonardo gave it to King Francis I — end of story." But she points out the Gallery does have an exquisite Leonardo in Gallery 6 of Ginevra de' Benci the only da Vinci in the western hemisphere. "She plucked her hair so she looked like an egg. She was engaged to a widower and didn't want to marry him."

Somewhere in the middle of all of this Clopper had been an actress, model, ballerina, Italian chef (I'm losing some of my Italian — you know you always say the "o".)

Nielsen says she got involved as a volunteer with AHA because her father predeceased her mother in 2003. "She was pretty lonely in San Diego. I would go out 4-5 times a year but I couldn't stay as long as I wanted." After her mother died, she ran across the man who was the brains behind this organization. "I thought it was a nice way to give back to the community and the volunteers get as much as the people they help. And," she adds, "Pat reminds me of my mom."

People at Work is a weekly column featuring people in the community doing their jobs. Send suggestions by email to slrbc@aol.com.