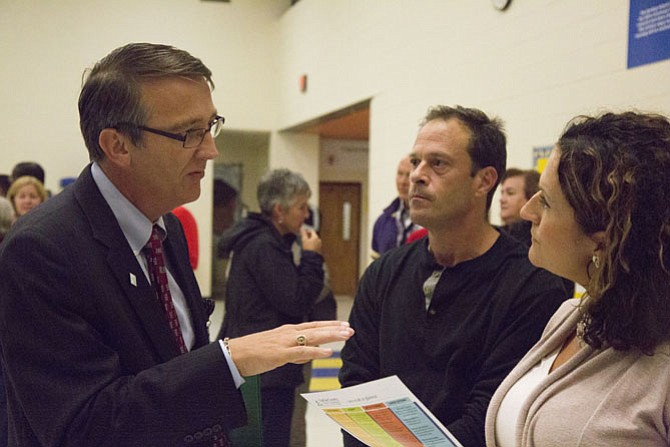 Parents Basil (center) and Elizabeth Sakati of Reston talk to FCPS Superintendent Scott Brabrand (left) about which high school their two children will eventually attend and if they have options to select other high schools in their region. Their children, 11- and 12-year-olds, attend Buzz Aldrin Elementary School in Reston, and will eventually feed into Herndon High School when they finish middle school. Photo by Fallon Forbush. 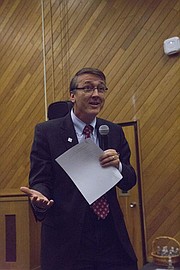 “This is an amazing system,” new Fairfax County Public Schools Superintendent Scott Brabrand told the crowd. He also spoke about his 14-year-old identical twin sons who, “feel a difference in the pressure that is in the school system,” he said. “We want high expectations … but perfection is an unrealistic expectation for children.”

New Fairfax County Public Schools Superintendent Scott Brabrand spoke about how he wants to lead a “premiere school system in this country and among the best in the world,” as Douglas Tyson, assistant superintendent for Region 1, listens. He described the culture he wants to build for the school system as the “Walt Disney World for teachers.”

Norm Hall, a member of the Fairfax County Special Education Parent-Teacher Association, asked FCPS Superintendent Scott Brabrand about the attendance requirements in the Every Student Succeeds Act, which was signed by former President Barack Obama on Dec. 10, 2015, and how its implementation would affect handicapped or gifted students who require special teaching approaches, equipment and care within or outside the regular classroom. “I respect the law and I’m going to work within it, but I’m also going to make sure that we’re treating our kids right and with dignity,” Brabrand said. “I feel that we have a voice in Richmond to get the flexibility that we need,” he added.

A woman asked FCPS Superintendent Scott Brabrand about increasing the after-school late busing program, which were reduced this year because of budget constraints. Brabrand responded by saying he would look into giving principals more flexibility in moving money in their budgets towards this program if it is vital to their students. He also wants to accelerate the idea of integrating the routes of the Fairfax Connector buses into the school system, so students can use public transportation to travel to and from their schools.

Brabrand will host four more “community conversation” meetings this fall. The meetings will begin at 6:30 p.m. with a meet and greet, followed by discussion and questions from the audience from 7-8 p.m.:

The Fairfax County School Board hired Brabrand in June, pulling him away from working as superintendent of the Lynchburg City Schools. He previously worked for the FCPS system in various roles, including assistant superintendent, principal of Fairfax High School, assistant principal, associate principal and teacher. Prior to this, he volunteered at FCPS and worked as an assistant manager for Bell Atlantic.

Brabrand was selected for the job after the FCPS Board hired a nationwide search firm — Hazard, Young, Attea and Associates — and received input from the community. A committee of 19 staff and community members interviewed semi-finalists and provided feedback to the board.

Brabrand earned a Bachelor of Science degree while studying international economics and foreign service from Georgetown University in 1990 and a master’s degree in education from the George Washington University. He finished a doctoral degree in educational leadership and policy from Virginia Tech in 2003.

The Fairfax County Public Schools’ new superintendent is taking questions from the county’s community of teachers, parents and its more than 189,000 students this fall.

Superintendent Scott Brabrand hosted a “community conversation” meeting at the Langston Hughes Middle School in Reston on Wednesday night, Oct. 18. Parents, teachers, students and community members were invited to attend and ask him questions about the 40 schools in the Herndon, Langley, Madison, Oakton and South Lakes high school pyramids that comprise Region 1 of the FCPS system, and the programs and services the schools provide those 38,000 students.

“Sometimes, in my experience, some of the issues that bubble up to the top happen because we haven’t built the relationships, we haven’t established the connections between school and community that we need to be successful,” Brabrand said during the meeting.

Many of the region’s principals, teachers, students and parents attended the meeting in the middle school’s lecture hall to fire their burning questions at the new superintendent.

When Brabrand got up to speak, he boiled his goals down into three topics: Excellence, equity and effectiveness.

In the name of excellence and equity, he committed to bringing test scores up for all students.

“Every time I’ve focused on equity — when I was a principal at Fairfax High School, when I was in Cluster 4 as an assistant [superintendent], and when I was a superintendent in Lynchburg — outcomes for all kids went up; not just some kids, all kids,” he said. “And we’re going to work on that journey in the weeks and months and years ahead.”

The Standards of Learning (SOL) tests for Virginia Public Schools establish minimum expectations for what students should know and can do at the end of each grade or course in English, mathematics, science, history and other subjects.

“Two years ago, we had 14 schools not fully accredited and now we’re down to seven,” he said. “I predict, in the next year or two, every single one of our schools will either be fully or partially accredited in Fairfax County … I’m confident we can do it.”

Herndon Elementary School and Woodley Hills Elementary School in Alexandria, which are both Title 1 schools, increased their pass rates in all four subjects to become fully accredited this year, according to FCPS. They are Title 1 schools because a majority of students’ families earn less than 130 percent of the poverty level (qualify for free meals) or have incomes between 130 and 185 percent of the poverty level (qualify for reduced-price meals).

Brabrand wants to see more of this progress and to maintain the accreditation status at these schools. As part of this effort, he renamed the title for Francisco Durán, FCPS chief academic officer, to chief academic and equity officer.

“We’re going to take an equity journey together,” Brabrand said.

But he also cautioned the overreliance on test scores and pressure put on students.

His 14-year-old identical twin sons, “feel a difference in the pressure that is in the school system,” he said. “We want high expectations … but perfection is an unrealistic expectation for children. And to be honest, I don’t know that I’ve seen perfection anywhere in anybody at any time. We can aspire to it, and we should aspire to it, but we need to leave a little room for the human condition; and I want to help us do that in the years ahead as superintendent.”

Touching on effectiveness, Brabrand talked about prioritizing time and resources to accomplish the goals of the school board, including a budget priority: Paying teachers more.

“We know we only have limited resources,” he said. “My budget is going to focus on our core priority, which has to be paying our teachers market-driven salaries … and all of our support employees getting the compensation they deserve.”

This is because Brabrand wants to attract the best teachers.

“The No. 1 core principle that parents are looking for is an outstanding teacher in the classroom,” he said. “We need to be … the Walt Disney World for teachers.”

In order to establish this culture, teachers have to afford to live in the county, he reasoned.

“We’ve also got to realize the standard of living here requires a market-based salary and supports to keep our teachers here,” he said.

The school system has been strapped for cash in recent budget cycles, with costs only going up as years progress.

FCPS is the third largest employer in Virginia, with approximately 27,500 employees, including 24,600 full-time staff positions, more than 92 percent of which are school-based, according to FCPS.

“We need to be the superstar school system when it comes to the support of our benefits and salary for teachers,” Brabrand said. “Our salary for teachers is below the market across a wide swath of our employees, and we’ve to get to the market average at least. And then we’ve got to have the best working conditions, the best benefits, the best retirement to help support to be the cherry on top of the sundae; to get people here and keep them here.”

The school system’s $2.8 billion budget is primarily funded by Fairfax County, with contributions from Virginia, the federal government and other sources. And it already expends more than 85 percent of its budget for instruction, which includes employee compensation and benefits.

The approved funding level was an additional $1.7 million above the amount in the county executive’s proposed budget, however; it was $59.1 million short of what the FCPS requested.

A series of changes were required to balance the budget, including reducing funding for instructional materials, reducing the number of contracted teacher positions for the Transitional English for speakers of other languages (ESOL) High School Program and implementing new yearly extracurricular activity fees for high school students.

“I have to be honest; my heart has ached at some of the things I’ve come back to see,” Brabrand said during the meeting. “There have been financial challenges across the country, across the state and Fairfax County has not been immune.”

The school board also voted to increase the staffing ratio formula by 0.5 students per teacher, resulting in a reduction of 166.7 positions, according to FCPS.

However, the budget included $44 million for an average step increase of 2.5 percent for all eligible employees, an additional $26.6 million as part of the multi-year plan to enhance teacher salaries and $0.4 million for parent liaison compensation, according to FCPS. The school board also voted to direct the superintendent to prioritize setting aside funding to provide a one-time bonus for employees who will not receive a salary increase as a result of the compensation adjustments in the budget.

Additionally, the school board approved modifications to the Educational Employees’ Supplementary Retirement System of Fairfax County (ERFC), impacting members hired on or after July 1, 2017, according to FCPS.

The FCPS considered implementing $4.7 million in reductions to its pension system by June in time for the fiscal year 2018 budget. These included lowering the interest crediting rate on all ERFC member accounts from 5 percent to 4 percent. The FCPS considered more changes for new or nonvested ERFC members, including instituting a minimum retirement age of 55; increasing the period for calculating the final average salary from three years to five years; and changing the cost-of-living adjustment to equal 100 percent of the Consumer Price Index with a cap of 4 percent.

Brabrand was silent on whether more changes should be implemented to the pension system, but he emphasized his desire to maintain its current levels.

“I’ve only been here three months, I’m not in a position yet to say anything more to the pension changes that have been made,” he said. “We need to pay our teachers more, but we need to still be sure we maintain the supporting packages that help keep and retain teachers,” he added. “I think teachers come first because of the salary but they’re going to stay based on a strong benefits package and a retirement package.”