Casual Adventure Looks Back — and Forward in Arlington
Votes

Casual Adventure Looks Back — and Forward in Arlington 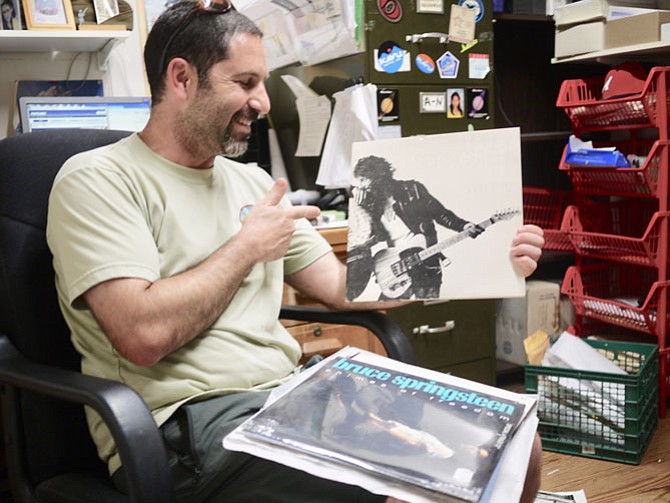 Eric Stern holding up the Springsteen record he and his father liked to listen to on Christmas Eve when they finally closed down for the day. Photo by Eden Brown.

So C’mon down and meet the CA crew,

“Up here on this shelf is Grandfather Sid’s U.S. Air Force hat and his photo,” Eric Stern points out. “He was the family member who had just gotten out of the military after WWII and decided the family should sell Army surplus items instead of groceries.”

It’s all about family for Casual Adventure. One of the hidden gems of the family-oriented staff and facebook page is the “Casual Adventure Rap” song, featured on YouTube. 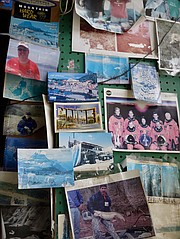 The walls of Casual Adventure: Customers who have climbed Old Rag … or Mount Everest … make a point of recording their travels for the store.

The store is still open for business, and still selling its wares at discounts, until January 2018.

Eric Stern sat in the back office of Casual Adventure on a hot July morning looking around at the memorabilia documenting the store’s past. It was about 95 degrees in the office: the air conditioning had broken, he was expecting large crowds taking advantage of his “End of an Era” sale, and he was feeling nostalgic. It was like being in a museum with a curator who had lived through its history.

Stern’s great-grandfather Oscar Stern opened the store in1940: it was called the District Grocery Store or DGS; later Giant came and the big store pushed little grocery stores out of business. Around the same time his grandfather, Sid, who had served in the U.S. Air Corps during WW II came home and told the family about all the Army surplus items that could be purchased at a bargain. From 1955 to 1985, the store sold ammo cans, canvas tents, sleeping bags, mess kits, and in the wintertime, when camping wasn’t very active, they sold office furniture. In 1985, when Stern’s father, Neil, took over the store, the demand for more upscale outdoors equipment had already changed the store: Ray Ban sunglasses and Red Wing boots were on the shelves next to the combat boots. Some of the big brands in the industry didn’t like the idea of being in a surplus gear shop, so they changed their name from The Surplus Center to Casual Adventure. The name came from a contest they held in the community. “And the catchy slogan, ‘From Great Falls to Nepal’ — came from our Store Manager, Dave,” said Stern.

“That’s the thing about Casual Adventure,” Stern said, “it just keeps on changing. In ending the store as we know it on Washington Boulevard … we see that as an opportunity. Every generation has recreated this store, has shifted gears, has developed a new idea. “Stern’s father had died 18 months earlier. He never knew the store was closing but it wouldn’t have surprised him, Stern said. For 30 years, Neil Stern had said, “a street like this won’t stay the same forever; one of these days this block is going to go.”

Casual Adventure has been a family business, with each generation of the Sterns growing up in the shop and learning the business with the sense of community that made it more than a camping equipment store.

Stern’s father grew up in the area, went to Yorktown High School, placed a priority on family values, and helped individuals and groups in the neighborhood, a characteristic he passed down to his son. Every school in the Arlington area asks the Sterns for donations to their silent auctions, Arlington’s Little League, Babe Ruth League, and girls softball teams, Boy Scouts of America, Girl Scouts of America, Arlington Outdoor Lab and Arlington County Police Department’s Friends and Family Fund, all have benefitted from Casual Adventure’s community involvement. Casual Adventure supports Arlingtonians for a Clean Environment, Arlington Optimists, Potomac Overlook Park, and Youth for Understanding. On the 100th anniversary of the Girl Scout cookie sales, the Scout with the most creative post on the store’s facebook page got to sell the store $100 worth of cookies.

Eric Stern, now the fourth generation of Stern to run the store, majored in French in college, and wanted to go into sports production. But 20 years later, he realized the business he’d learned from the ground up, literally, sweeping the floor in his father’s shop, and washing the windows, Casual Adventure, was where he wanted to be. He missed the community involvement, the sharing of stories when someone came back from a trip, the time with his father. Working with his father was one of the great benefits of coming back. Few people have the pleasure of working with their fathers, Stern said, and “as much time as they spent together, now that he is gone, it wasn’t enough. Still, I get to sit at his desk every day ….”

His most distinct memory of time with his father running the store was Christmas Eve, when the last person would leave the store with the last gift; they would turn off the Christmas music, and sit together, and put “The Boss” (Bruce Springsteen) on the stereo and revel in the end of a hectic holiday season and having done it together.

One of the things clients have always loved about Casual Adventure is the wall of postcards and photos of clients wearing their gear in all four corners of the earth. The Sterns developed relationships with some of these daredevils: Andrew Towne was one of them. The store sponsored several of his climbs, which he did to raise funds for Youth for Understanding (YFU). Towne tried to reach Mount Everest in 2015 but was interrupted by the earthquake which killed 19 people at Everest Base Camp. When he finally did summit Everest, in 2017, he came back and spoke at the store, talking about how he survived the earthquake and avalanche. Towne stayed in Nepal to help triage the wounded and assist the sherpas. Towne has now, with his recent climb to Mount Everest, become one of the few people in the world (there are 149) to have climbed all seven summits. Casual Adventure sponsored his climb, which took place as they were announcing their closure: Towne said it was typical of the store that even as it was closing, the Sterns supported his climb and the YFA.

Stern says over the years, the store was approached many times to sell the building. It wasn’t pressure from developers as some have suggested, nor was it entirely the stiff competition from large retail stores like REI, Cabela's, and online businesses. What Casual Adventure has done well for years is provide personal service, and while sales did suffer from the internet sales popularity, many clients still came in for proper fits they couldn't get on line. That said, it was getting harder to compete with Amazon and the offers to buy out the store were looking more attractive. Stern has a son and daughter he’d like to keep the business for if they want it: going the way they have been for 60 years isn’t the way of the future, he said. His son, Ben, is 12, and his daughter, Samantha, is 11, and they have worked in the store just as Eric did, and his father did. When the children were younger, they got a dollar for helping set up in the morning, and were recently rewarded for selling $1,000 worth of merchandise. That doesn’t mean they will take over the business, but Stern wants it to evolve with the market, and remain healthy, well into the future. He hopes to be able to continue to serve the Arlington community, and is making plans for his next phase.

The good news is, Ben and Samantha, now both in middle school, will be able to spend time in the store for a little while longer. Casual Adventure’s announcement to customers announcing the sale of their building and “End of An Era Sale” led to a response beyond Stern’s wildest expectations. Stern said he is very grateful for the support Casual Adventure received from the community. They’ve decided to extend the sale — and their lease — at least through the holiday season. And if Ben or Samantha go to help their father on Christmas Eve this year, the chances are pretty good that Springsteen record is going to be put on the stereo in the back room of the store, to be cranked up full volume, and listened to by father and children, one more time.