ACCT's Trial of the 19th Century 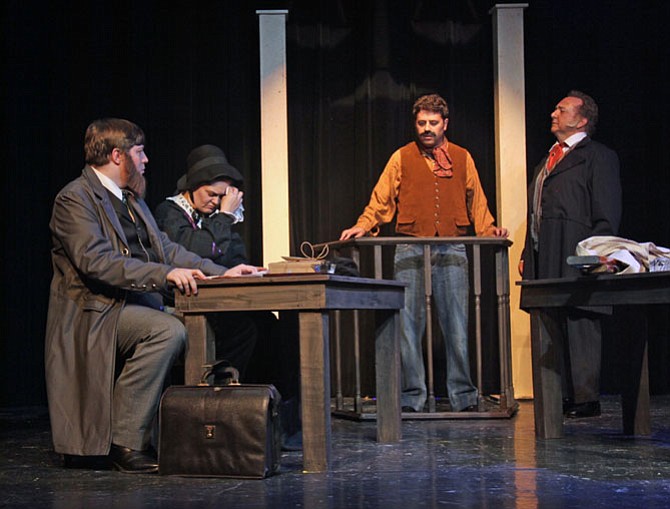 The play follows the aftermath of April 14, 1865, inside Ford's Theatre when actor John Wilkes Booth assassinated President Abraham Lincoln. Shocked by its first presidential murder, the U.S. government launched a dragnet to round up every suspect it could. Among those arrested was Mary Surratt, the widowed owner of a boardinghouse where Booth and others were alleged to have conspired. She was charged with conspiracy to commit murder and, along with seven male co-defendants, tried before a military tribunal convened by President Andrew Johnson especially for the occasion. The play is based on that trial.

Playwright Rich Amada said the Lincoln assassination trial was 19th century America's trial of the century. "Yet, most people today know little if anything about anyone implicated in the conspiracy other than John Wilkes Booth," he said. "I, myself, stumbled upon alleged conspirator Mary Surratt's story totally by accident. She holds the dubious distinction of being the first woman judicially executed by the United States government, so I thought to myself immediately that there must be a compelling drama behind that landmark moment in history."

He said that more than 150 years later, people still debate her guilt or innocence. "This play dramatizes the actual evidence the tribunal weighed, much of it in the exact words spoken by the people involved. That gives the audience the opportunity to be a surrogate jury, to sit in judgment of the play’s main character, and decide for itself whether she got what she deserved or was railroaded to the gallows," he said.

Director Eleanore Tapscott said although she does not believe Mrs. Surratt was intimately involved with the assassination plans, she believes she knew more than what she let on. "The focus for me is not so much about Mary's guilt or innocence, but what was actually done to her: her primary attorney, though ultimately diligent in his fight to have her sentence commuted, had no courtroom experience, and although a civilian, she was tried by a military tribunal rather than civil court. She was not allowed to speak in her own defense," she said.

She added: "Mary's experience shows how government can become tyrannical when given the opportunity, particularly when passions are at a fever pitch, as they were following Lincoln's assassination."

Producer Marg Soroos decided to produce the play because she knew the author and thought that the script was well written. "The chance to do a world premiere of a show was also an incentive to do this show. It is a part of our Civil War history that is not as well known," she said.

She said a challenge was trying to find a way to depict the many different locations on the stage. "The play needs to seamlessly move from flashback to trial and back to flashback with a minimum of distraction," she said.

Charlene Sloan plays the role of Mary Surratt, a compelling Southern Catholic, but above all a mother. "Her love for her children is the driving force in her decision-making and her fate," she said.

She said playing the role presented several challenges for her. "She was a real person but there aren't many clues as to what she sounded like or how she moved. So, I did a lot of research, which included reading news articles from the time period and visiting her house in Maryland and the original courtroom at Fort McNair," she said.

She hopes audiences will learn more about the case and maybe change or enrich their understanding of Mary Surratt and her role in the Lincoln assassination plot. "Any time a play changes minds, strengthens beliefs or just stirs conversation it's a major win," she said.

Michael Schwartz is playing two characters: John Lloyd and John Surratt, who is Mary's son. "John Lloyd runs Mrs. Surratt's tavern. However, I think he'd rather be a patron than an employee since he is known to enjoy a drink or two. He is quite good with his hands and does work around the farm. While I believe he means well, he tends to put his foot in his mouth," he said.

He says that his other character, John Surratt is "very passionate about his political beliefs. John is somewhat of a lost soul and is very impressionable when he believes something can give his life meaning."

The most difficult challenge, he said was making sure he created two distinct characters. "I don't want the audience to think when they see John Suratt that is just John Lloyd regurgitating lines in a different costume. They talk, walk, and communicate in completely different ways. Their motivations in life couldn't be more opposite. I want to audience to see that," he said.

Nicholas Barta also plays two different characters: John Wilkes Booth and Louis Weichman. "Louis is a good friend of the Surratts and is called testify during Mary's trial. Louis is an honest man who loves to spend time with Mary and her daughter Anna. So when he is called to testify he takes it pretty hard and is almost pushed to the breaking point," he said.

"John Wilkes Booth, as we all know, is the young assassin of President Lincoln. But this play delves a little bit deeper into what happened with Booth leading up to the assassination. We get to see a young, charismatic actor with a dark secret," he added.

Jim Pearson is playing the role of John Bingham, the Special Judge Advocate and Prosecutor. "John Bingham is a godly man, a politician, and a close associate of Abraham Lincoln’s. His soul cries for justice in this unheard of event – the assassination of the President and Commander in Chief. He is focused, relentless, and will crawl through anyone to get to his chief target, Jefferson Davis. Mary Surratt and her son John are in the way," he said.

He said the challenge was balancing Bingham's sense of morality — the treatment of women, his fellow man, his religious beliefs — with his burning desire to see justice. "These emotions are in constant conflict," he said.

Emily Golden is playing the role of Anna Surratt, who is Mary's 22-year-old daughter. "During the pre-assassination flashback scenes, Anna is portrayed as a happy young woman initially infatuated with John Wilkes Booth, the famous actor who comes to their boardinghouse. However, we also see Anna become increasingly distraught in the present time after the arrest of her mother, throughout the court proceedings, and just before her mother’s execution as the full magnitude of the situation hits her," she said.

She said the hardest part was trying to stay true to the historical truth of the character while finding a way to bring raw emotion to her portrayal on stage. "Some of the more emotional scenes in this play have pushed me further as an actress than I have had to previously explore. Feeling the weight of the energy needed to invest in these emotions while simultaneously remembering that Anna Surratt was a real person was extremely difficult," she said.

Aldersgate Church Community Theater is presenting "The Judicial Murder of Mrs. Surratt" from Sept. 29 to Oct. 15. Tickets are $12 to $15. Or $10 for group of 10 or more tickets. The venue is located at 1301 Collingwood Road, Alexandria. Visit www.acctonline.org.