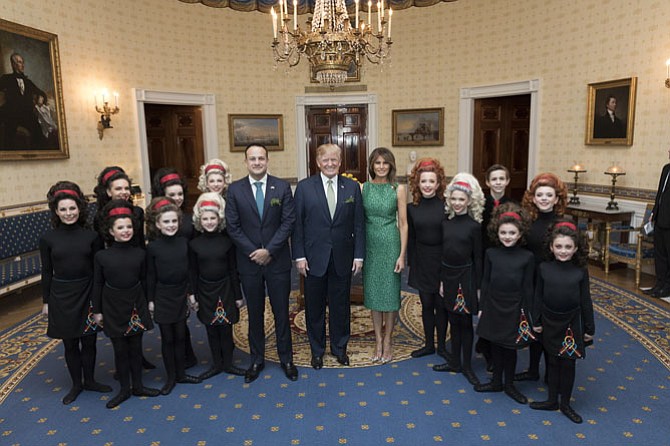 Dancers from the McGrath Academy of Irish Dance pictured at the Kennedy Center.

Local Irish Dancers kick it up at The White House and The Kennedy Center in celebration of St. Patrick's Day. As the President's guests entered the East Wing of The White House, Irish melodies echoed throughout the hall while rhythmic sounds of multiple shoes hitting the stage at precisely the same time, multiple times per second, greeted them. Dancers performed for members of the President's Cabinet such as Housing and Urban Development Secretary, Ben Carson. They posed for photos with White House Chief of Staff, General Kelly and with the President and First Lady, the Vice President and Mrs. Pence and the Prime Minister of Ireland Leo Varadkar. After having their picture taken, the President spontaneously asked if there was something they could show him. The dancers responded with a short treble reel step that ended up on the President's tweet. Dinner in the state dining room was enjoyed by these lucky dancers as they listened to the President's remarks and witnessed the annual Shamrock Ceremony.

With little time to rest, the following week dancers taught a basic Irish Step Dance master class followed by a performance on the Kennedy Center's Millennium Stage which was live streamed and saw over 14,000 views. Dancers from West Springfield High School, Sangster Elementary and South County High School, to name a few, returned to the Kennedy Center after dancing at their 100 Year Ireland Celebration a few years ago and were able to share their love for Irish Dance by welcoming both children and adults on stage and teaching them the steps to a simple reel. Class was followed by an energetic and entertaining performance which can be viewed online at the Kennedy Center website.

Dancers from the McGrath school compete in Regional, National, and World Level Competitions and perform at venues such as Union Station, hotels, weddings, pubs at National Harbor and in Fairfax and Georgetown, multiple parades, festivals, schools, senior centers and television. Classes are offered in Falls Church, Fairfax, Manassas and other locations throughout Virginia, West Virginia and Maryland. For more information, visit our http://mcgrathirishdance.com/