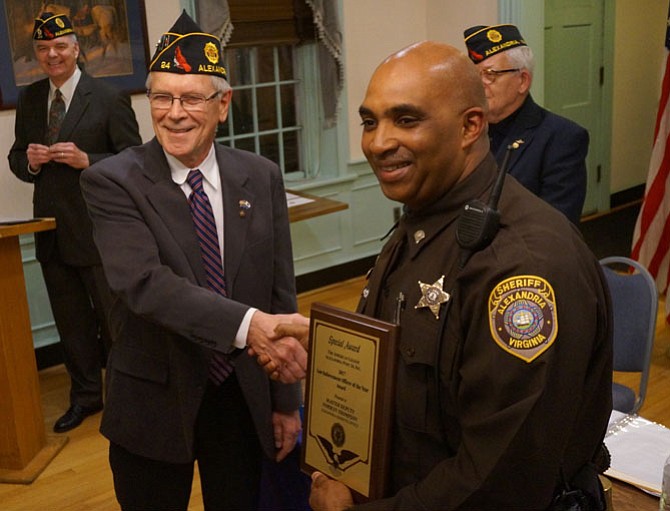 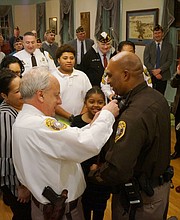 Alexandria Sheriff’s Office Master Deputy Norman Thompson was honored as the 2017 Law Enforcement Officer of the Year March 14 by the American Legion Post 24 in Old Town. A 15-year veteran of the ASO, Thompson was recognized for his service to the community as part of the Legion’s Homeland Security Support Program.

“We have always held our law enforcement comrades in the highest regard,” said Post 24 Commander Doug Gurka. “The Alexandria Sheriff’s Office in particular has consistently exceeded the highest professional standards.”

As part of the ceremony, Sheriff Dana Lawhorne spoke of Thompson’s work ethic and many contributions to the ASO, including his eight years with the Sheriff’s Emergency Response Team and as a team leader for the Sheriff’s Honor Guard. Lawhorne then surprised everyone in attendance by announcing Thompson’s promotion to sergeant.

“I was going to announce the promotion tomorrow morning,” Lawhorne said. “But with so many of Deputy Thompson’s family and friends here tonight, I thought it would be nice if he was able to share this moment with them.”

Thompson’s wife Teri, son Trey and daughter Ayla were in attendance at the ceremony. Joining them were Thompson’s parents, Elaine and Melvin Marshall, sister, Natalie Thompson, and Pastor Tony Ares with his wife Kim and children Courtney and Nadia.

Prior to joining the ASO, Thompson served four years in the U.S. Marine Corps and eight years as a volunteer firefighter for the Dumfries/Triangle and Montclair stations.

“This is a real honor,” Thompson said. “I am humbled by this award and very grateful to have the support of my wife, family and friends, not just tonight but every day.”