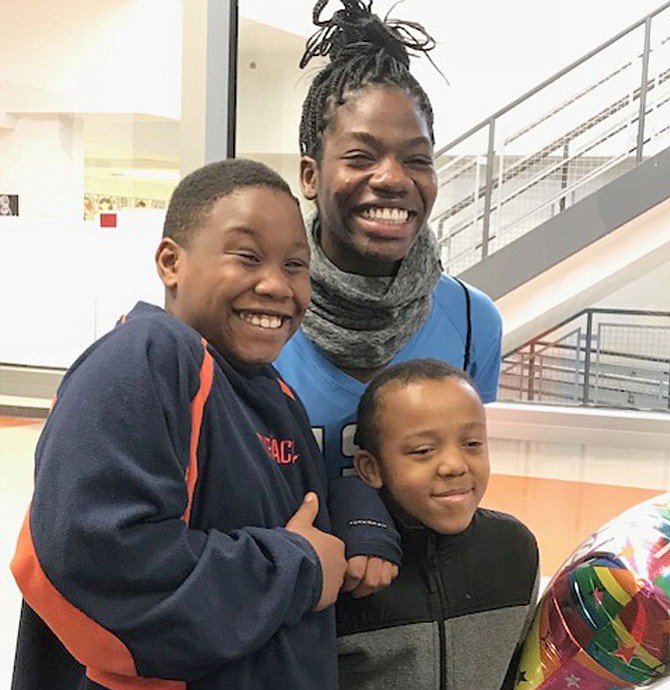 Olympic short-track speed skater Maame Biney returned to her alma mater, Terraset Elementary, for a surprise visit with students and some of her former teachers. Photo courtesy FCPS

Trademark grin on her face, South Lakes High student and Olympic short-track speed skater Maame Biney returned to her alma mater, Terraset Elementary, for a surprise visit with students and some of her former teachers. Biney said her “crazy journey” was the result of perseverance: setting a goal and sticking to it, and never giving up. She started skating at the age of five at Reston’s Skatequest, but her instructor told her she was too fast for figure skating and recommended that she try speed skating instead. Biney’s dad arranged for speed skating lessons, and Biney was off and running.

In the 2018 Winter Olympics in Pyeongchang, South Korea, she competed in 500 meter and 1500 meter short-track speed skating after winning the U.S. women’s championship in 500 meters.

She was the first U.S. African American female speed skater to qualify for the Olympics. A Terraset student in grades K-3 and 5-6 where she was known as Afua, she remembered her time at the school with gratitude and appreciation, recognizing teachers who took the time to build an academic schedule around her training sessions. Stressing that she was always focused in class, she reminded the students that responsibility is a critical part of their learning process. Biney, who loves chemistry, has a career goal of becoming a chemical engineer.