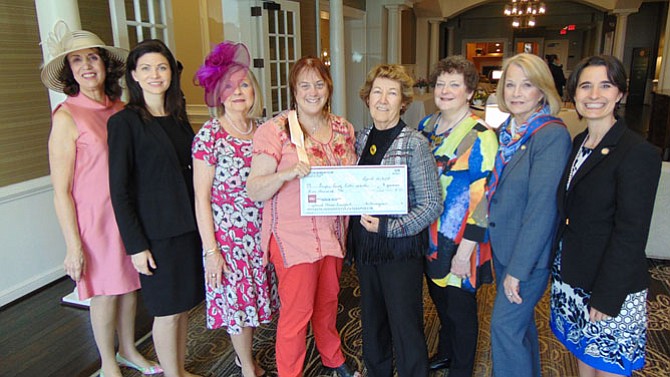 Members of the Oakton Women’s Club presented a $5,000 check to the Fairfax County Public Schools’ Food and Nutrition Services’ Breakfast After the Bell Program. Photo by Steve Hibbard.

Members of the Oakton Women’s Club who attended the Fashion Show and Luncheon on Thursday, April 12, 2018, at the Country Club of Fairfax. 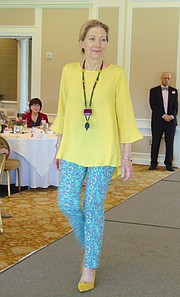 Sheila Dunheimer, Chair of the NoKid Hungry Committee for the Oakton Women’s Club, models clothing from Details of Occoquan during the Fashion Show and Luncheon held April 12, 2018 at the Country Club of Fairfax.

More than 100 guests attended the Oakton Women’s Club Fashion Show and Luncheon on Thursday, April 12, at the Country Club of Fairfax. The event raised $5,000 for NoKid Hungry and Fairfax County Public Schools to install a food kiosk at Luther Jackson Middle School. After an invocation from Pastor Dawn-Marie Singleton of Oakton United Methodist, guests dined on cobb salad and key lime pie. Then nine models who are members of the club, showed off the latest clothing designs from Details of Occoquan, owned by Cathy Campbell.

“The Oakton Women’s Club will be presenting a check to the School Nutrition Department to assist us in expanding the Universal Breakfast Program at Luther Jackson Middle School,” said Tracie Thomas, Fairfax County Public School System Food Service Operations Specialist. “Right now, the county has a little over 186,000 students and this breakfast card will allow more students the opportunity to receive breakfast once school has begun. Many children don’t have the opportunity to eat first thing in the morning, so the Universal Breakfast or Second Chance Breakfast will increase participation and allow more students the opportunity to eat and be ready to learn.”

THE SECOND CHANCE BREAKFAST is an alternative breakfast model where students eat breakfast during a break in the morning, usually right after first period. Currently, FCPS has no Second Chance Breakfast programs in any of the middle schools, which represent 7,600 students qualifying for free and reduced fee meals. Luther Jackson Middle School has the third highest number of middle school students qualifying for free or reduced fee meals.

Rodney Taylor, Director of Food and Nutrition Services with Fairfax County Public Schools, added: “Twenty-eight percent of our kids come from at-risk families; what that means is they’re at or below the poverty line and are food-insecure. We’re trying to make sure that when a child comes to school, they’re well prepared, well-fed and ready to learn, and the Breakfast After the Bell allows the students who don’t make it to the traditional breakfast in the morning, to have an opportunity after homeroom to get a Grab-and-Go breakfast and take to their next class.”

Linda Byrne, President of Oakton Women’s Club, which has been around since 1976, added: “We’re really excited about the project with the schools’ Second Chance Breakfast. It’s important that kids know that they can get this breakfast; it doesn’t matter whether you have an income or not, whether you can afford it or not. We want the prejudice against picking up one of those lunches gone. We want every kid to feel comfortable. Those kids who can afford to pay full price will do that and those kids who can’t won’t have to.”

Alyson McGill, Secretary, Oakton Women’s Club, added: “The kiosk will go to Luther Jackson Middle School, which means it’s the first middle school in Fairfax County to get this kiosk. And all students will be able to buy food from it. The advantage is with kids who are called ‘food insecure,’ those kids right now, even if they’re allowed a free breakfast, many don’t go to the cafeteria because they feel it’s a stigma, that everybody knows they can’t afford to eat. But with these, all students can get a card, and the kids who are on free and reduced lunches get the card free privately, and kids who are not can buy the card, and all students can purchase food for the kiosks.”

TONY SALGADO, Assistant Principal at Luther Jackson Middle School, added: “Breakfast is really important for all students, but specifically for middle school students. They’re going through a lot of growth in their lives, both mentally and physically, and it’s very important that they get their nutrition so they are prepared to do the learning and rigorous activities that we have planned for them each and every day.”

For more information about the Oakton Women’s Club, visit www.oaktonwomensclub.com.