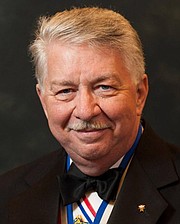 Patrick S. Korten of Great Falls, a Justice Department spokesman during the Reagan Administration, died Thursday, March 29, in Fairfax, after suffering a stroke. He was 70 years old.

The son of Margaret A. (O'Grady) and John S. Korten, he was born March 17, 1948, in Neenah, Wis. He was a 1966 graduate of Homestead High School in Mequon, Wis. and attended the University of Wisconsin-Madison, where he majored in political science. He was a founder and first editor-in-chief of the Badger Herald, an independent student newspaper.

He began his broadcasting career at the university radio station, and then worked at a local Madison radio station before moving to Washington, D.C., where he worked on the Congressional staffs of U.S. Reps. Bob Bauman and Barry Goldwater Jr., and at the American Conservative Union.

From 1975 to 1981 he was a reporter and anchor at WTOP News Radio, the CBS affiliate in Washington, D.C.

He left broadcasting to join the Reagan Administration where he was director of policy and communications at the U.S. Office of Personnel Management under Director Donald J. Devine from 1981 to 1985.

From 1985 to 1988 he was deputy director and then director of public affairs at the U.S. Department of Justice serving under Attorney General Edwin Meese III.

For 11 years, from 1989 through 2000, Patrick was a media trainer and consultant for Rowan & Blewitt Management Consultants in Washington, D.C.

He was senior vice president of the Supreme Council of the Knights of Columbus, a 1.9 million member Catholic fraternal benefit society, from 2004 to 2014. He retired in 2014.

He served as director of communications for the Virginia State Council of the Knights of Columbus and was a longtime member of St. Catherine of Siena Catholic Church in Great Falls, where he was a fourth degree knight, a lector, and a tireless volunteer.

He was also a member of the Ancient Order of Hibernians, an avid photographer, and a major fan of the Washington Nationals baseball team and the Green Bay Packers football team.

Patrick is survived by his wife of 44 years, Anita (Norfolk); three sons: Sean; Brian, and Patrick John; a sister, Jean Korten, wife of Carl Moser, and one granddaughter, Erin.