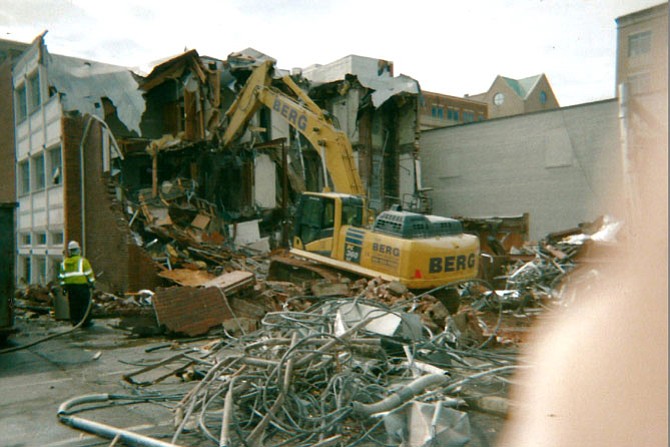 The demolition of the old Naval Reserve Association building.

It is broadly known that Councilmember Bailey already has a plan. He wants to raise the meals and hotel taxes. In other words he doesn't want the citizens of Alexandria to support affordable housing. He wants the visitors and tourists to do so. The problem is that these taxes end up hurting exactly the same people he is trying to help. Others who have used an increase in meals taxes for this and other purposes find that the overall impact is a reduction in the tips for the restaurant workers, so they now have even less to pay for housing. The same applies to the hospitality industry. Higher hotel taxes lead to lower occupancy, which means a loss of jobs or a cut back in hours for the low income workers in these hotels. It also means less tips for the cleaning staff.

If the city desires to have a diverse population and a housing stock that covers low income as well as middle and upper income individuals, it needs to come up with the money to do so itself. Furthermore, it needs to better preserve existing structures that could be readily converted into affordable housing rather than allowing them to be demolished to create higher priced housing. The latter is definitely in their power, since they approve these projects. As an example, Councilmember Bailey, along with the rest of the City Council recently voted unanimously to permit the destruction of the old Naval Reserve Association building on King Street (see photo) in favor of a luxury hotel. This would have been a great place for affordable housing. It is close to public transportation, shopping, and public spaces which ideally serve low income individuals.

Councilmember Bailey is not the only councilmember who says he wants more affordable housing but does not show the true conviction to make it happen. Most if not all of the councilmembers and the mayor are in the same category.

As you all know, the Democratic Primary is only about seven weeks away. This is your opportunity to express your interests by voting for candidates who are truly committed to your views and opinions. If you are indeed concerned about housing remaining affordable in the city, this is your chance to get rid of all of the existing council members and mayor. Vote June 12.