MCPS Releases Results of Tests for Lead in Water
Votes

MCPS Releases Results of Tests for Lead in Water

Less than 2 percent of fixtures fail. 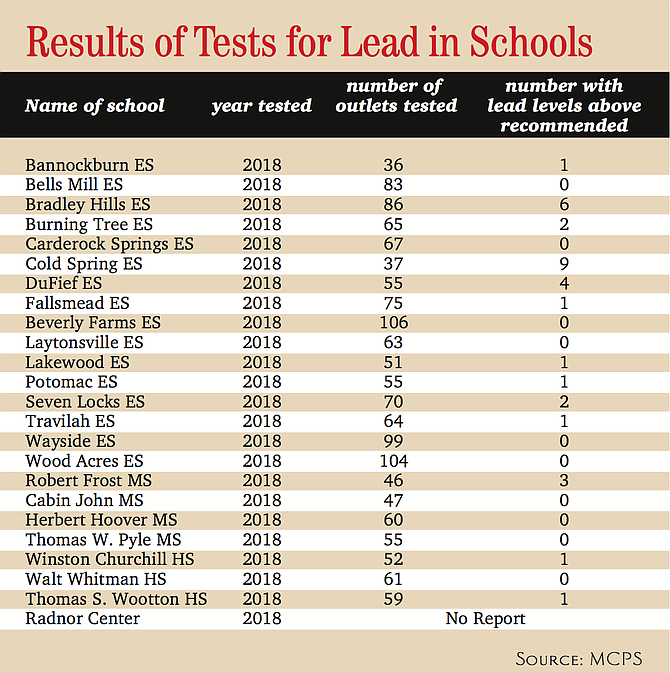 The results of a system-wide testing for lead in drinking water outlets in Montgomery County Public Schools revealed that less than 2 percent of fixtures tested above the EPA action level, according to a statement from MCPS.

“Montgomery County Public Schools (MCPS) is committed to the safety of our students and staff,” the statement said. “In May 2017, Gov. Larry Hogan signed legislation requiring public and private schools to conduct periodic testing for the presence of lead in drinking water outlets. In response, MCPS tested the drinking water in all schools prior to June 15, 2018.”

According to the statement, if test results from a fixture were found to be above 20 ppb (parts per billion), the action level designated by both the U.S. Environmental Protection Agency (EPA) and the Maryland Department of the Environment (MDE), MCPS removed the fixture from use. The fixture is not returned to service until post-remediation testing confirms the corrective actions lowered the test results below the action level.

In response to an inquiry about the Radnor Center, where Potomac Elementary School students will attend beginning in September, Sean Gallagher, assistant director of the Department of Facilities Management, Montgomery County Public Schools, replied, “… regarding water testing at Radnor Center. Because Radnor Center was vacant last school year, it was not tested during the spring semester with the operating schools. Maryland Department of the Environment (MDE) regulations requires testing when school is in session.

“However, we just completed water test at Radnor Center a few weeks ago in preparation for housing Potomac ES. We anticipate receiving the lab report soon, so that within the next week or so, all drinking water outlets at Radnor Center will have test results below the MDE action level, or be taken out of service.

“For MDE [Maryland Department of Education] regulatory compliance, we will also be testing all drinking water outlets at Radnor Center during the school year when school is in session.”

According to the Environmental Protection Agency (EPA) website epa.gov, “the EPA and the Centers for Disease Control and Prevention (CDC) agree that there is no known safe level of lead in a child's blood. Lead is harmful to health, especially for children.

“The Safe Drinking Water Act requires EPA to determine the level of contaminants in drinking water at which no adverse health effects are likely to occur with an adequate margin of safety. These non-enforceable health goals, based solely on possible health risks, are called maximum contaminant level goals (MCLGs). EPA has set the maximum contaminant level goal for lead in drinking water at zero because lead is a toxic metal that can be harmful to human health even at low exposure levels. Lead is persistent, and it can bioaccumulate in the body over time.

“Young children, infants, and fetuses are particularly vulnerable to lead because the physical and behavioral effects of lead occur at lower exposure levels in children than in adults. A dose of lead that would have little effect on an adult can have a significant effect on a child. In children, low levels of exposure have been linked to damage to the central and peripheral nervous system, learning disabilities, shorter stature, impaired hearing, and impaired formation and function of blood cells.”

The Centers for Disease Control and Prevention (CDC) recommends that public health actions be initiated when the level of lead in a child’s blood is 5 micrograms per deciliter (µg/dL) or more.

According to the CDC, “It is important to recognize all the ways a child can be exposed to lead. Children are exposed to lead in paint, dust, soil, air, and food, as well as drinking water. If the level of lead in a child's blood is at or above the CDC action level of 5 micrograms per deciliter, it may be due to lead exposures from a combination of sources. EPA estimates that drinking water can make up 20 percent or more of a person’s total exposure to lead. Infants who consume mostly mixed formula can receive 40 percent to 60 percent of their exposure to lead from drinking water.”